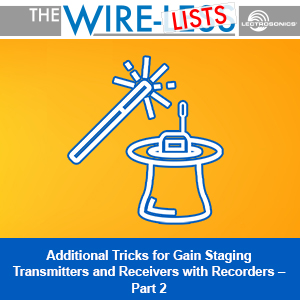 In our recent Facebook poll, many of you expressed interest in learning how to set up transmitter/receivers with recorders in an on-the-job scenario. Last week, we heard from Bal Rayat and Bruner Dyer. This week, we hear from Chris Howland and Steve Morantz.

Chris Howland is the founder of the LA Sound Mixers Group, a long-time Lectrosonics user and has worked on countless film and TV projects. Chris reports that “most of my gain staging is done by feel and the anticipation of the unknown.” The following numbers are his starting points:

From a VR Field Venue to a Sound Devices 688

Steve Morantz has worked extensively on TV productions – including Parks & Recreation, Entourage, Dead to Me, Just Add Magic and many others. Here, he shares his settings for the variety of mics and situations that he works with:

I run my receivers at line level as high as they go, +8 on the rack receivers and +5 on the 411 series. I have a Sound Devices SL-6 with Lectrosonics SRCs, and the default setting for that is -6. So for that system only, I use that setting.

I just finished up Season 2 of the TV show Mayans M.C., where we would put a boom on the biscuit (vehicle with camera arm) and record the motorcycle noise. For that, I would put the gain down all the way to 0 on the transmitter for the plug-ons.

For cardioid and shotgun mics, I run the gain on the transmitter usually around 28 and again, depending on the environment, I can adjust down to 17 or as high as 34.

Many thanks to Chris, Steve, Bruner and Bal for contributing to this feature!  Do you have approaches that have worked for you? Share them on our Facebook page or email us your This email address is being protected from spambots. You need JavaScript enabled to view it..