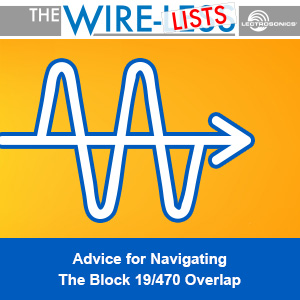 Have you ever been working with one of our systems in the 486-495 MHz range and they’re just not synching up? You might have performed a frequency scan prior to choosing your settings, so you’re sure you’ve chosen everything correctly. Or did you? You may have run into the not-common-but-it-happens Block 19/470 Overlap.

What Is The Overlap?

As we detail in our transmitter manuals, there is an overlap in the frequency range of 486.400 - 495.600 MHz. We designed this intentionally, in order to maintain compatibility with receivers that tune across a single band. The problem only makes itself known in specific instances where you are tuning within the A1 Band on either Block 470 or 19 and one device is set to block 470 and the other one is set to block 19. This can occur when the devices are tuned manually.

The Key To Sorting This Out: The Pilot Tone Squelch

Squelching is a way to mute receiver audio to discard noise when the RF signal is too poor to produce good audio. Our Digital Hybrid Wireless® receivers use pilot tones to ensure that the receiver is quiet when turned on and off and also to mute signals from other transmitters. Intermodulation (intermod) is the interaction of two frequencies that creates unwanted distortion. We designed our units to have a different pilot tone for each of the 256 base frequencies to prevent unwanted un-squelching when an intermod lands on a receiver channel. The overlap between blocks 470 and 19 within the A1 band means you can have the correct frequency specified, but since the transmitter and receivers are set to different blocks, the pilot tones, as indicated by your hex codes, don’t match.

When In Doubt - Check The Match

Checking this could save you a phone call or your gear an unnecessary trip to the Mothership. For other transmitter troubleshooting ideas, check our website’s Wired List #2.