Wire-Lists#19: ETSI standards, 75 and 50 kHz Deviation for Transmitters, and You 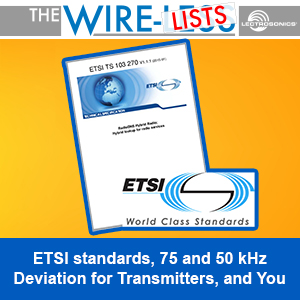 Along with the re-allocation of TV Frequencies in the US that were finalized in 2018 (and going into effect through July, 2020), regulations also have changed regarding the deviation of all new wireless microphone transmitters to a maximum of ±50kHz. For any questions about the spectrum re-allocations, repacks and new services in the 600 MHz band, see our page FCC & Spectrum Updates.

Since these changes were announced, many of you have called and written us, with understandable confusion: “Do I have to buy all new equipment?” “Is there any way that I can modify what I have?” This week’s post explains how this situation came about and what we and the industry have done/will do to make it easier for you.

What Is Frequency Deviation?

For starters, frequency deviation is used when discussing audio, to describe the maximum FM modulation of the nominal carrier frequency. The transmitter pulls the frequency away - both above and below - to signal an instantaneous analog value proportional to the difference from the presumed carrier frequency. The amount of differential is called the frequency deviation, and the larger the differential at the beginning and end, the larger the presumed baseband (audio) signal is. In practice, the deviation is limited to a specific amount (according to FCC regulations) to preserve the bandwidth and bleed over into adjacent FM channels. The modulator is limited to a maximum permitted deviation.

Why And How Did All This Come About?

ETSI is the global standardization organization for Information and Communication Technology (ICT) standards, and it affects how we design and manufacture our products. One of the specifications standardized by this organization is known as the “ETSI Mask,” referring to the occupied bandwidth of any radio transmitter, and the shape that that signal is allowed to have.

Starting on October 1, 2018, American manufacturers and dealers of wireless microphone systems were mandated to market devices operating with a maximum of ±50 kHz deviation, and conform to the ETSI Mask. This was to align the US with EU standards that have long been in place.

The FCC did not set the new final specs until July 2017 - the original specs (announced in 2015) were impossible to meet for a battery powered design. The four major manufacturers (Sennheiser, Shure, Audio Technica and Lectrosonics) who were actively engaged with the FCC appealed various aspects of those frankly unattainable specs (including power, deviation, spurious emissions, etc.) in December 2015 and did not get a final answer until the following July. We were already doing R&D for the wideband tuning units in 2015. By the time the final regulations were agreed upon, our wideband units were already being lab-certified.

As a result, any transmitters manufactured or sold after October 18, 2018 have conform with the new regulations and also must, regardless of previous testing/certifications or modulation/deviation of pre-existing models, be retested and re-certified under the new rules (the ETSI mask). We re-tested and re-certified 13 unit models (SM Series, LT, LMb, SMWB Series, SSM, HMa, HHa, and IFB T4) and the FCC issued new acceptance numbers for them.

How Does This Affect Me?

The difference between the ±50Khz deviation and ±75 Khz is not as critical as you may be concerned about. In a quiet/sound neutral environment, when you are challenging your gain, you might hear a difference. In the vast majority of circumstances, you won't hear anything - or it won’t matter. For example, the 941 band units are already at ±50Khz since their inception in 2018.
Here is a case-by-case evaluation, depending on what units you have:

So why has it taken years to get to this point? First, we were told to stop building to the old specifications as of October 2018. We could not build the ETSI mask into the transmitter before that because, as explained above, the new specs were not finalized until last July – we had to redevelop what we were working on (more than once…) to meet the specs as they changed. The test labs responsible for certifying these units also had to learn the new specs and develop verification testing procedures. Additionally, the FCC won't allow a new spec transmitter to have both types of modulation available or selectable. We intentionally waited to make any announcements about our products until we were confident of the new rules and had solutions for our customers lined up and available.

How Can I Tell Which Units I Have?

If the unit has a stick-on metallic label as opposed to the designations being engraved on the housing, you can tell the older units from newer ones by examining the FCC ID on the label. The old (±75kHz) units have a blue label and the new (±50kHz) units that have been re-designed and re-certified have black labels and a slightly different layout: 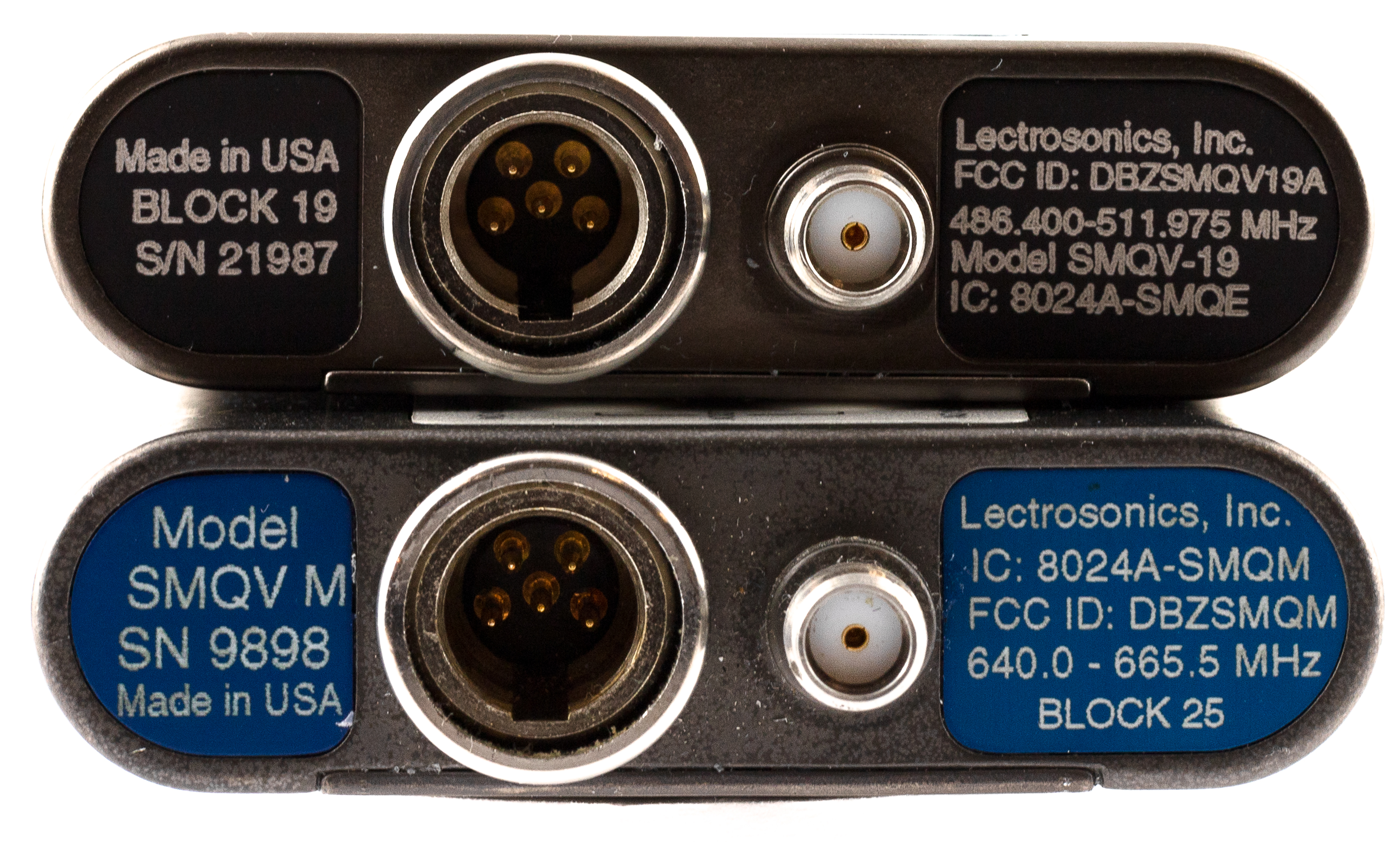 The newer units have an FCC ID that contains an "A" after the band designation.  Let’s use the LMb as an example:

For block-wide units, the naming system has also been revised. The older units shared a common FCC ID for several blocks. A band designator of E, L, M, or H corresponded to bands A1, B1, C1, and D1 respectively. Now, each block gets its own FCC ID:

If you are an export dealer (depending on your country’s regulations), it is still possible to order former US spec models (with ±75 kHz deviation), in Bands A1, B1 and C1, in all frequency blocks, with the following understanding:

All of this is brand new territory for anyone involved in the audio industry, so you are by no means alone if you’re overwhelmed or confused. We’re happy to answer any further questions you have regarding the standards, the deviations or how they relate to your equipment. Give us a call or send an email – we’ll be happy to discuss it with you.