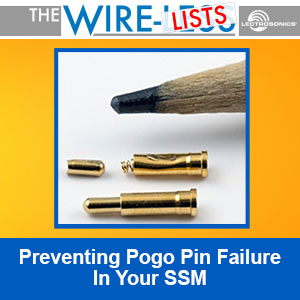 Are you having issues with battery drain or inconsistent power in your SSM, in spite of using fresh batteries each time? Are you hearing an odd, intermittent scratch-click that you can’t trace to any of your other equipment? If you’ve checked everything else, the problem might just be a pogo pin.

What is a pogo pin?

A pogo pin, which is a common term for the positive battery spring contact and is used in the design of all electronics using prismatic (square) batteries, is so-called because it acts like a toy pogo stick. Though they look like solid pins if you look into the battery case, pogo pins are two part housings, with an integrated helical spring inside that applies a constant normal force against the back of the contact plate. This spring counteracts any unwanted movement which might cause an intermittent connection with batteries. They’re very small parts – smaller than a pencil lead - that can cause big problems if they malfunction. Pogo failures don’t happen very often with Lectrosonics products, but they can happen. Most maddeningly, if one is the cause of an SSM’s visit to Repair, it’s one of the less obvious, head-scratcher things that can happen. As they say, You learn something new every day. Fortunately, the causes of most pogo pin failures are 99.9% within your control (the other .1% being manufacturer defect).

This photograph shows a pogo failure that ended up being caused by a compressed/bent/jammed pin. Why is this a problem, and what can you do to prevent it? 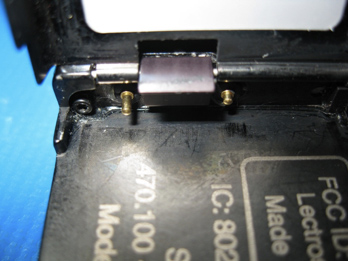 The role of pogo pins in electronic devices

First, a short tutorial on prismatic batteries and how they relate to pogo pins:

Prismatic batteries – the square batteries that are used in the SSM and likely more units that we design down the road - have highly compressed cells and are popular in small footprint electronics like ours. They have nickel tabs, shown as small square windows, for contacts, recessed around 1mm from the battery top. Two sample configurations of the many that are possible, showing their relationship to the pogo contacts, are shown below. There isn’t a pogo “standard” as far as configurations. Each battery manufacturer designs their own (Panasonic manufactures custom ones for our SM). Equipment designers,  if they are using off-the-shelf batteries, then design products to utilize the most efficient batteries available that fit the need.

The battery contacts that are built into the equipment need to have sufficient travel to penetrate the recess and apply sufficient contact pressure to minimize contact resistance. Resistance, for those of you who are unfamiliar with the mechanics of electronics, is the measure of opposition to current flow in an electrical circuit. Minimum travel of 2.5 mm and minimum force of 200 grams are used to create the energy that powers your electronic device and assure reliable performance in high-drain devices. This requires POGO pins that are flexible, but not too flexible. It’s a fine balance.

I think a pogo pin is bent (or I’ve been told that’s the case)! What happened?

An easy way to check for a damaged pogo pin in an SSM is to lightly – very lightly – press on it with a Q-tip or the eraser end of a mechanical pencil. If you apply slight pressure to the head, you should feel it compress. If the pin doesn’t move at all, it’s confirmation that it is damaged and needs to be repaired. If you hear an intermittent slight scratch or click that you can’t trace back to anything else, it may also be a pogo pin, trying to expand and contract and getting stuck.

Pogo pins can be damaged in the following ways:

1. Putting batteries in the wrong way. This is the reason why we engrave battery direction on our housings and are so explicit in how we explain battery installation in our manuals – because inserting batteries incorrectly can damage these delicate pins.

2. Corrosion damaged the pin. The most common way that this can happen is from sweat. And it’s why we are so insistent on using a covering of some kind for high-moisture applications. Once the moisture gets in, you can’t get it out!

3. Incorrect cleaning. This can also cause damage and corrosion. Never spray any type of contact cleaner or petroleum-based solvents (such as WD-40) directly onto pins. Instead, apply a small amount onto a Q-tip or paste brush and apply only to the contact pins while holding the unit upside down. This will prevent liquid from seeping inside.

Don’t be one of less than a dozen annual SSM pogo pin failure cases! Follow the steps here and you’ll be good to go for years to come.