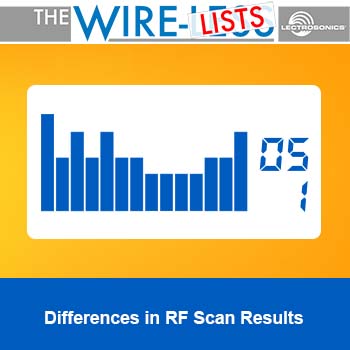 We often have customers ask about the scan differences between receivers. While we attempt to keep the performance equal, there are many variables that make scan perfection difficult (near impossible) to attain. All receivers and transmitters are aligned, and quality tested for proper operation within a 2-3% tolerance for sensitivity, level, frequency response, power output, etc. Even with the tight tolerances there are variations in components specifications that will impact the displayed RF metering.

The main IC that controls the RF metering is a commonly used, moderately priced device. The RSSI (received signal strength indicator) output is decently linear at the middle of its range but somewhat non-linear near the lower and upper limits of use. Given the lack of display resolution (columns are only 12 pixels) and the limitations of the RF metering, some differences will be noted. Most often the differences noted in the metering, either showing too much signal or too little on one unit as compared to another, are minor. It can be possible for one device to show slightly high RF signal, while the other shows slightly low signal making the differences seem greater than reality.