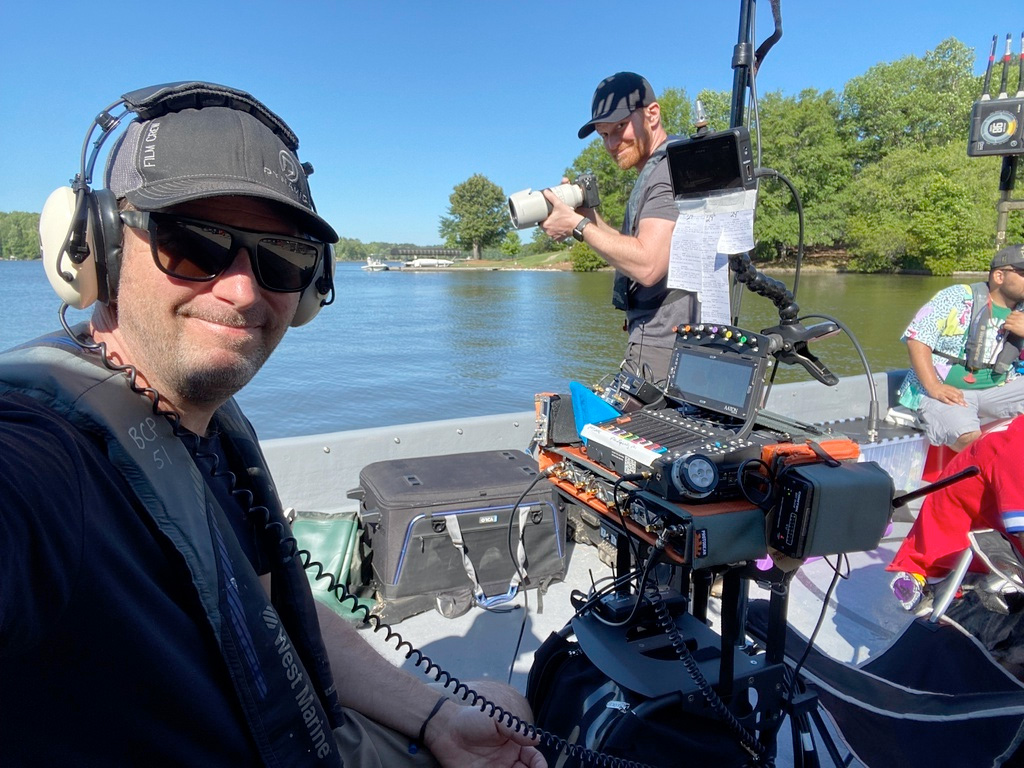 “The Lectrosonics wireless equipment we use is just cornerstone to our success on a film set.”

Atlanta, Georgia (October 18, 2022) — With the popularity of streaming services today, production value expectations for TV series is on a par with feature films, often on a tight timeline, which means close attention must be paid to production values for both picture and sound. The new Hulu series Tell Me Lies clears this high bar with production sound recorded and mixed by Michael Wynne, CAS,  using his extensive arsenal of Lectrosonics wireless, including SMQV dual battery belt-pack and IFBT4 transmitters as well as SRc dual-channel slot mount, UCR411a compact and Venue modular receivers, and units from the D² Series, including the DPR plug-on transmitter and DCR822 dual-channel compact and DSQD 4-channel receivers.

Michael started his career in the late 90’s recording and mixing independent artists at Atlanta based APC studios.  As a musician, he initially begun working with picture as a film composer, landing his first feature film in 2004, Sandtown with writer/producer Danny Fendley. On this film he was introduced to Atlanta based post house White Dog Studios, where was mentored by re-recording mixer Curt Bush, working as an independent composer and sound designer at his facility on commercials, short films and independent features.  It was here that Michael truly fell in love with process of mixing sound and picture and later got the opportunity to start production mixing on short films and commercials on set. In addition to Tell me Lies, Michael has worked on hit TV shows such as FX Atlanta, Starz P Valley, Netflix’s Raising Dion and BET’s American Soul.

For his booms on the series, Wynne opts for a full D2 digital stream with two DPR digital plug on transmitter units and two DSQD four-channel digital receivers. What he likes most is the clarity of sound, and he used this digital setup for the full run of Tell Me Lies. The D2 system transmits the 24-bit/48 kHz studio-quality digital audio bitstream using digital RF transmission technology that includes digital-only features such as encryption. He adds that the onboard recording and time code jam sync capabilities of the digital transmitters also allow them to do things like occasionally record a wild line as needed.

For interiors Wynne typically deploys the Schoeps Colette CMC141 (MK41 supercardioid condenser capsule with a CMC 1 U amplifier and CUT60 low-cut filter). On each boom, the DPR transmitter simply plugs into the CineLa suspension mount, for what he says is “an extremely low-profile, lightweight solution that the boom operators love.” He always works with two booms when possible. The boom mic, he explains, is one of the most important on the set because it provides the most natural, picture-matching experience for the viewer. That said, bodypack wireless with lav mics are also vital because many scenes are shot with multiple cameras where it may be difficult or even impossible to put the booms where they would need to be and still keep them out of the frame. Wynne says, “The Lectrosonics wireless equipment we use is just cornerstone to our success on a film set.”

With so much sound capture relying on wireless, Wynne is grateful to Lectrosonics for making even their new digital products backwards compatible with the digital hybrid products. He currently has 16 legacy digital hybrid transmitters in various blocks, but his new D2 receivers work with all of them. He even bought his first digital receiver, the DCR822, before he had bought his DPR digital transmitters. But the receiver could receive all of the UHF TV spectrum and was compatible with both his existing transmitters and the ones he planned to buy in the future. Therefore, he has been able to use all his Lectrosonics gear as needed and keep within the same ecosystem without having to redesign his systems when adding something new.

The DCR822 resides in Wynne’s smaller sound cart with his Aaton CantarMini 16-track portable digital mixer-recorder, while his DSQD receivers are in his larger main cart. The DSQDs connect to the Cantar mixer-recorder via Dante, for a full digital path with no conversions necessary. The difference in clarity with this configuration, he says, is like listening to a high-resolution playback versus an MP3. The performances in Tell Me Lies, he explains, are very dynamic; the actors can range from a whisper to a scream, and the clarity and low noise of the Lectrosonics digital transmission path was paramount to capturing dialog that was going to translate well in post. Formosa groups dialog editor, Jason W. Freeman for Tell Me Lies reached out to Wynne to remark on the quality of the boom sound in post, and how remarkably clear and good the sound was.

Reliability is also a favored quality of Wynne’s Lectrosonics kit. Although he keeps HMa plug-on transmitters on hand for backup to his DPR units, he hasn’t had to use them. “The reliability is very important. It has to work,” he explains. “They really proved themselves on Tell Me Lies. We want to deliver the best possible raw isolated tracks.” He says the transmitters’ battery life is terrific with the lithium Energizer AA cells he uses; there were times they went the whole day without having to change.

A film set, Wynne says, is a hostile, less-than-optimal RF environment. A robust wireless system that can survive and deliver is a must.  In a major market like Atlanta, on a large-scale film set like this one, the RF environment is often very congested, with Teradek camera transmitters operating in 5G, Preston focus systems operating on 2.4 GHz, all the personal mobile phones and Bluetooth devices, plus all the UHF TV channels occupied by broadcasters in Atlanta. The Lectrosonics gear met the challenge.  On the other extreme, the show also had a shoot on the water, on Georgia’s Lake Oconee. The RF environment was quiet and almost pure, and they were able to connect boat-to-boat at unbelievable distances Wynne estimated were up to 300 meters, or about 1000 feet.  In this scenario, Wynne also deployed Lectrosonics waterproof digital hybrid transmitters with DPA 4060 lavs hidden in the life jackets with the help of the wardrobe department seamsters.

Well respected within the film, broadcast, and theatre technical communities since 1971, Lectrosonics wireless microphone systems and audio processing products are used daily in mission-critical applications by audio engineers familiar with the company’s dedication to quality, customer service, and innovation. Lectrosonics received an Academy Scientific and Technical Award for its Digital Hybrid Wireless® technology and is a US manufacturer based in Rio Rancho, New Mexico. Visit the company online at www.lectrosonics.com. For spare parts and a full line of accessories, visit the company’s online store: Lectrosonics U.S. Online Accessory Store.