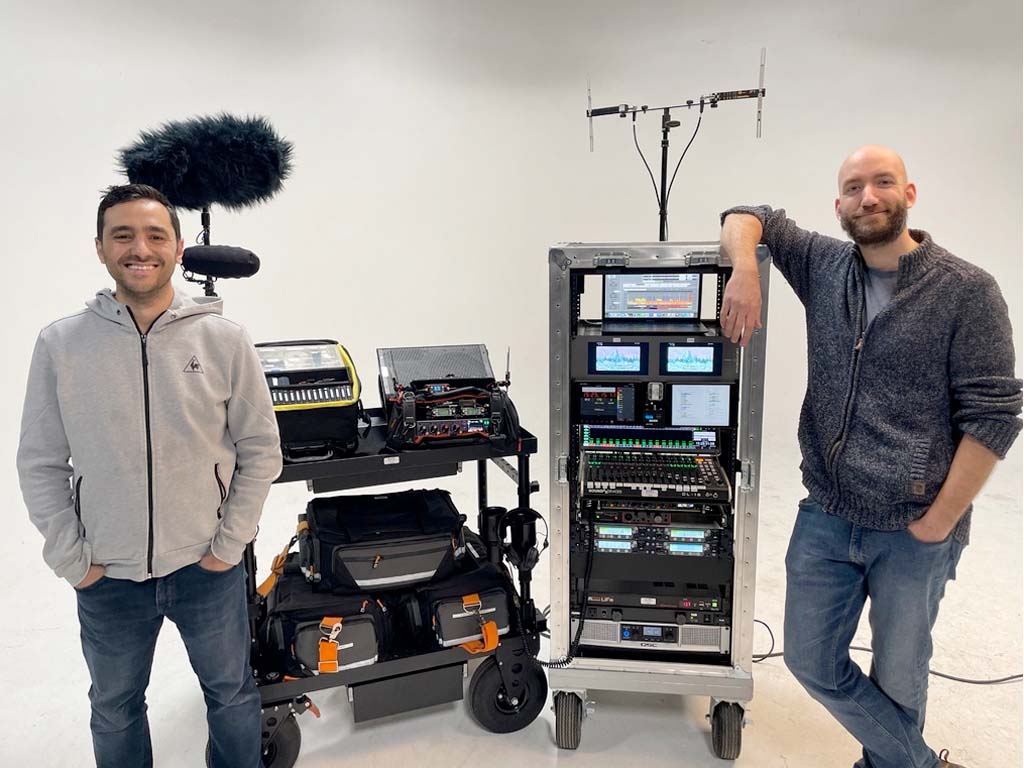 “The fidelity of Digital Hybrid Wireless was already better than any other gear we’d previously heard. But the new all-digital stuff is a level up.”

Toronto, ON (January 5, 2022) — Audio Process is the premier one-stop shop for location recording, post-production and studio recording in Toronto — the third busiest media production city in North America after Los Angeles and New York. From feature films to commercials to sports to Netflix’s hilarious Trailer Park Boys, no job is too big or too complex. The team are longtime Lectrosonics users, and recently made the leap from their beloved Digital Hybrid Wireless to the fully digital D Squared line. Their cart and bag rigs run the gamut of digital receivers: DSQD four-channel, DCR822 dual-channel, and DCHR compact stereo units. Sending signal to these is a host of DBSM body-pack transcorders, the DPR-A plug-on transmitter for boom work, and DCHT camera hop transmitters. Communications are all-digital as well, thanks to the M2 Duet system’s four-channel M2T transmitter paired with M2R beltpack receivers.

As any audio pro knows, upgrading even a single piece of equipment amid ongoing projects and deadlines can be hair-raising. Audio Process, however, found their massive migration to be just the opposite. “We dove into the Lectro digital world headfirst,” says lead location recordist Rob Morrice. “This past summer we did a show which follows a teenager who wins a singing competition, not unlike The Voice. It covered the behind-the-scenes of his life and the other contestants and was challenging because at any time we were jumping between musical performances and scripted scenes, with as many as eight talent members at a time needing wireless. We used the DBSMs and DSQDs in this application, and with those plus comms for producers, there were a lot of frequencies flying around. It all worked flawlessly the first time out.”

When asked what improvements are noticeable in the D Squared system, Morrice doesn’t need to pause to think. “First and foremost is range,” he explains. “The legacy gear — say, SMVs being picked up by SRCs — was always pretty robust. But with any transmitter, you could get dropouts or a bit of a noise floor if you got out of range. The DBSM doesn’t do that. First of all, the range is just phenomenal. Second, if you do push it too far, you just hear a little roll-off of the high end and that’s how you know. But that hasn’t happened on any actual show I’ve used them on. I haven’t had to worry about signal issues, especially for my critical talent mics.”

“This has improved our workflow on all our productions,” adds co-owner and location recording manager Ryan Altschuler. “We fly our ALP690 antennas close to set. That lets us keep the cart a lot farther back, which is important as a Covid precaution. “This was helpful with the Hybrid kit, but with the D Squared it has been even more rock solid in terms of range.”

Speaking of range, the crew also discovered that Lectrosonics’ digital camera hop equipment is great for more than camera hops. “We recently did a car-to-car shoot for Rogers, the telecom company that also co-owns sports teams like the Toronto Maple Leafs,” recalls Altschuler. “So, dialogue is going on in the film car and we’re in a chase vehicle. Several plant mics were hardwired into a Sound Devices mixer, which was then sent to us using a DCHT and SNA600 antenna flown on the exterior of the car. We in the chase vehicle had two more SNA600s outside and a DCHR inside and were shocked at how far ahead of us the film car could get while we still had crystal-clear reception.”

Audio Process flags wideband capability as the next virtue of the D Squared system. “We got the same chop as in the U.S.,” says Altschuler, referring to the reduction of RF spectrum available for location production. “We have 470 to 608 MHz and that’s it. The beauty of the new digital stuff is that everything covers that entire range. That kind of flexibility is huge for us. If Rob does a travel shoot in L.A. or wherever, we don’t have to research which bands are available. We can just show up, scan for available frequencies, and flip everything to the right settings.”

Key to that process is Morrice’s favorite Lectrosonics tool, Wireless Designer software, from which he coordinates all connected devices. “Wireless Designer may be the biggest single improvement in my workflow I’ve experienced,” he beams. “To see the spectrum at the resolution it does and then control everything centrally in real time is a game-changer. For example, let’s say a separate crew shows up on short notice to shoot ‘making of’ material for a press kit — it happens. If they’re scanning on their own, they’re rolling the dice and might step on me. With Wireless Designer, I can allocate them the frequencies they need. For anything more than a handful of channels, I don’t work without it.”

Conserving bandwidth applies just as much to comms as to talent channels, a circumstance that earns the M2T high praise from Altschuler. “Because of the type of shows we’re doing, we’re moving up to three and sometimes four channels of comms,” he explains. “Not only does the M2T fit four channels into a half-rack, but four mono sends only take up two RF carriers.”

The team also found out, in an unnerving way, that their new digital gear sacrificed nothing in terms of Lectrosonics’ well-known resilience to abuse. “We were working on a TV movie where this city slicker character is learning to paddle a canoe,” recalls Morrice. “The canoe was stabilized with a rope on either end. I received every assurance that it wouldn’t tip, even though the talent was supposed to look like she’s tipping when she takes a selfie. I guess she was too good an actress! She was in the water a full minute, with her DBSM and mic. We removed the battery, dried it out, and fired it up the next day. It worked fine, with no perceptible impact on performance.”

Audio Process insists that performances include impeccable audio quality across the board — another area where the D Squared family exceeded their expectations. “We do a lot of post-production as well,” notes Altschuler. “We’d heard there was a big difference on paper in terms of lower noise floor and more headroom. When you actually listen in post, it’s very discernible.”

“Clean, clear, low end is more important than you’d think for dialogue,” adds Morrice, “and the DBSM and DSQD and other new digital devices deliver. The fidelity of Digital Hybrid Wireless was already better than any other gear we’d previously heard. But the new all-digital stuff is a level up.”

Audio Process has built their keen understanding of how to capture and treat audio through years of experience on set and in studio. With over 50 feature films under their belt, plus extensive experience with reality shows, episodic television, commercials and more, there is no project too big or small for the team. In addition to their full-time team, Audio Process employs over 80 contract-based location sound recordists, post-production engineers, music producers, service technicians, and administrative staff. Their team includes NABET, IATSE and DCG union members, award winning engineers and specialists in all facets of audio production. No matter the size or scope of a project, Audio Process has the staff and skill required to suit their clients’ needs. www.audioprocess.ca