Audio For "The Don Juans" Captured With Lectrosonics Wireless Technology 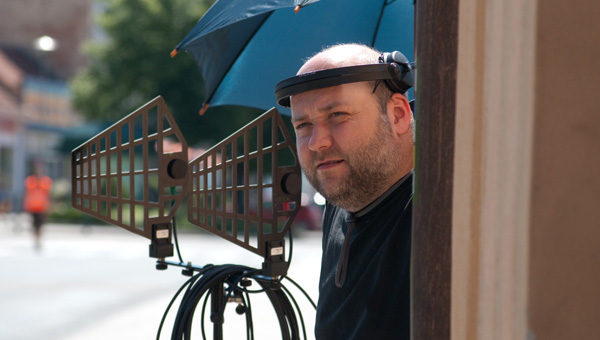 Prague, Czech Republic – January 2014… The Don Juans, loosely based on the opera Don Giovanni, is a comedy about sex and love and infidelity by Oscar-winning Czech director Jiri Menzel. The film stars Jan Hartl, Libuse Safránková, and Martin Huba. For this MediaPro Pictures and TV Nova film project, both location and post production audio was handled by Radim Hladík. It was a major endeavor for one person, but the location sound aspects of the project were made easier by his use of Digital Hybrid Wireless™ technology from Rio Rancho, NM-based Lectrosonics.

Based in Prague, Radim Hladík is a location sound engineer, sound editor, mixer, and sound designer. He was tasked with a myriad of audio production responsibilities on The Don Juans, including ADR, Foley, sound design, and mixing. All location sound for the film was collected using a combination of six Lectrosonics SMQV super miniature beltpack transmitters and a pair of HM plug-on transmitters. On the receiving side of the equation, Hladík used the Lectrosonics Octopack portable multicoupler outfitted with four SRb dual channel slot mount ENG receivers. This system was augmented by the use of Lectrosonics ALP500 log periodic dipole array antennas, the RM remote, and the LectroRM app for Apple’s iOS-based smartphone. He discussed the project and his use of the Lectrosonics equipment.

“I’ve been very impressed with the performance of Lectrosonics’ equipment,” Hladík reports. “The audio quality is excellent and, of course, this is the most important aspect of any audio gear. What really impresses me is the ease of operation. Finding available frequencies is accomplished quickly and the range of the equipment is equally impressive. Further, field production is hard on all electronic equipment because you never know whether it’s going to get dropped, get wet, or be exposed to countless other hardships. And this is where the Lectrosonics equipment really shines. It’s extremely reliable and well built.”

Hladík was equally complimentary on the SMQV’s compact form factor and the ability to access the transmitters with the RM remote. “The SMQV’s are extremely compact, which makes it much easier to hide them on the actors,” Hladík explained. “And with the RM remote, I can adjust the transmitter’s level, change frequency, or just put the unit into sleep mode without ever having to disrupt wardrobe. With its dual battery design, it also lasts a long time so I never have to hold up production just to replace a battery.”

All of the Lectrosonics equipment used on The Don Juans was procured through Bystrouška s.r.o. in Prague. When queried about his customer service experience, Hladík was equally complimentary. “Bystrouška is a first-rate operation,” he says. “The company is very responsive and any questions I might have get answered quickly. If they don’t know the answer right away, they get it from Lectrosonics and convey that information to me. I’ve been very impressed. The performance of the Lectrosonics equipment and the quality support of my dealer provide a high level of confidence when I’m on location.”

Before turning his attention to an upcoming project, Hladík offered these parting thoughts, “I’m a big fan of Lectrosonics. The company builds solid products that really make life easier on the set. I'm glad that I could use Lectrosonics on this project and look forward to working with more of their products in the future.”