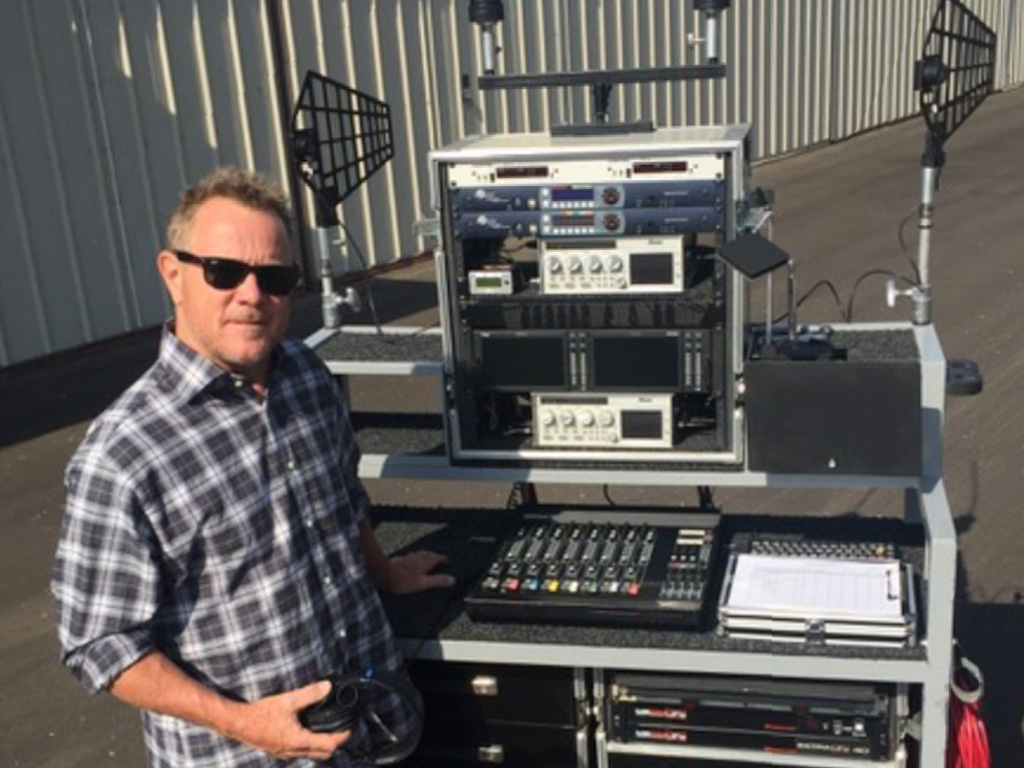 “The one brand I’ve never wavered on is Lectrosonics. It has never failed me in tens of thousands of hours use, all day, every day, all around the world.”

If there’s a senior Jedi of sound for Hollywood productions, it’s Geoffrey Patterson. Over 40 years, his work has made him a two-time Academy Award nominee, a nine-time Emmy nominee, and a 12-time nominee and three-time winner of the Cinema Audio Society Award for Best Sound. He has mixed films including Twister, The Usual Suspects, Transformers: Revenge of the Fallen, The Wedding Planner, Friends with Benefits, Along Came Polly, Apt Pupil, and many more. A sampling of his TV credits comprises Westworld, Deadwood, True Detective, Perry Mason, and Bosch. At the end of 2021, he traded field work for mentorship, becoming Professor of Production Sound at USC’s School of Cinematic Arts.  Throughout his career he has used Lectrosonics exclusively, such as SMQV transmitters, the Venue receiver series, and many other members of the Digital Hybrid Wireless family for recent work. In fact, he has used almost every generation of Lectrosonics wireless, as his stable began with the original VHF Quad Box, then the UHF Six-Pack, then the first generation of SM-series transmitters, and almost every product thereafter. This experience puts Patterson in a unique position to share his knowledge about the evolution of wireless and sound-for-picture.

Tell us about your early experiences of recording sound for picture and the tools you had available.

For most of its 100-year history, production — not to mention designing and manufacturing the tools for it — had been a relatively small business. The studios had their slate of movies, and the “big three” broadcast networks — ABC, CBS, and NBC — put out maybe 50 scripted shows in total. If you were going to manufacture something like a camera or sound equipment, you were not going to have a large customer base. So, there was not much financial incentive to put in all the R&D for something you’re only going to sell 50 or 100 units of.

When did wireless first appear on the scene and what was the industry’s reaction?

Things slowly started to change beginning in the 1960s, with more portable cameras from makers like Arri and Panavision enabling more freedom of movement and hence creativity. That coincided with the arrival of the Nagra audio recorder, which ushered in sound being recorded separately from the camera, albeit on a single monaural track. As for multitrack recording, the Beatles and the Beach Boys were already using it creatively, but it would take the film sound world another 50 years of evolution.

I started working as a (wired) boom operator in Hollywood around 1980, and it was at that point that wireless mics were just starting to be used. They were at best “acceptable” for limited and judicious use. Lavalier mics were also large and made to be worn on newscasters’ lapels, not hidden under actors’ wardrobe. So, sound mixers avoided using radio mics.

The good news was, most all film production was done using one camera. Most sound mixers opted for plant microphones and shotgun mics placed on the frameline and pointed at the person who was talking. Common refrains (excuses?) were, “We’ll get the dialogue in coverage” and, “It’s all perspective sound.” Meaning the person closest to the lens should sound more present than the person further away.

That doesn’t sound like a rosy picture, for wireless. What led you towards it?

I worked pretty much nonstop as a boom operator throughout the 1980s, mostly doing episodic television and movies of the week. Two of the best mixers I ever worked for were David MacMillan and Jim Webb, hall-of-famers who had very different styles. But they had one thing in common: They were never content with “that’s how we’ve always done it.” Webb was a very early pioneer in multi-track recording, having done several films with director Robert Altman. MacMillan just knew how to make films sound good. He was never afraid of multiple radio mics and blending them in and out of the booms.

I felt the freedom experiment and “play” on those low-budget films like crazy. I worked hard to learn how to make radio mics sound like wired boom mics, and how to play them against and with each other. It was during this time in the early ’90s that I adopted my approach to always “force” the perspective — to make all the dialogue in a scene match what a well-placed boom would sound like.

What sorts of techniques worked best using this early equipment?

I always made sure I was listening like an audience member and if there was ever a sentence or even a word I felt was tough to understand, I would bump up the radio mic just enough to add clarity. I knew I was committing that performance to the one and only mono mix track for post-production to use. If, for example, an actor trailed off a line as they dropped their face down, I could just bring in the radio mic ever so slightly, so the words were not lost to the audience. Lots of mixers did this.

So, when did things really start to get better for wireless and what gear did you choose?

In the early 1990s, Lectrosonics introduced UHF wireless and that was a game-changer. The improved reception and quality led me to buy a “six-pack” of Lectro receivers, plus I added several loose receivers for run-and-gun work. The Lectrosonics Six Pack consisted of six receivers in a nicely machined aluminum case that had a built-in power supply and antenna multi-coupler.

For me the choice of wireless systems was simple. First and foremost, it’s all about reception. I don’t care how good a radio transmitter/receiver pairing sound if their transmission distance and reliability are not the best. Lectrosonics always gave me the best reception. Second, they’ve sounded great. Finally, they were rugged. Transmitters can be subjected to much abuse over their lifetime and failing radio mics are not good for your career. Lectrosonics units were reliable and I used them with confidence.

The next step in my relationship with Lectro was the Venue. This single-rackspace, six-receiver module was a giant leap forward. I bought two and upped my radio count to 12, which was timely because in the early 2000s, I did three seasons of the HBO western Deadwood. This show had a huge cast, and it wasn’t unusual to have two booms and ten radio mics in use and still be live-mixing a mono track!

I added a third Venue as the UHF spectrum in Los Angeles became more saturated. I also added a Lectro Venue Field, which was a “baggable” Venue with battery power. The Venue Field made car and run-and-gun work much more efficient.

I was working on Transformers: Revenge of the Fallen and Friends with Benefits right around when Lectrosonics introduced the SM transmitter line. That led to a major investment in ten SM transmitters and ten SMQ transmitters, plus a fourth Venue system that I kept in a more mobile rig. I made sure all my transmitters were 250mW-output-capable to ensure maximum range.

What and when was the pivot point into multi-track recording? These days even most student films have a four-track Zoom at the very least.

In a word, streaming. The year 2012 changed everything. The major streaming platforms joined the cable and broadcast networks to produce original programming. With this explosion in production came incentive for manufacturers to make tools that could really save time. This included wireless transmitters and receivers, and multi-track recorders. Now, it’s common to have a transmitter on every speaking actor, with each assigned its own track. The mix track is still there for dailies. If it’s brilliant, post can run with it, but if it’s deficient in any way, the separate mic tracks can be remixed very easily.

Describe some of your gear and techniques working on these productions.

For wireless booms I preferred an SMQV transmitter with an external 48-volt power supply. I would run the SMQV at audio level 4. That is not a typo. I never had to alter the level of the transmitter. Beasts of No Nation was a film about child soldiers. We would repeatedly shoot scenes that involved automatic rifle fire, followed by whispered dialogue, followed by more gunfire. I was able to get all the dialogue without any noise, but the transmitters held up distortion-free to the gunfire bursts.

With so much of the technology having changed as you describe, why have you stuck with Lectrosonics for so long?

Over the years, I have owned many different recorders, mixing boards, favorite boom mics, and lavaliers. But the one brand I’ve never wavered on is Lectrosonics. It has never failed me in tens of thousands of hours use, all day, every day, all around the world. Whether in the blazing heat of the California deserts, the freezing cold of an all-nighter in a Chicago winter, or the jungles of Africa. Whether dropped, dunked, or abused in every conceivable way, they continued to perform at the highest level.

You described the rise of portable cameras, which brought in the era of the multi-camera shoot. How has that shift changed the approach to sound?

There’s no way to predict what shot the director and editor will ultimately use. The camera angles can bounce all over the place, but the sound needs to be one continuous thread that cuts like butter, and the only way you can achieve that is through forcing the perspective through great wireless mic work combined with great boom work. In fewer words, audiences expect everything to sound like a close-up. Nothing takes an audience out of a story faster than bad sound.

Now that you’re teaching, how do you convey that to cash-strapped students who might be inclined to spend on sound last?

The USC cinema school is very big, as is the filmmaking talent within. We have 12 professors in sound alone. It’s not unusual to have 80 to 100 productions going on simultaneously. In my upper-level undergrad and graduate production classes, I demonstrate and convince them to use Lectrosonics on their films. Once they do, they’re hooked. If you went to culinary school at Le Cordon Bleu, you wouldn’t train with a toy Easy Bake Oven.

In other words, start with gear you’ll grow into, not out of?

Exactly. USC is in one of the most challenging RF environments on Earth: downtown Los Angeles. Almost every UHF TV channel is utilized, as are whole chunks of the UHF spectrum dedicated to digital TV, emergency services, and 5G cellular. Lectrosonics has provided a lot of great tools for overcoming such challenges, such as their Wireless Designer software. Also, there is no substitute for 250mW transmitters. Plus, they hold their value. I’ve happily spent close to $150,000 on Lectrosonics equipment in my life. When I retired and sold it all, I got close to 85 percent of that back. It all sold in a week. If that doesn’t speak volumes, I don’t know what does.

Well respected within the film, broadcast, and theatre technical communities since 1971, Lectrosonics wireless microphone systems and audio processing products are used daily in mission-critical applications by audio engineers familiar with the company’s dedication to quality, customer service, and innovation. Lectrosonics received an Academy Scientific and Technical Award for its Digital Hybrid Wireless® technology and is a US manufacturer based in Rio Rancho, New Mexico. For spare parts and a full line of accessories, visit the company’s online store: Lectrosonics U.S. Online Accessory Store.