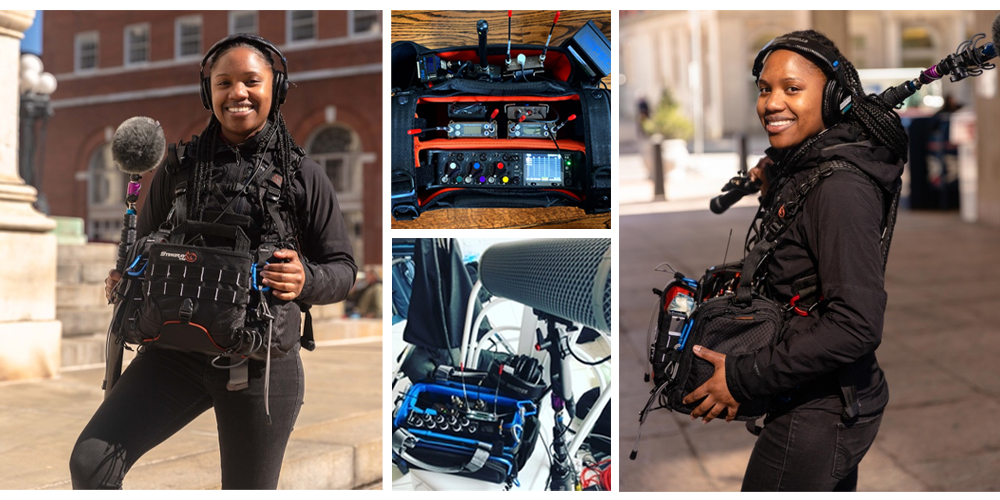 “I only want Invictus Sound Factory to produce quality sound, so I built my bag with Lectro.”

New York, New York (July 28, 2020) – Sound Mixer and CEO Antoinette Tomlinson stays focused on the future as she continues to add to her body of work and builds an even stronger vision for her company, Invictus Sound Factory. Tomlinson’s credits include Netflix docuseries The Goop Lab with Gwyneth Paltrow, nationally syndicated sports talk radio program The Dan Patrick Show, and Netflix India series Small Talk in the Big Apple. Commercial credits include company CallJoy Answer with Intelligence, and commercial Ottawa: The City of Makers in collaboration with Destination Canada and The New York Times. With each client Tomlinson makes sure her kit is Lectro-ready which includes SMWB Wideband Transmitters, SR Series Receivers, and UCR411a Digital Hybrid Wireless® Compact Receivers.

“I graduated in 2016 from Full Sail University with a Bachelor of Science in Recording Arts. My first paid job was working as a 2nd AC for the Hot 97 Summer Jam Festival at the MetLife Stadium in New Jersey. At that time I was still trying to figure out what path my career was going to take. I was fascinated by the mixer’s bag so I started asking a lot of questions. At the end of the job he basically said if you want to do it, build a kit and do it. So I did.”

Tomlinson founded Invictus Sound Factory in the same year and quickly landed her first job under her company name with The New York Times and Destination Canada.

“My sound career took off really fast and I was ready to push myself. My kit was still in development when I got the job with The New York Times and Destination Canada, but I wanted to give my best, so I knew I needed to use Lectrosonics. At the time, I borrowed two UCR411s and a Digital Hybrid Wireless® UHF Belt-Pack Transmitter from a friend. I also used 2 SMQV transmitters.”

In 2017, Tomlinson moved to New York City. Now her kit includes Lectrosonics wireless at the ready. “I only want Invictus Sound Factory to produce quality sound, so I built my bag with Lectro.”

Tomlinson works on a lot of docuseries, which brings unpredictable weather and set needs.

“Another reason that I use Lectrosonics is because they are very reliable. One time I was working on a documentary shoot, which involved recording two interviews in two separate vehicles at the same time. When the director asked if this was possible I immediately grabbed my SMWB that has the ability to record straight to a Micro SD Card, put that on the talent and left with my sound bag to record another interview in a separate vehicle.”

Tomlinson is currently working on a reality competition show in Canada and has two PBS series lined up for August.

“While things aren’t as busy as they were before COVID, I still have work coming in as we start to slowly reopen.”
When asked what vision she has for her company in the future, Tomlinson says, “I would really like to open the door to more women in the sound department, assist them with training and encourage them to pursue this career.”