Jon Mendel Records the Sound of Vermont with Lectrosonics 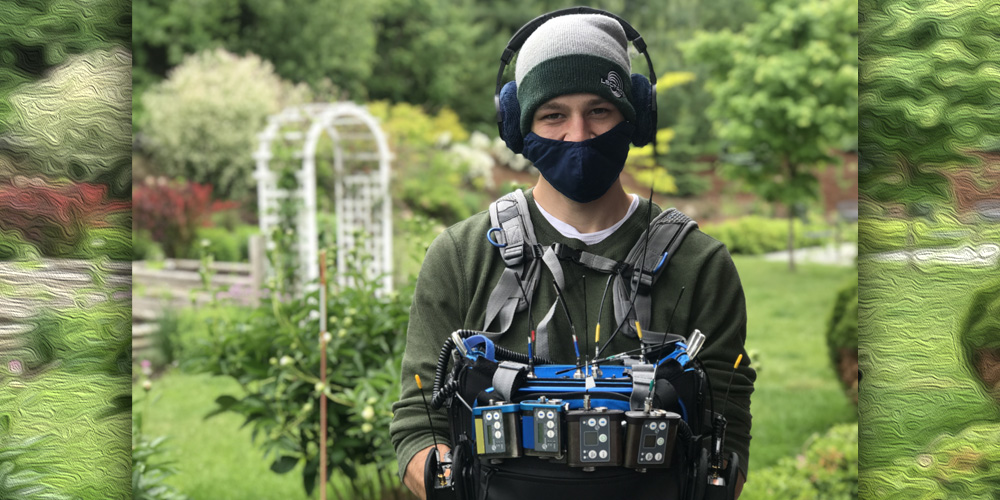 “In the best of times, you don’t want to mess around adjusting a transmitter on the talent’s body. With Covid-19, that’s now a hundred times as true because we’re doing shoots as distanced as possible. That’s why I love the dual batteries in the SMDWB and SMQV transmitters — they last forever.”

Burlington, VT (June 23, 2020) — Vermont may be known for skiing, Ben & Jerry’s ice cream, and jam-band demigods Phish, but the brave little state is also home to a tight-knit and thriving media production community. Here, Jon Mendel is one of the first sound mixers to get the call for any new project. Whether that’s for a reality TV show about infomercial star Anthony Sullivan farming legal hemp, or a web series in which kids win scholarships to prestigious athletic camps, the first thing Jon reaches for is his extensive toolkit of Lectrosonics Digital Hybrid Wireless® audio equipment. This comprises SRC and UCR411a receivers, SMQV and SMV transmitters, SMDWB wideband recording transmitters, and IFBT4 transmitters paired with IFBR1a receivers for monitoring.

“Lectrosonics has firmly supplanted any other wireless gear I started out with when I got out of college,” says Mendel. “I resolved to save money and make the jump to Lectro as soon as I could, because I knew that owning broadcast-quality equipment would make a difference in the gigs I got. I bought my first Lectrosonics piece about five years ago, a used UCR411a.”

Mendel’s client-based work demands four main things from the audio department: “Reliability, range, durability, and sound quality,” he explains. “You have to turn it on and it just has to work without a lot of fiddling. At the best of times, you don’t want to mess around adjusting a transmitter on the talent’s body. With Covid-19, that’s now a hundred times as true because we’re doing shoots as distanced as possible. That’s why I love the dual batteries in the SMDWB and SMQV transmitters — they last forever. I will use the SMV, which has a single battery, if I need a transmitter that’s physically tiny.”

Range was a key requirement on the recently wrapped Kings of Kush, a reality show about hemp farming with a celebrity presence: “Anthony Sullivan, the infomercial guy, found that CBD was the only thing that relieved the side effects of a medication his daughter needs. Long story short, he was so impressed he bought an entire farm called MontKush and we filmed a show there for more than 40 days straight. I was part of an outdoor crew that would film conversations of these hemp farmers, employees, and ‘Sully’ himself from 20, 30, sometimes 50 yards away. We got crystal-clear audio the entire time without using distributed antennas — just the little whips on the receivers themselves. Most of the time, the output setting of 100mW was enough for this, but if we really needed punch, the SMQV can go to a quarter-watt.”

The outdoor, agricultural environment presented its own challenges. “These are hemp fields, so everything was constantly dusty and dirty,” he recounts. “The big ‘oh s***’ moment, though, was right at the peak of harvest. All these farmers are scrambling to clear the fields, and the sky just opens up. I had my rain poncho on, but I was distracted and didn’t see that water was getting into my audio bag. At one point, I looked down and there’s a quarter-inch layer of water over my receivers. I waved to the producers to stop and honestly thought my career might be over. I dumped the water out, and not only were the receivers still working, but I was recording audio the entire time. As they say, don’t try this at home, kids, but that’s a real testament to the toughness of Lectrosonics!”

Lectrosonics proved to be just as tough standing up to athletes. “A really cool YouTube series I got to work on was called Woodward Bound,” he recalls. “It was done for Powdr, the ski resort company that also owns Woodward athletic camps — skating, skiing, gymnastics, all kinds of activities. We would surprise kids with a scholarship to the camp of their choice and catch the big reveal on camera. We’re at their camp in Pennsylvania filming skateboarders, whom we had miked up. One of them wipes out, hard, and goes sliding across the asphalt. The transmitter is in between his body and the ground and is taking the brunt of it, just grinding across the pavement. I thought it was toast for sure, but it just suffered minor scratches. Again, I never stopped getting audio from it.”

On another Woodward shoot, Lectrosonics’ quick infrared transmitter-receiver pairing saved the day. “For one episode in New York City — which is already a crazy RF environment — the scholarship was going to a talented young gymnast in Harlem,” says Mendel. “She was on the way to meet her coach, who was going to give her the big surprise. I had scanned for frequencies ahead of time, of course, but later we found out there was a National Guard base nearby. Military radio is notorious for eating up spectrum. Suddenly, I have nothing from her coach, and the kid is walking in the door in less than five minutes. I was able to scan for a new frequency, bring the coach in, re-pair her transmitter, and get back up and running inside of 30 seconds or so. That was crucial, because delaying anything would have ruined the surprise.

“I don’t use IFB that often,” Mendel continues, “but when I do, it’s on reality shows with multiple producers. Lectro just came out with the R1B but I still love the older R1A. This is another situation where it just needs to work, because if those producers can’t listen in on every little word and bit of drama between the talent members, they don’t care about why. Again, I always get crystal-clear audio with no problems. I’m working towards an all-Lectro rig, and the next items on my wish list are an M2 Duet digital IFB setup and the DCHT digital stereo transmitter for camera hops.

“With the novel coronavirus keeping this industry challenged, I literally have work because of Lectrosonics,” Mendel concludes. “At the end of the day, your clients aren’t audio geeks who care what brand of gear you’re using. They just want the results to sound great and the shoot to go off with no interruptions. Lectrosonics gets me as close as possible to giving them an absolute guarantee of that.”