Lectrosonics Keeps Allen At The Forefront Of His Craft

Multiple generations of wireless technology used on location and in education

Rio Rancho, NM – April 2007… Whether on location for yet another TV or film project, or plying his craft to future generations of film students at Full Sail, independent production sound mixer Thomas E. Allen Sr. C.A.S. is one very busy audio professional. Having started in this business more than 30 years back, Allen’s experience has taken him from equipment repair to post production and on to location sound, which has been his passion since 1985. Throughout a seemingly countless string of projects, Allen has consistently relied on one company to provide the wireless technology he credits with much of his success—Lectrosonics. 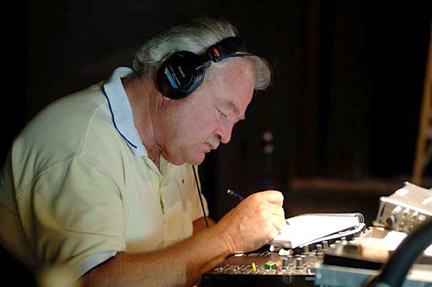 During the 30-plus years he’s been working on location, Allen has been involved in episodic television shows such as Murder, She Wrote and Columbo, along with numerous film projects, including the recently completed Sydney White; also known as Sydney White and the Seven Dorks. A Morgan Creek feature scheduled for release in late 2007 or early 2008, Sydney is a modern retelling of Snow White set against students in their freshman year of college in the fraternity/sorority Greek system. Starring Amanda Bynes and John Schneider as part of a sizable cast, Allen found himself interfacing multiple generations of Lectrosonics wireless technology to accommodate the demands of production.

Allen’s wireless arsenal includes four channels of Lectrosonics UM400 transmitters and UCR411a receivers plus another four channels of earlier generation M185 transmitters and 185 VHF receivers. For his work on Sydney, Allen reports placing every piece into service. “Because we had as many as ten actors speaking on the set,” notes Allen, “this equipment saved me a tremendous amount of time. There were simply too many people to attempt miking everything with a fish pole (boom setup). Even though I was using my early generation 185 series gear side by side with my 400 series equipment, I was able to seamlessly blend all the Lectrosonics units into the mix with my wired mics. I was running ten audio channels simultaneously and not once did I encounter any RF issues. Without my Lectrosonics equipment, this would have been an impossible task.”

While his 185 series gear may be showing its age, not once has Allen considered retiring the equipment. “These have been exceptionally dependable units and I still use them quite frequently,” Allen said enthusiastically. “They’ve seen a lot of service—and some of it quite out of the ordinary. I remember one project where I actually worked with wardrobe to conceal a 185 transmitter in an actress’ hair because there was no other way to hide the transmitter. Believe me… these units have seen it all!”

For Allen and others like him who spend their time “in the trenches”, reliability is of critical concern, and on this note, Lectrosonics gets high marks. “Their products run forever,” notes Allen. “I’ve had virtually no problems with any Lectrosonics equipment—either my own or the school’s. For Sydney, which came up at the last minute, I knew I needed a lot of channels, so I sent my 185s in for checkups, since I hadn’t used them in a while. I wanted them looked over as a precautionary measure because you never know what you’ll encounter on location. The company serviced my equipment and turned them around super fast. I was really appreciative of their customer support—so much so, that I called the company back just to thank them.”

At Full Sail, which is recognized nationally as one of the leading schools for TV/film/music production, computer animation, and other production disciplines, Allen teaches using the school’s three channels of Lectrosonics SM Series transmitters and Venue receiver equipment. “This is a wonderful system,” says Allen, “and I plan on adding a similar setup to my own equipment arsenal in the near future. It’s amazing how compact the Venue system is—even with a full six channels.”

Allen has grown particularly fond of the Lectrosonics VR Field Receiver System. “I’ve been very impressed with the VR Field version of the Venue system,” continued Allen, “as the battery operation makes this a self contained unit that doesn’t depend upon 110 volts AC for operation. When this is linked with the SM transmitters, the system is unbelievable in terms of its compactness, its ability to conceal transmitters, its sound quality, and the ability to mix it with other mics and make it all sound like one. This will be my next major Lectrosonics purchase—no doubt about it!”

Before rushing off for yet another hectic day, Allen summed up his Lectrosonics experience. “With its durability and unsurpassed sound quality, I don’t believe there’s another system on the market that comes even close to Lectrosonics in terms of features and performance,” said Allen. “I’ve always maintained that if I’m going to make a major capital investment in equipment, Lectrosonics represents a wise, secure way to go that will pay me back one hundred fold.”