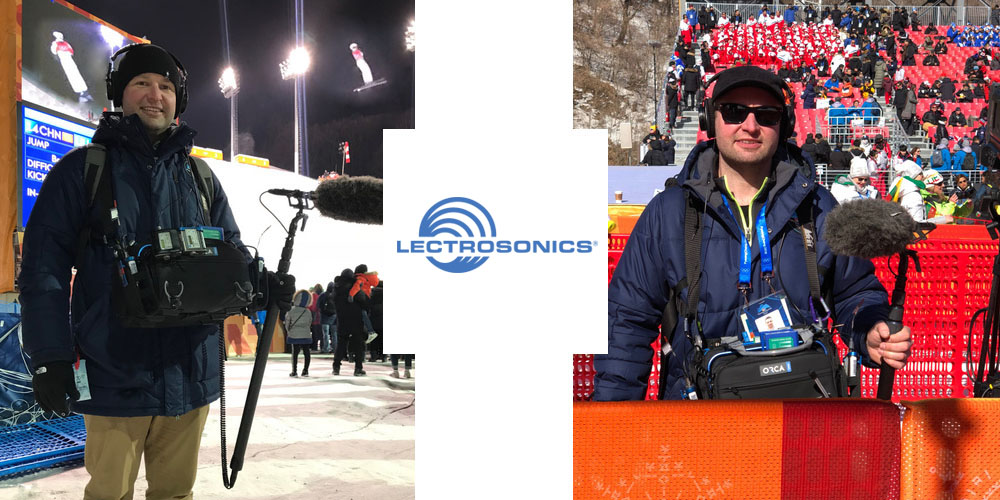 “The versatility and wide range of Lectrosonics Digital Hybrid Wireless gives me a lot of peace of mind when I’m mixing in a field environment like I had in South Korea.”

Rio Rancho, NM (March 6, 2018) — Freelance field audio mixer Callahan Moots, based in New Mexico, has been working with a number of major U.S. television networks domestically and internationally for more than a decade. According to Moots, the wide frequency tuning range of Lectrosonics Digital Hybrid Wireless equipment, including LT, SMQV transmitters and SRc receivers has been invaluable as he has travelled nationwide and internationally as part of an ENG team to cover major breaking news and events including, most recently, the Winter Games in South Korea.

Moots carries a selection of Lectrosonics wideband equipment in his bag, including four LT Digital Hybrid Wireless belt-pack transmitters paired with Sanken COS-11D lavalier microphones. “The new transmitters and receivers from Lectrosonics have a wide range of frequencies that you can transmit on,” says Moots. “That is especially helpful in a place like Pyeongchang, where we were very limited as far as which frequencies we could use.”

He continues, “The wideband range of my Digital Hybrid Wireless transmitters made it easy for me to select a couple of the frequencies that they allowed me to use. I was easily able to program those into my equipment. The entirety of the time I was there, I didn’t have any issues with the gear. It was bulletproof. I slept very well at night knowing that I had that equipment.”

In South Korea, Moots was tasked with putting wireless body microphones on some of the athletes, correspondents and anchors for a variety of news programming. “My job was to conduct sound recording and mixing for interviews, cover some live events, such as downhill skiing, and talk to athletes there in the mixed zone,” he says.

Moots typically carries a Sound Devices 633 mixer/recorder in his bag together with a pair of Lectrosonics SMQV transmitters that enable the wireless hop to the camera, which is outfitted with an SRc dual-channel receiver. “I’m not only transmitting wirelessly from whomever I’m miking up — that would be wireless transmitted to my mixer — but I also use a wireless camera hop, so I’m transmitting from my mixer to the camera,” says Moots. “Especially in the field, wireless makes the most sense, and I’ve taken full advantage of the Digital Hybrid Wireless that Lectrosonics has offered for many years.”

Moots has worked as a field audio mixer for more than a decade with national news outlets such as ABC, CBS and NBC, mixing both recorded and live audio for many nationally accredited television shows including 48 Hours (CBS), 20/20 (ABC) and NBC’s Dateline, Today and Nightly News. During that time, he has worked with numerous DPs including his father, Carey P. Moots, an eight-time Emmy Award recipient. The Moots have teamed-up on a variety of important news stories, including the shooting of Arizona Congresswoman Gabrielle Giffords in Tucson in 2011.

Moots inherited his appreciation of the audio quality and robust performance of Lectrosonics gear from his father, who has been a fan of the company’s wireless equipment ever since it was founded over four decades ago. It also doesn’t hurt that he is now a resident of Rio Rancho, NM, where Lectrosonics has its headquarters. “I’d be a fool not to drive over there and bug them and hang out with Karl Winkler, their vice president of sales,” he laughs.