For the Hearty Crew of Friends with Fins, Lectrosonics is the Only Fish in the Sea of Wireless 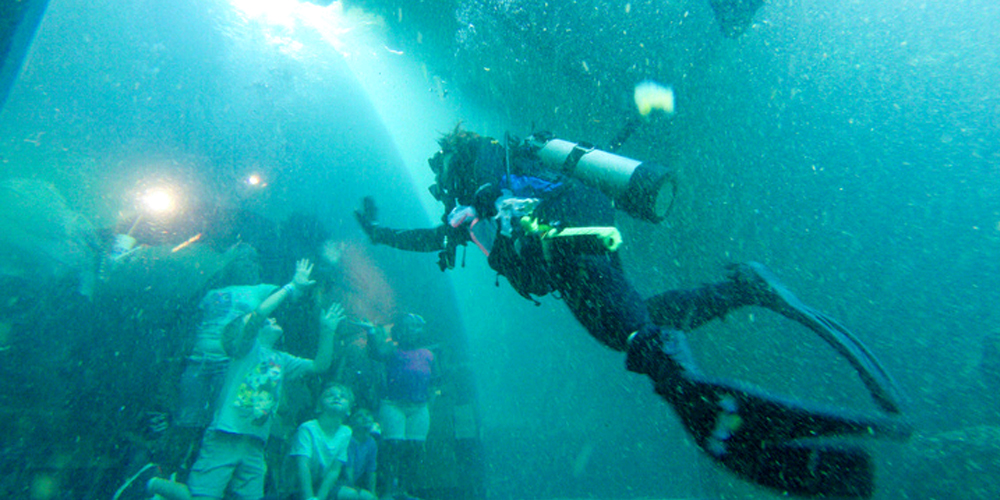 Los Angeles, CA (October 24, 2017) — Friends with Fins is the brainchild of author, speaker and marine life expert Jaclyn Friedlander. Beginning as an animated short film screened in schools and aquariums, it has evolved into a YouTube video series spanning the world’s waters to educate children about ocean ecosystems and the need to protect their inhabitants. With catchy subjects such as, “SCUBA Diving with Sharks” and “Do Fish Get Drunk?”, its concise format and exuberant host engage its target audience of eight- to 11-year-olds while being informative enough for their parents to enjoy watching alongside them. As the team plans a major expedition and a play for television, they‘ve found that Lectrosonics Digital Hybrid Wireless — specifically a WM water-resistant belt-pack transmitter and UCR411a receiver—have been vital to their dive into production of the series.

“For all of the YouTube videos, we use Lectrosonics to do interviews and it has made all the difference in the world in terms of production quality,” says Friedlander. “Having great audio has definitely upped our game! We also shoot a lot of underwater video, and since I already have my lav mic on, we might use the rig to record the voice-over for that footage right afterwards. I've also used it to get audio during school visits.”

Friedlander, who has always had a passion for the ocean explains her inspiration for the show and how she found Lectrosonics.

“I’ve been fascinated with marine life ever since I was a kid,” she explains. “All through school I was performing in the entertainment industry and then I started volunteering at an aquarium. That’s where I was initially inspired to create content for some of the younger kids. A lot of the time, the older kids and adults would get the most out of it, so I figured if I could reach the younger ones; we are working to build curriculum module material to pair with our books and videos for schools.

“Because of my entertainment background —working as an actor — I had encountered Lectrosonics before,” she continues. “Someone was always putting a ‘Lectro’ on me. So they’d been on my radar for sure.”

At Friedlander’s right hand is Emmy Award-winning cinematographer Tim Riese, who also happens to be a rescue-certified SCUBA diver. He weighs in on the ruggedness and flexibility of the Lectrosonics rig:

“I'm the director of photography on Friends with Fins, but on many occasions we only have a crew of one to two people, so we all wear many hats,” he explains. “Having high quality equipment that's easy to use is crucial to making the day go smoothly. Our shoots take place in, around, and even under water all over the U.S. and abroad. The water-resistant Lectrosonics transmitter we use gives me confidence that we won't have any issues or failures if an animal splashes or needs to be followed into the shallows. And as we shoot in various locations around the world, the receiver's multi-channel capability and ease of use, especially with the built-in RF scanner [to find open radio frequencies], is invaluable.”

Where do the Friends with Fins team plan to take their Lectrosonics gear next? To Florida, as they take their show to the next level.

“This fall we will be in Florida working with the Save Crystal River project to showcase the eel grass restoration project they are working on as well as the local manatee population. We also plan to shoot a pilot,” says Friedlander. “We shot a test pilot and put it through three focus groups, who led us to decide that we should shoot a whole pilot, and then we’ll continue pitching to some of the regional broadcast interests we’ve spoken with in the U.S. The idea is that Friends with Fins could fulfill the FCC’s requirements for educational programming.”

“One of the things that attracted me to this project was the Friends with Fins mission: to provide educational materials to school-age children with a strong focus on STEM and ocean conservation,” says Riese. “The project is moving in a great direction and we now have quality audio capture. Lectrosonics has definitely improved upon the dreaded camera mic I was using previously. I'm looking forward to our upcoming pilot shoot because we will actually have a dedicated audio guy with us, as well as our Lectrosonics wireless system.”

“Lectrosonics is the only wireless we’ll use on the show; we’ve tried other things before, but with all the wireless audio capabilities they give us, there’s just no comparison,” adds Friedlander.

To learn more about Friends with Fins, visit: www.friendswithfins.org

To check out the 80+ marine video resources, visit: www.youtube.com/jaclynfriedlander