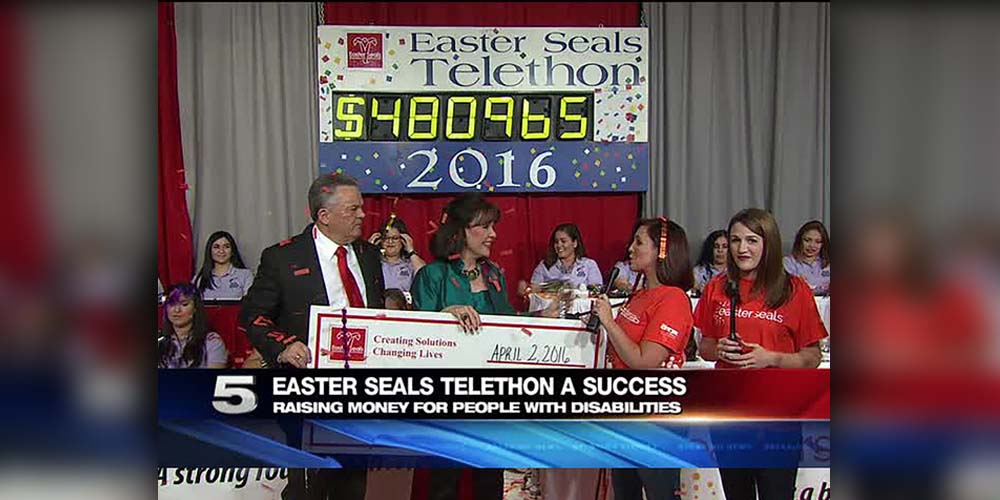 “I like the flexibility, especially in the design of the Venue, which allows the VRT receiver modules to be swapped out if required. It has worked wonders. We tested the range and it went all the way to the front of our lobby.”

Weslaco, TX (May 18, 2016) — Lone Star EMMY® award-winning KRGV Channel 5 News recently employed Lectrosonics Digital Hybrid Wireless® equipment in Studio B for its 39th annual Easter Seals Rio Grande Valley telethon, including a Venue receiver, HM UHF plug-on transmitters, LMa belt pack transmitters and M152 lavalier microphones. The ABC affiliate, which has been the highest-rated television news organization in the Rio Grande Valley for decades, is currently preparing to install another Venue receiver, paired with LMb belt pack transmitters, in Studio A, where it will be used for the daily newscasts.

“The Venue system in Studio B works really well for us,” says Israel Alfaro, an award-winning photojournalist who has been with KRGV for over 20 years and is now Operations Manager for the South Texas station. “We’ve had no problems, no glitches, no hiccups with it,” he says.

For the recent telethon, which raised $480,965 for Easter Seals Rio Grande Valley, Alfaro and the engineering team at KRGV deployed four HM plug-on transmitters on Shure handheld ENG microphones as well as four LMa belt packs with M152 omnidirectional lav mics with the Venue. “I love the Lectro M152,” says Alfaro. “Once I tried them, many years ago, I was hooked. Now they’re the only ones I use.”

He continues, “We have two Lectrosonics IFB systems, with six receivers and a transmitter that are used every day in the studio. We also have Lectrosonics SRb two-channel dockable receivers on our Panasonic AJ-HPX2700 VariCams. We’ve had those for a little over five years, and they’re a workhorse. I also have a couple of SMQV receivers that were issued to the photographers. I’ve used that one, and I love it. I try to stick to Lectrosonics.”

In fact, Alfaro is a longtime Lectrosonics user, he reports. “I started using Lectrosonics in the early ‘90s, with the CR187 [VHF compact receiver]. We were always really happy with them, so we stuck with Lectrosonics, even in our studio, and we have been loyal users for a long, long time.”

When it came time to replace the CR187 systems, Alfaro continues, he did his due diligence and discovered the Venue receiver system. “I liked what I saw. I like the flexibility, especially in the design of the Venue, which allows the VRT receiver modules to be swapped out if required,” Alfaro adds. “We got it, and it has worked wonders. We tested the range and it went all the way to the front of our lobby.” As for the CR187s, he says, “We still have them. They’ve been really good; we’ve used them all over the country.”

Channel 5 News has expanded its news programming several times over the past several years. The station’s newsroom has been recognized with numerous awards over the years, particularly for investigative reporting, newscasts, and special reports.

Until recently, the station’s ENG crews were using a different brand of wireless equipment. “But since Lectro came out with the smaller L Series I started budgeting for those,” says Alfaro. “The LR miniature receiver—Iet me tell you, it is awesome. I put that puppy together with the new Panasonic AG-DVX200 4k camera. I specifically ordered that for a special project.”

The project was a follow-up to the story of a cold case murder that took place in McAllen, TX, in 1960 and the February 2016 arrest of the alleged perpetrator, John Feit, a former Catholic priest. Feit had previously been tracked down to Phoenix, Arizona by a KRGV reporter in 2003. “I thought, I’m going to an uncharted place where I don’t know the frequency,” says Alfaro, who has been recognized with numerous awards from the Texas Associated Press Broadcasters and whose photography has contributed to several regional Edward R. Murrow Awards for KRGV-TV. “So I did my homework and saw that the L Series covers three blocks [the term Lectrosonics uses for segments of the operational frequency range]. That wireless system came in very handy for the live shots in Phoenix. And Channel 5 was the only TV station in the nation to break the news.”