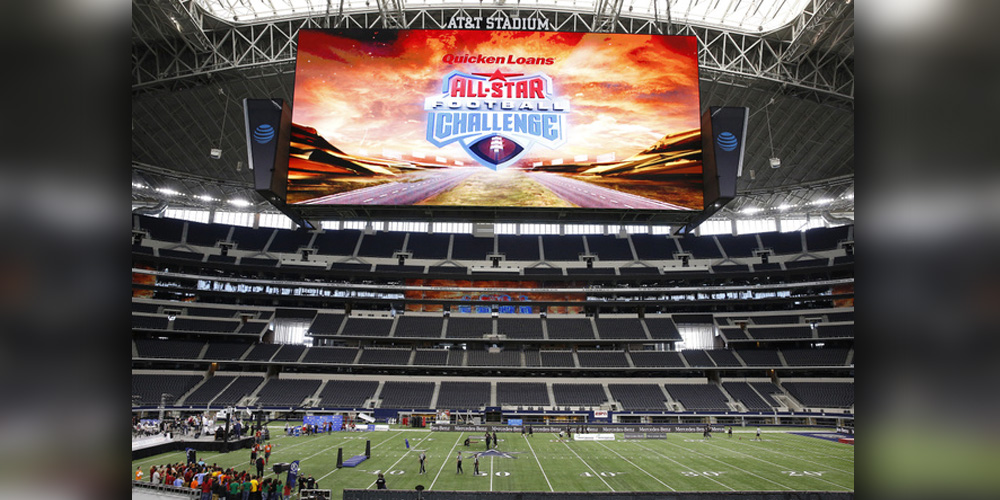 Houston, TX (April 5, 2016) — The Quicken Loans All-Star Football Challenge, broadcast by ESPN2, showcases 15 of the best college football players in a competition of strength, agility and accuracy just ahead of the NFL Draft and Super Bowl 50 weekend. Alumni of the annual skills competition, which began in 1999, have included three Heisman Trophy winners, 60 first-round NFL draft picks and 29 Pro Bowlers. For the recent broadcast production of the 2016 event, held at AT&T Stadium in Dallas this past month, Jason Martin Audio supplied a full arsenal of Lectrosonics Digital Hybrid Wireless® equipment, including Venue and Venue 2 receivers, LT and SMQV beltpack transmitters, HH and HHa handheld transmitters and the new IFB-VHF wireless system.

“We set up 20-plus channels of Venue and Venue 2 receivers with a combination of VRT modules in blocks 19, 20, 24 and 26,” says Martin, who reports that RF A2 Adam Sallee from Houston operated the Lectrosonics gear at the event. “The two Venue 2 receivers had multiple tracking modules in block A1, which we used for the sideline reporter, and we set up eight of the new LT transmitters, also in A1, eventually using probably six of them. We were prepared to mic as many as 20 players but there were only 15 competitors.” The Lectrosonics beltpack transmitters were paired with Sony and Countryman lavalier microphones, he adds.

The Venue 2 receivers were a new acquisition for Jason Martin Audio along with the LT beltpacks and HHa handheld transmitters. “We wanted to get the Venue 2 in there and play around with the new wideband tuning, because of the looming FCC auction,” he explains. “We want to be able to offer our customers a robust tuning range that will work in many, many different locales, as well.”

Martin further explains, “The new Venue 2’s 75 MHz tuning range is a great leap over the 25 MHz range available in the original Venue blocks. The traditional blocks are still very good for single wireless microphones for sideline reporters and IFBs, because you’re going to be able to find one open frequency in almost any city. And when you need to use multiple frequencies, the new Venue 2s are great.”

He also tried out a new Lectrosonics IFB-VHF system at this year’s All-Star Football Challenge. “I was nervous about the output power being 50 mW as opposed to the 250 mW available in the UHF unit, but because it’s in the VHF range, it worked flawlessly. I had no problems using the 18-inch whip antenna; it was great.”

Because he is the owner-operator of the company, says Martin, “I am able to keep the latest and greatest Lectrosonics equipment in stock; when you rent from me it’s always the latest gear. That’s a very big deal for my clients, because having handheld microphones with talkback and the new LT beltpacks greatly reduces the ambient noise inside the truck for the production crews.”

Martin, who regularly mixes the home game broadcasts for the NBA’s Houston Rockets and the MLB’s Houston Astros, comments, “I’ve been a broadcast A1 for over 20 years and I’ve also rented equipment for over 20 years, and Lectrosonics has literally made my business. The gear is strong, robust and reliable.”