System Operates in the Less-Trafficked VHF Broadcast Band, Offering 239 Frequencies from 174 to 216 MHz 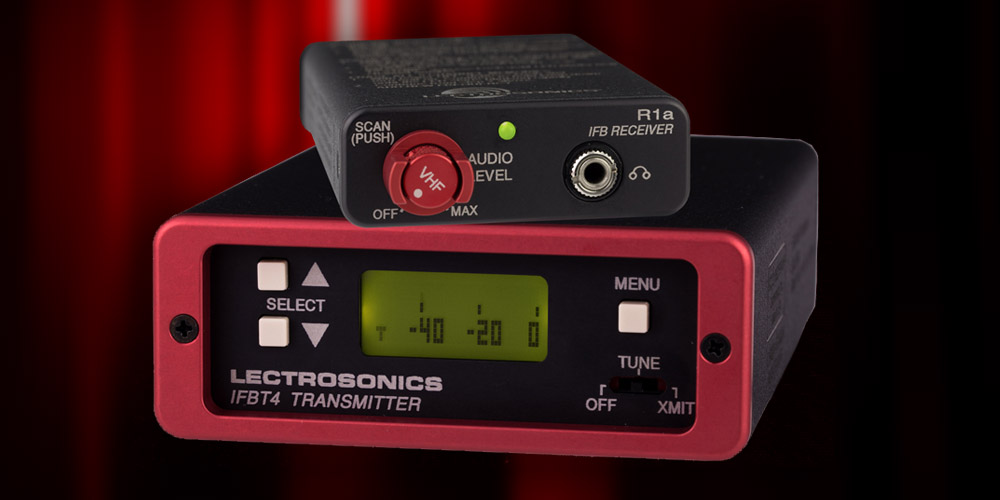 The Lectrosonics IFBT4-VHF frequency agile IFB transmitter is designed for use in broadcast, motion picture, theater, and stage applications where extended operating range and high quality audio are essential. The transmitter can be used as a stand-alone device or patched directly into popular intercom systems. The IFBR1a-VHF receiver is designed for use for talent cueing and crew communications in broadcast and motion picture productions, as well as for use by directors and management to monitor audio during a production. The receiver offers simplicity and flexibility in its operation, in a package that is intuitive for both experienced professionals and new users to operate.

The IFBT4-VHF transmitter features 50 mW power output for superior long range use and is a perfect companion to the rugged, all-metal IFBR1a-VHF receiver. A pilot tone signal controls the audio squelch on the receiver to eliminate noise when the IFBT4-VHF is turned off and prevents the receiver from locking onto false signals. The receiver default frequency is set by two rotary switches, and up to five additional frequencies can be programmed into the memory. The transmitter incorporates a multi-use XLR input jack and DIP switches with settings for dynamic mic, line level, Clear Com® and RTS sources. In IFB mode, the system is optimized for vocal clarity. The IFBT4-VHF transmitter can also operate in Digital Hybrid Wireless® mode for additional compatibility with future Lectrosonics products.

"By adding the IFB system on the VHF frequencies, it allows users and system designers to move these out of the critical UHF band, which should improve the ability to coordinate larger systems even in a crowded RF environment,” says Karl Winkler, Vice President of Sales/Service for Lectrosonics. "And one of our key users gave us the idea for the red bezel and volume knob to differentiate the VHF version from our UHF units that have the blue knobs. Red for lower frequencies, blue for higher frequencies, makes sense to me!"