Jaguar Revs Up the Sound for its Ad Campaign with Lectrosonics 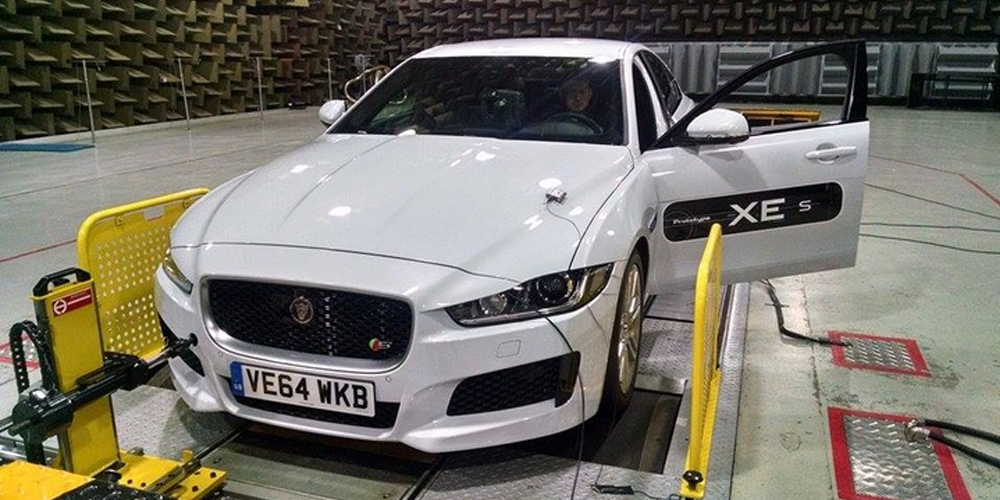 Jaguar Revs Up the Sound for its Ad Campaign with Lectrosonics

“I was Impressed that I Could Call Lectrosonics and Speak Directly to the President of the Company, Just Like That. That Kind of Customer Service Knocked my Socks Off.”

Birmingham, U.K., (March 10, 2015) — During more than a decade as a U.K.-based sound recordist Bal Rayat has frequently labored under punishing conditions, from desert to dense forest, but even those extremes could not have prepared him for his latest project, capturing the sounds of a Jaguar. Happily, the beast that Bal faced was a prototype Jaguar XE S sports sedan, which he recorded at the company’s assembly plant in England’s West Midlands using Lectrosonics Digital Hybrid Wireless® Technology.

“It sounded amazing, absolutely amazing,” reports Bal, who was hired by the advertising agency. “The client is very, very happy. They were nervous, because they’d never met me before and Jaguar is a big client for them, but as soon as they saw all my gear laid out they knew they were in good hands.”

The agency had completed the visuals for the campaign, he continues, but needed authentic sounds to bring it to life. “They called me up and said, ‘We need you to record the different sounds that come off the car—sitting idle, going full pelt, doing 30, 50, 70 miles per hour.’” Bal assembled his kit, including four Lectrosonics SMQV beltpack transmitters and a pair of SR Series dual-channel slot-mount receivers, and headed over to the Jaguar Range Rover plant in Solihull, just outside Birmingham, England’s second-largest city. Over recent years the manufacturer has invested £1.5 billion in the plant, which will reportedly be capable of producing an XE car body every 78 seconds.

The four Lectrosonics wireless channels were supplemented by wired AKG, Audio-Technica, Beyerdynamic, Sennheiser and Schoeps microphones, offering alternative coverage as well as backup in case of failures. All 10 channels were recorded into a Sound Devices 664/CL6 system.

“I was on my own and had six hours to get it all rigged and recorded,” says Bal, who recorded over four hours of engine, exhaust and tire sounds. “I only had two failures. One microphone got a little too close to the exhaust and at the end of the day the pop shield had a big hole in it.” The battery was in the rear of the car, where Bal had an SMQ transmitter located, and during one take the lav mic ended up dangling unnoticed in front of the other exhaust. “I was lucky—it just burned through the rubber shielding, but the microphone still worked. Had it stayed there another minute it would have been toast.”

Bal has more than 10 years of experience working on productions for the BBC, Endemol, Fox, Optomen and others, including the award-winning The Great British Bake Off and Countryfile, two of the most-watched shows on U.K. television. He has been using Lectrosonics equipment for the past eight years. “There are three reasons: reliability, sound quality and customer support. I’ve never seen such customer support,” he says.

When Bal initially purchased Lectrosonics transmitters, the first radio system he had ever owned, he had some issues getting them to work as expected. He recalls. “I phoned Lectrosonics and asked to talk to Larry Fisher, and they put me through. I was impressed that I could speak to the president of the company just like that. He talked me through it and said, ‘If you have any problems we will get UPS to pick up your units from your house, bring them back to the States, fix them and we’ll get them back to you within five days at no cost to you.’ That kind of customer service knocked my socks off.”

Next up for Bal is the latest season of Great British Menu, a reality show in which competing chefs prepare a multi-course banquet for hundreds of guests. “It’s a big show,” he says. “There are three different sound guys—and we’re all using Lectrosonics.”