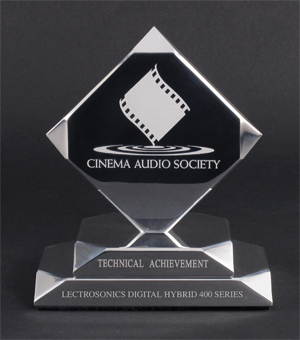 The innovative Digital Hybrid Wireless technology developed by Lectrosonics was recognized by the Cinema Audio Society for its positive impact on the film production community.

A committee was formed of C.A.S. board members John Coffey, Robert Gravenor, and James Coburn IV to establish criteria and guidelines and finally to research and submit the entries for the Technical Achievement Award. Coffey announced “ This award is long overdue because the manufacturers work together with us to make our professional efforts better all the time.”

Manufacturers were encouraged to nominate products that have been released within the previous two years and have had a positive impact on the film production community. Lectrosonics submitted their Digital Hybrid Wireless™ 400 series, including the well-known UM400 belt pack transmitter, UCR411a camera mount receiver and MM400a water-resistant miniature transmitter.

According to Gordon Moore, vice president of sales at Lectrosonics – “This award honors not only the products but the film community as a whole. As they have striven for higher production quality, CAS members have pushed us to increase the performance of our wireless systems through their ideas, input and support.”