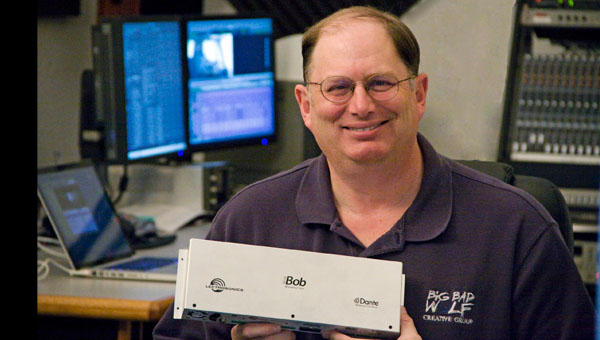 Arlington, TX – June 2013… As a global set of conferences operating under the slogan ‘ideas worth spreading,’ TED (Technology, Entertainment and Design) conferences focus on the convergence of the three fields that comprise its name. The TEDx program is designed to give communities, organizations, and individuals the opportunity to stimulate dialogue through TED-like experiences at the local level. TEDx events are fully planned and coordinated independently, on a community-by-community basis. Recently, the TEDxUTA event was sponsored by The University of Texas at Arlington and, to help ensure consistent audio quality for this real-time streamed over the Internet event without a maze of cables, a pair of DNTBOB 88 Dante breakout boxes from Rio Rancho, NM-based Lectrosonics were placed into service.

Fort Worth, TX-based Big Bad Wolf Creative Group, a media technical consulting and creative communications design firm, was contracted to provide audiovisual services for the TEDxUTA conference. Chuck Johnson, the company’s President, discussed the nature of the project and his decision to deploy the Lectrosonics DNTBOB 88 breakout boxes.

“The TEDxUTA conference this past April 22nd featured fifteen speakers with topics ranging from music to magic and was also the first TEDx event organized at the University of Texas at Arlington,” Johnson explained. “The conference room had four microphones feeding into the house sound system. Since the house audio engineer was mixing for the room, we needed to control the levels independently for the webcast. Adding to the challenge of the project was the fact that our production team had three hours to set-up and test the two-camera, live streaming setup.”

“We split the microphone feed using an active splitter/line-level driver and fed one leg to the house and took the other leg for our feed,” Johnson continued. “That’s where the Lectrosonics DNTBOB 88’s came in. Instead of running four 75-foot runs of microphone cable down the center of the room or running a thick snake, we simply connected one DNTBOB 88 to the house Ethernet connection at the rear of the stage and plugged the second DNTBOB 88 to another Ethernet connection at our audio mixer location in the back of the room.  Using the Dante controller software, the two BOB 88’s found one another and we configured the I/O matrix in about 5-minutes. This was a much cleaner setup that was more than capable of managing the multiple audio lines that, otherwise, would have run across the floor.”

When queried about those aspects of the Lectrosonics DNTBOB 88 that made these two units ideal for their application, Johnson offered the following comments. “Without a doubt, the speed of deployment and ease of configuration made these products a terrific choice for this project,” Johnson said. “Equally important, the audio quality sounded great! The fact that these units enable one to take advantage of a building’s existing Ethernet infrastructure, as opposed to running long, thick cables, is a huge benefit. Further, this approach carries the additional advantage of streamlining setup time.”

Johnson reports this was his first experience using Dante as a media networking solution to transport professional quality audio. “During the recent NAB (National Association of Broadcasters) show,” he said, “I discussed the challenge of this project with the Lectrosonics team and, immediately, they offered this solution. In no time at all, I was in possession of the DNTBOB 88’s and was confident I had the right tool for the job.”

Reflecting on his experience at the recent TEDxUTA conference, Johnson summarized his experience using the Lectrosonics DNTBOB 88 breakout boxes, “I was very impressed. Thanks to the two BOB 88’s, the setup required minimal preparation time, the configuration was very easy, and I experienced great sonic response. Simply put, it just works!”

To learn more about the services of Big Bad Wolf Creative Group, visit the company online at www.bbwcg.com.