"Ground Control: An Opera In Space" looks to Lectrosonics For Wireless 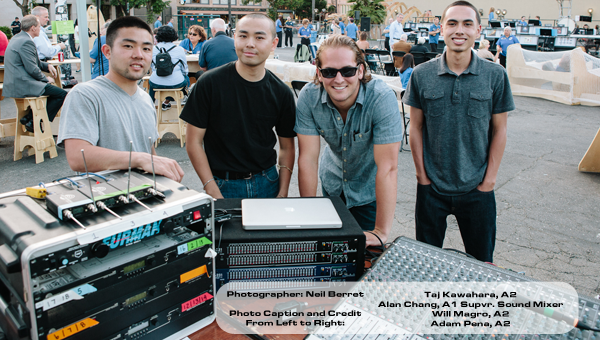 “Most of the transmitters were worn by the choir members as well as several key musicians and all were outfitted with Sanken COS-11D ultra-miniature omnidirectional lavaliere microphones,” Chang reports. “The handheld and plug-on transmitters were used for the Q&A talk series that included several of NASA Ames’ finest engineers and scientists. One of the most important pieces of wireless equipment we used was the UH400TM because of the convenience of deploying it out in the audience and staging areas for speaker and room responses.  The ease of moving a wireless transmitter provided us tremendous freedom and time—without having to stretch stacks of microphone cables around the venue.”

Chang was equally enthusiastic about the Lectrosonics Venue receivers systems and their ability to pack as many as six channels into a 1 RU rackmountable form factor. “We needed to keep the entire package as neat and tidy as possible,” he explained, “so the ability to have six channels in a single rackspace was a huge benefit in addition to the low-profile RF Diversity Fin Antenna from RF Venue.  Completing our wireless setup was a Lectrosonics T4 IFB transmitter and four R1a IFB receivers that we used for the camera links.”

When discussing those attributes of the Lectrosonics wireless equipment that were most important for this project, Chang was quick to point to several features. “Sound quality comes first when deciding on what wireless equipment to use, and among all major wireless companies, Lectrosonics has a big advantage. Their Digital Hybrid Wireless™ technology sounds far more natural than any wireless systems using compandors. Equally important is the equipment’s ease of use. We had the gear set up on several different frequency blocks and configuring everything is a very straight forward process—so that in itself is a big time saver. And the fact that the gear is incredibly reliable and that transmitters like the SMQV are so incredibly small are the icing on the cake.”

Reflecting on the success of both the project and his use of the Lectrosonics wireless equipment, Chang offered these parting thoughts, “With twenty-one choir members dressed and acting as mission control staffers plus several key musicians all miked up—and let’s not forget the Q&A exchange with the audience—there was a lot to keep track of. Now figure in the fact that we sent IFB’s and camera hops to all camera operators during the performance. This was a big wireless setup and everything worked out really well for us. As Neil Armstrong would have said in 1969, ‘One small step for man, one giant leap for Lectrosonics.’ We couldn’t be happier with the outcome!”

To learn more about Ground Control: An Opera in Space, visit http://groundcontrol-opera.com/.