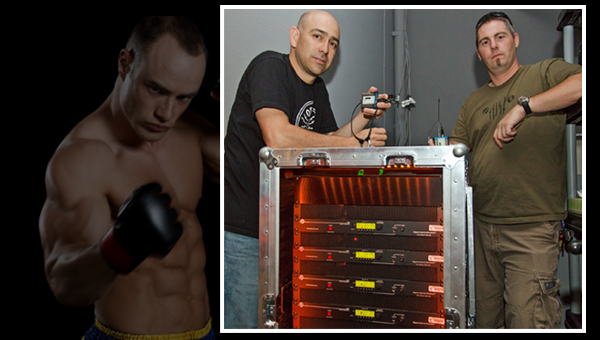 Las Vegas, NV – August 2012… Today’s reality TV shows focus on everything from interior and clothing design to marksmanship and even kitchen warfare. None of them, however, show brute athleticism quite like FX Network’s The Ultimate Fighter. The show features up and coming MMA (mixed martial arts) fighters in Las Vegas and follows them as they train and compete against each other for a contract with the UFC (Ultimate Fighting Championship). Capturing audio for the show is anything but routine. With demanding production schedules and being among one of the most RF saturated cities in the country, the show’s audio relies heavily upon a sizeable arsenal of wireless microphone technology from Rio Rancho, NM-based Lectrosonics.

Fernando Delgado, owner and chief engineer of Las Vegas-based Stickman Sound Inc, has served as The Ultimate Fighter’s sound supervisor for the last five of fifteen seasons.  He is an accomplished location sound professional who started his career A2’ing with HBO® Boxing and, in 2005, received a Sports Emmy® Award for outstanding live event audio. Delgado routinely faces a variety of daunting production challenges. This is why he relies on Lectrosonics equipment—all of which utilizes the company’s highly acclaimed Digital Hybrid Wireless® technology.

“Our setup includes twenty-four SMQV variable power super-miniature transmitters accompanied by an RM remote, two HM plug-on transmitters, and three T4 compact IFB transmitters,” Delgado reports. “On the receiving side, we use forty-eight VRT receiver modules housed in eight fully stocked Lectrosonics VRM Venue series receiver mainframes. We have four Venue receiver systems in use at both of the show’s primary venues: the ‘house’ where the competitors reside and the gym where the fighters train and compete.”

In addition to these systems, Delgado reports there’s quite a bit more Lectrosonics gear. “We also have twenty-eight Lectrosonics UCR411a compact receivers that are part of seven ENG mixing bags used on the show. Further, we use a combination of Lectrosonics SNA600 adjustable dipole and ALP600 log periodic dipole array antennas.

“I’ve been working with Lectrosonics wireless gear for more than ten years,” Delgado says. “In addition to great sound quality, I never cease to be impressed with the rugged build quality and the reliability this equipment delivers. These guys are fighters—not actors—and they tend to be pretty rough on the gear. I’ve never had a piece of Lectrosonics equipment go down on me because of physical damage. Simply put, you can beat the hell out of it!”

When queried about the single most important Lectrosonics attribute that really makes a difference in the production of this show, Delgado immediately singled out the SMQV’s battery performance. “The SMQV’s variable transmission output is huge,” Delgado said. “We use as the transmitter’s low output as much as possible for all the close range work and, of course, we have the option to increase the unit’s transmission output if we need it. Even at 100mw I get twelve hours from the SMQV using two lithium batteries. On this type of show, that’s priceless.”

“We frequently have twenty-two hour shooting days,” he continued. “We can shoot for twelve hours without a battery change and this capability saves tremendous time, energy, and manpower during the shoot day. We typically insert batteries at 6 AM to start and replace them at 6 PM. The fact that we’re able to get so much time from the batteries goes a long way toward minimizing production down time.”

Delgado is equally enthusiastic about Lectrosonics’ customer and technical support services, “They’re a great company to work with. Whenever I have questions, I get right through to people who understand what I’m looking to accomplish and if a piece requires servicing, the company’s response time is very quick.”

Before resuming prep for the upcoming season 16 of The Ultimate Fighter, Delgado offered these parting thoughts. “With great sound, reliable performance, and exceptional battery life, the Lectrosonics equipment enables us to focus on the creative aspects of capturing sound for the show as opposed to worrying about the mechanics of making it happen. Lectrosonics builds terrific, rock solid gear that never lets me down.”