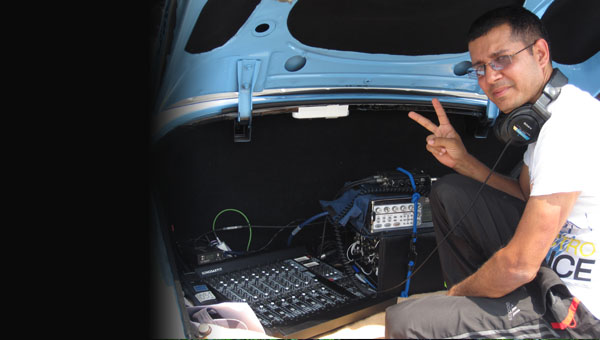 Mumbai, India – April 2012… As the world's largest producer of films, India is well known for delivering a varied palette of stories and expatriates in countries such as the United Kingdom and the United States continue to give rise to international audiences for Indian films of various languages. While synchronized sound is commonly employed during the filming process, much of the dialog has traditionally been replaced during ADR (automated dialog replacement) sessions in order to achieve the desired sound quality. Though such practices remain common throughout the Indian film production process, this is not the case for Production Mixer and Sound Designer Baylon Fonseca—thanks to the superior sound quality of Lectrosonics wireless technology.

Baylon Fonseca has achieved prominence among the Indian film community for his ability to produce great sound. His expertise has resulted in numerous awards, among them: the National Award for Best Production Mix, 2012 for his work on Zindagi Na Milegi Dobara and the National Award for Best Sound Design and Best Sound Mixing, 2012 for his work on Game. Both films were produced by Excel Entertainment Pvt. Ltd. of Mumbai and were released to worldwide theatrical audiences in April and July of 2011 respectively. Fonseca credits much of his success to the capabilities of his Lectrosonics equipment.

Presently, Fonseca’s Lectrosonics equipment arsenal consists of SMQV, UM450, and UH400a transmitters, a SIXPACK multi-channel wireless receiver system out fitted with two UDMS 230 UHF RF distributor units, and UCR411a receivers. For IFB purposes, he also uses T4 transmitters and R1a receivers. These are augmented with SNA 600 dipole antennas and an RM remote for use with his SMQV transmitter.

“The sound quality of this equipment is fantastic,” Fonseca reports, “and I find that many actors love the SMQV for its incredibly compact, low, profile design that can be easily hidden in wardrobe. With the RM remote, I can adjust the SMQV’s audio input gain, operating frequency, lock and unlock the front panel controls, and control sleep mode on and off. This is tremendously helpful. I am equally impressed with the range I get in difficult shooting situations with this equipment.”

Fonseca went on to describe how his Lectrosonics gear helps him get first-class results, “Both Game and especially Zindagi Na Milegi Dobara have multiple scenes shot with actors in moving cars. With my Lectrosonics equipment, I never had to worry out about dropouts in the signal. The fidelity of the dialogue captured by my setup was simply awesome and we used only actor mics in all these scenes. Further, when we shot the scenes at the San Fermin Bull Run in Spain for Zindagi Na Milegi Dobara, this was extremely difficult because of the nature of the scene and the vast crowds required for the shoot. With my Lectrosonics setup, I was able to sneak out of sight and still capture all the dialogue and crowd sounds that you hear in the film.”

In addition to sound quality and range, Fonseca is equally complimentary of Lectrosonics’ reliability and the company’s customer / technical support services. “My SIXPACK, the receivers, and my transmitters are all highly reliable,” he reports. Equally important, the gear is extremely easy to use and the company’s support services are exceptional. The most complicated scenes become extremely easy to execute thanks to the never failing reliability of this equipment and the support Lectrosonics provides. Even if it’s a simple question, people like Larry Fisher, Gordon Moore, and Dean Slotness are ever present with answers.”

Fonseca summarized his Lectrosonics experience with the follow thoughts, “Thanks to my Lectrosonics equipment, both Game and Zindagi Na Milegi Dobara turned out fantastic. The films sounded really good and I achieved everything we had set out to do. Numerous people have told me Indian film sound has finally come of age and was every bit on par with elsewhere in the world. In my book, Lectrosonics is a winner!”

To learn more about Baylon Fonseca visit him online at www.imdb.com/name/nm1598555/ or contact him at This email address is being protected from spambots. You need JavaScript enabled to view it..