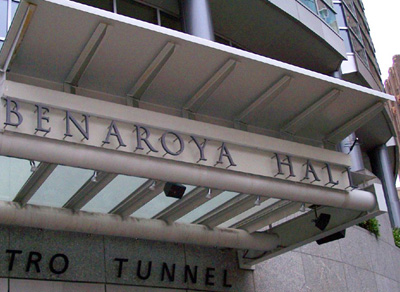 Seattle , WA -- The Downtown Seattle Association recently commissioned Morgan Sound to design and install a wireless distributed audio system outside at Benaroya Hall, the Harbor Steps and the Seattle Art Museum in downtown Seattle 's West Edge Neighborhood. Three of the four outer walls of Benaroya Hall, the full city block home of the Seattle Symphony, and the south outer wall of the Art Museum have JBL indoor/outdoor speakers mounted facing the sidewalks and shops. At the Harbor Steps, the speaker system is located in a plaza-stairs-walkway area that connects First Avenue to the waterfront. With this system, pre-recorded music can be played into the active downtown area with a high degree of fidelity.

"The key to this system was the ability to distribute the audio wirelessly" states Steve Boyce, project manager at Morgan Sound . "We chose the Lectrosonics UM400 beltpack transmitter and R400 single- channel receivers due to the long range and natural sound". The transmitter is driven from an audio system in Benaroya Hall, including a Rane rack mount mixer, a Marantz PMD 670 solid state recorder and a 4-zone Crown amplifier. Each receiver station includes a TOA P924 amplifier, a Lectrosonics R400 receiver with weatherproof directional antenna and the speakers, mounted in custom-made weatherproof enclosures.

"The 100mW transmission power of the UM400 transmitter proved to be plenty for this application, especially when coupled with the ALP700 weatherproof paddle antennas at the transmitters and receivers" notes Boyce. "And the Digital Hybrid Wireless® technology ensures that the audio sounds natural, even when the music might contain a wide dynamic range."