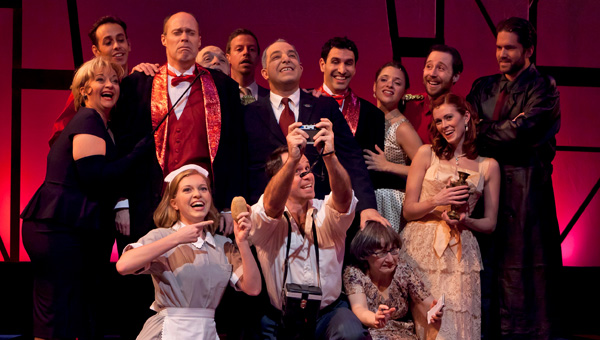 New York, NY – January 2012… With a goal of connecting artists and audiences to each other and to theatrical history, Prospect Theater Company frequently re-interprets classic plays and musicals when creating new works. Such is the case of The Iron Curtain, a new musical comedy set in New York City, Moscow, and Berlin in 1954 about two struggling songwriters kidnapped by the KGB to fix a clunker propaganda musical. Originally scheduled to run from November 5th – 27th, 2011, the show was such a hit that it was extended through December 4th. Sound quality was critical to the show’s success and, to ensure the best audio performance possible, a sizeable arsenal of wireless microphones from Rio Rancho, NM-based Lectrosonics were placed into service.

“Prospect Theater Company is just transitioning into the large scale use of wireless microphones,” Leviss explained. “They previously relied on performers’ voices to project or overhead miking. They’re relatively new to this level of reinforcement, so the ability to maintain natural sound quality was vitally important. I’ve used Lectrosonics equipment on a number or previous projects, and I find the equipment’s sound quality is far more natural than other competing wireless systems. The company’s Digital Hybrid Wireless technology doesn’t employ companding, so you don’t experience the sonic artifacts common in other wireless equipment. Sound quality is right on par with cabled microphones. Knowing this, I felt the Lectrosonics system would be ideal for this show.”

Leviss selected the SMQV, LMa, and UM400a transmitters and the Venue receiver system because size was yet another important consideration on this project. “Most of the transmitters were placed in the small of the performers’ backs,” Leviss reports. “The SMQV’s are particularly compact, so they were a great choice. Similarly, both the LMa and UM400a transmitters are relatively small and easy to conceal in wardrobe. The combination of these transmitters with the Countryman B3 Omni Round lavaliere mics—placed in the mid center of the performers’ forehead among the hair or over the ear— resulted in a wireless setup that was essentially unnoticeable.”

“Backstage space—where we positioned the wireless receivers—was at an absolute premium on this project,” Leviss continued, “so the ability of the Lectrosonics Venue receiver system to house sixteen wireless channels in three rackspaces was a tremendous help. For this show, we had two fully stocked Venue mainframes—each with six VRS receiver modules—while the third unit had four modules. The ability to have that many wireless channels occupying so little space is really impressive.”

With The Iron Curtain an unqualified success, Leviss offered this final performance assessment of the Lectrosonics equipment, “The Lectrosonics gear performed exceptionally well. The creators were all thrilled. They came to me and my sound engineer, Stephanie Riddle, frequently to praise the clarity of the sound and its high level of speech intelligibility. They had produced this show previously and had not experienced the sound quality that we achieved with this equipment so, for them, this was an eye opening experience.”

For additional information about the Prospect Theater Company, visit them online at www.prospecttheater.org.