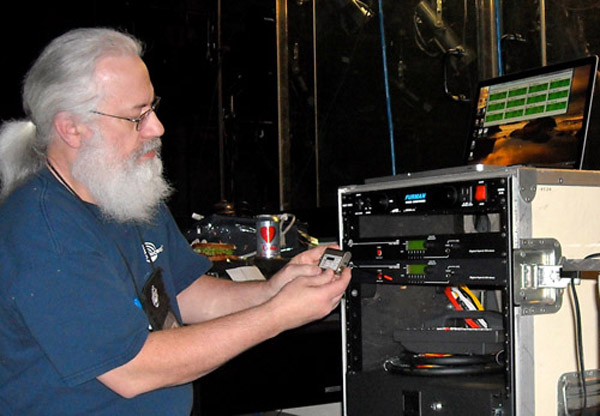 Seattle, Washington… For any theatrical performance, it goes without saying that the ability of the audience to clearly hear the dialog among the various actors and actresses is of paramount importance. This is precisely why wireless microphone technology plays a critical role in contemporary theater. As a means of addressing this all-too-common issue—and to teach students how to use such equipment—Cornish College recently took delivery of a sizeable wireless setup from Lectrosonics that features the company’s highly acclaimed Digital Hybrid Wireless® technology.

Cornish College of the Arts is a fully accredited institution in the greater Seattle area with approximately 800 students that offers the Bachelor of Fine Arts degree in Dance, Theater, Performance Production, Design, and Fine Art, as well as the Bachelor of Music degree. Dave Tosti-Lane, Chair Performance Production Department at Cornish College of the Arts, also serves as the Area Head for Sound Design. Cognizant of the college’s deficiency in the area of wireless microphones, he took delivery of two Lectrosonics Venue receivers—each fully stocked with the company’s VRS receiver modules for a total of twelve channels—along with a dozen SM Series bodypack transmitters, a pair of ALP500 “shark fin” antennas, passive splitters, and antenna cable to assemble the system. Tosti-Lane discussed the factors that led to the college’s wireless equipment acquisition.

“Prior to our new system,” he explained, “we had been unable to effectively teach students how to work with wireless gear, and this was a major hole in our curriculum. Previously, we owned just three UHF systems which were located in the 700 MHz band. The combination of the recent FCC changes that made our previous wireless system unusable, together with an increasing demand for expanding our musical theater program, led the administration to authorize the funds to address wireless in a systematic way.”

Lectrosonics wireless technology offered Tosti-Lane numerous benefits. “I’ve long been watching Lectrosonics on the advice of audio professionals I trust,” he said. “The Venue system offers significant advantages, not the least of which is fitting twelve wireless microphone channels into just two rack spaces. Moreover, the built in antenna routing, multiple options for diversity operation, and the LecNet2 VR panel configuration software made this equipment extremely attractive to me—both as a working system, and as a system that can illustrate the fundamentals of RF (radio frequency) design to my students.”

One of the most daunting challenges for sound technicians working in the theatrical space is the ability to conceal the bodypack transmitters in the talent’s costume, and then access their settings when required. The Lectrosonics SM Series transmitters are ideal for theatrical applications due to their diminutive size and the ability to be controlled remotely. “The SM transmitters are compact and rugged,” Tosti-Lane notes, “and with our RM2 remote control transmitter, it’s extremely easy to work with the system while avoiding the necessity of digging out the transmitter itself once it’s positioned on the talent.” The Lectrosonics RM2 remote control can affect the SM transmitter’s Sleep Mode On/Off, lock or unlock transmitter controls, and adjust the transmitter’s audio input gain.

Tosti-Lane was equally enthusiastic about Lectrosonics’ sound quality and performance characteristics—due in large part to the company’s legendary Digital Hybrid Wireless technology. “The Digital Hybrid system avoids companding,” he said, “and eliminates the need for pre-emphasis in the analog stage, which means we get excellent signal to noise without artifacts and without worrying about distortion with high frequency signals. Add to that the presence of the circulator/isolator circuit to reduce intermodulation problems when transmitters are in close proximity, and the package seems hard to beat.”

While Cornish College of the Arts only took delivery of their Lectrosonics system in January and hadn’t fully assembled their roving equipment rack until February, the new equipment has already made a significant impact. “The system’s sound and performance has been terrific, says Tosti-Lane. “So far, I’ve used the system in class to show the difference between using ¼ wave antennas and LPDA antennas by running the scan and taking screenshots of the spectrum to compare. We also tried out the SmartTune frequency assignment feature with great success. While we’re starting with twelve channels, our plan is expand the system to twenty-four or thirty-six channels. We’re just now getting ready for our first musical since assembling the system— Urinetown: The Musical— which opens in early April, and we’re very excited about using the equipment for that project.”

For additional information about Cornish College of the Arts, visit them online at www.cornish.edu.