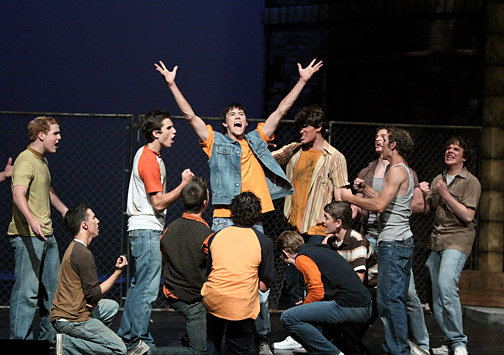 Huntley, IL – September 2009… As an after-school theater arts education program for kids ages 6-18, the Chicago, IL-based Christian Youth Theater (CYT) offers students an opportunity to develop their talents, interact with friends, and learn to be a positive member of their community. The organization recently sponsored performances of West Side Story, the highly acclaimed musical based on the book by Arthur Laurents, with music by Leonard Bernstein and lyrics by Stephen Sondheim. Featuring an “all star” cast comprised of the top talent drawn from the area’s various schools, the musical’s creative staff sought the best possible sound for their production, which ultimately led to the inclusion of wireless technology from Lectrosonics.

East Dundee, IL-based Kerusso Technology Group, Inc., which specializes in live sound with an emphasis on church and theatrical applications, was contracted to provide sound reinforcement for the show. Daniel Chin, President of Kerusso Technology Group, discussed the challenges the project presented. “This production took place in the District 158 Performing Arts Center, which is part of the Huntley High School campus,” notes Chin. “Upon inspecting the 650-seat theater’s sound system, we determined the system to be inadequate for the type of project we were about to stage. On that note, the decision was made to have us handle all sound system logistics.”

“For West Side Story,” Chin continued, “we brought in our own loudspeakers, mixing console, microphone equipment—everything. We placed the FOH (front of house) mixing console and all the receivers in the middle of the audience, but there was no good way to run cabling up to the catwalks for the amplifier, as it would have not only created a hazard for the audience, but would also have required an exceptional amount of cable. For this reason, I opted to take a wireless approach.”

Chin selected a Lectrosonics D4 digital wireless system to circumvent the cables leading from the mixing console. The D4 is starting to be used as a special purpose system for location production in film and television and is designed for line level analog audio signals and AES/EBU digital audio signals. A D4T transmitter and a D4R receiver can be set up as a 2-channel or 4-channel system. It made the ideal tool to resolve the cabling challenge for the production of West Side Story, as Chin explained.

“While line of sight was short at perhaps only 60 feet.” said Chin, “It could have easily been a quarter mile cable run had we not taken a wireless approach. We configured the D4 system to handle the left-right stereo feed from the console to the main loudspeakers. The third channel was used for stage monitoring and the fourth channel handled off-stage monitoring to the green room, dressing rooms, and other technical areas. The result was a clean, uncluttered area between the mix position and the stage. Audio performance was first rate—with not so much as a single dropout.”

West Side Story ran from July 24th through August 2nd and was met with rave reviews from all who experience the show. Chin reflected on the project, “The Lectrosonics gear really came through for us. The clarity of sound was better than any we've ever had in that theater. The D4, which has such a wonderfully low noise floor, did its job of transmitting audio accurately without as much as a hiccup. Similarly, the wireless microphones did a great job and provided the freedom of mobility the talent needed to perform. Lectrosonics wireless technology made a world of difference to the success of this show.”

For further information about Kerusso Technology Group, Inc., contact them at 847-366-5808.