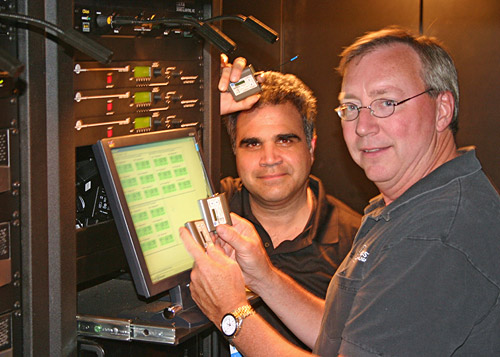 Omaha, NE – August 2009… As “the world's largest community theater,” the Omaha Community Playhouse offers opportunities in performing, technical work, and support categories to more than 2,000 community volunteers by way of its ongoing theatrical presentations, education and outreach programs, as well as the efforts of its professional touring division, the Nebraska Theatre Caravan. While the theater has consistently received reviewer accolades for its performances, sets, and other support logistics, it has received criticism for its production audio. After suffering through more than its fair share of dropouts, RF interference, and other audible annoyances, company management decided there had to be a solution, which they found in the form of a new wireless microphone setup from Lectrosonics.

Tim Burkhart, who oversees the Design Systems Group for Midwest Sound & Lighting, Inc., a provider of design/build AV solutions to businesses and organizations throughout the Midwest, was called in to help resolve the theater’s challenge. “In order for the talent to be heard,” said Burkhart, “wireless microphones are the only real choice to provide the freedom of mobility required for theatrical presentations. Unfortunately, the Omaha Community Playhouse is situated in an area with a lot of RF (radio frequency) activity. There’s an antenna farm nearby used by the area’s broadcasters and, in the past, this caused huge problems with interference and dropouts.”

After evaluating the theater’s requirements and observing the issues they were experiencing, Burkhart specified a new wireless microphone system consisting of sixteen Lectrosonics SMDa Super-Miniature Digital Hybrid Wireless® beltpack transmitters, two UH400a Digital Hybrid Wireless plug-on transmitters, and three Venue VRM receiver units—each fully stocked with six VRT receiver modules—for a total of eighteen wireless channels. Additionally, a Lectrosonics RM remote control was purchased to manage the SMDa transmitters without having to interfere with an actor’s wardrobe. The entire system is housed in an equipment rack and is managed by a PC running Lectrosonics’ highly acclaimed VRpanel software that provides an intuitive means of configuring the Venue receivers for frequency assignment, level, and numerous additional parameters. Countryman E6 and B3 microphones are used with the transmitters.

The new wireless system, which was deployed in August 2008 for the start of the theater season, has performed very well since it was first placed into service. “The new equipment performed flawlessly throughout the entire season,” reports Burkhart. “Before the installation of the new system, local reviewers always said very positive things about the lighting and the sets, but would routinely comment on the various sound issues caused by the previous wireless equipment. The theater tried systems from all the wireless equipment providers and the Lectrosonics gear has proven to be, by far, the most reliable.”

Most recently, the Lectrosonics wireless system was an integral part of the Omaha Community Playhouse’s presentation of Always… Patsy Cline. A production about Ms. Cline and her music, the show is based on the true story of the Nashville legend and Louise Seger, a fan from Houston, who befriended the star in a Texas honky-tonk.

During the installation, Burkhart and his team had a few questions concerning the best means of configuring the theater’s new wireless system and this led to a conversation with Lectrosonics’ customer service/technical support staff. “Lectrosonics’ tech support is among the best in the industry,” says Burkhart. “The support personnel are very responsive and they did a great job helping us get everything setup exactly as it needed to be. They were a pleasure to deal with.”

With their new wireless system fully operational, Burkhart reports that the theater’s new setup is performing beyond everyone’s expectations. “Both myself and John Gibilisco, who is the staff sound designer for the theater, have worked together in theatrical sound for over 20 years,” said Burkhart. “We didn’t choose the Lectrosonics equipment based on marketing hype or anything like that. We chose this equipment because we required a set of tools that worked well and was reliable. The Lectrosonics equipment not only meets, but exceeds the expectations we had for it. Our client is absolutely delighted with their new system.”

For additional information about the Omaha Community Playhouse, visit them online at www.omahaplayhouse.com. To learn more about Midwest Sound & Lighting, Inc.; visit the company’s website at www.mwsound.com.