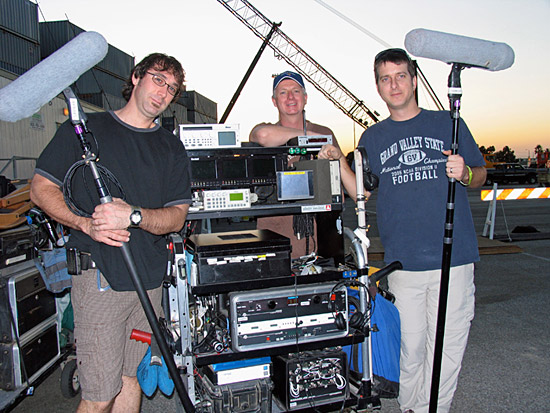 Los Angeles, CA – June 2009… When it comes to high profile feature films, sound mixer Peter Devlin’s credits are tough to beat. Currently among the hottest films of summer 2009, production sound for both Star Trek and Angels and Demons are examples of Devlin and his crews’ work. Add to this Frost/Nixon, Transformers, and many other films, and you begin to appreciate the high level of Devlin’s accomplishments. Since arriving from Belfast, Northern Ireland in 1987, this LA-based audio professional has been at the forefront of his field and, from the start, has been an avid enthusiast of Lectrosonics wireless technology.

“While it may not have been my first Lectrosonics-based project,” states Devlin, the way the gear held up during the making of Oliver Stone’s Any Given Sunday made a tremendous impression on me. The abuse that the Lectrosonics transmitters absorbed during the production of this football-themed film really impressed me and convinced me that Lectrosonics equipment was the best possible choice for this type of audio work. That was 1999 and I’ve been using Lectrosonics gear consistently ever since.” Currently, Devlin is working in Pittsburg, PA on the forthcoming Lionsgate mixed martial arts film Warrior, starring Tom Hardy, Joel Edgerton, and Nick Nolte.

These days, Devlin uses a combination of four Lectrosonics SMa Super Miniature beltpack transmitters in tandem with his Venue receiver system that is stocked with four VRT receiver modules—equipment all built on Lectrosonics’ highly acclaimed Digital Hybrid Wireless® technology. With the ability to house six receiver modules inside the 1RU rackspace chassis, his Venue system still has room for expansion. This equipment is augmented by a Lectrosonics SIXPACK multi-channel wireless system with RF/power distribution for up to six Lectrosonics compact diversity receivers. For this segment of his equipment arsenal, Devlin uses his trusty Lectrosonics UM400 UHF beltpack transmitters.

When asked about those features of his Lectrosonics gear that he finds most notable, Devlin focused initially on the SMa transmitters. “The compact size of the SMa transmitters is a huge plus in my line of work,” says Devlin. “The transmitter’s small size is one of its most compelling features, as it makes concealing the unit in the actor’s wardrobe much easier. On Star Trek, we had very form fitting wardrobe considerations and it was very important to be able to fully conceal the transmitters on the actors. The SMa’s did the job perfectly. Even though the SMa is a very small unit, it sacrifices nothing in terms of audio quality. I’ve been using Lectrosonics for 17 years or more and the sound quality has consistently been excellent.”

Lectrosonics’ range and frequency agility also received high marks from Devlin. “Range has never been an issue with the Lectrosonics equipment,” notes Devlin, “and the ability to easily isolate open frequencies and lock them down is excellent. The Venue’s one button approach to scanning, locating, and selecting available frequencies is very fast and never gets in the way of production.”

Devlin is also a big fan of Lectrosonics RM remote control for the SM Series transmitters. “When working with challenging wardrobe,” Devlin commented, “the RM remote makes it so easy to adjust level, change frequency, or just put the unit into sleep mode. I never have to hold up production to make this type of setting change. The RM is a great addition that makes my work in the field that much easier.”

In addition to his own equipment, Devlin rents additional Lectrosonics gear as production requirements demand. While working on National Treasure: Book of Secrets, he deployed several Lectrosonics MM400c water resistant Digital Hybrid Wireless transmitters. “For that film,” said Devlin, “we did a significant amount of work in a waterfall area on the backlot at Universal Studios. Thanks to the MM400C’s, we were able to capture useable dialog and not have to concern ourselves with any water damage. The transmitters provided considerable peace-of-mind knowing that we wouldn’t have to halt production because of water-soaked equipment.”

Complementing a consistently positive set of experiences with his Lectrosonics wireless equipment, Devlin reports that Lectrosonics’ customer and technical support services is second to none. “During preparation for the film Transformers, I was informed that we’d be shooting at Holloman Air Force Base in New Mexico,” Devlin said. “I was contacted by the production company’s locations department and informed that our radio frequencies had to be specifically licensed for shooting inside a military base.”

Lectrosonics technical support services were able to guide me through the process of configuring the equipment and get it licensed for the period of time that we’d be working in the area,” he continued. “Gordon Moore, Vice President of Sales for Lectrosonics, was able to quickly identify that process for me. The support that Lectrosonics provides for their products is unequalled in our industry and this is one of the key factors that keep me going back to the company whenever I need new equipment. Everyone at the company is a pleasure to deal with.”

For additional information about Peter Devlin, contact him via email at dbdaudio(at)mac(dot)com.