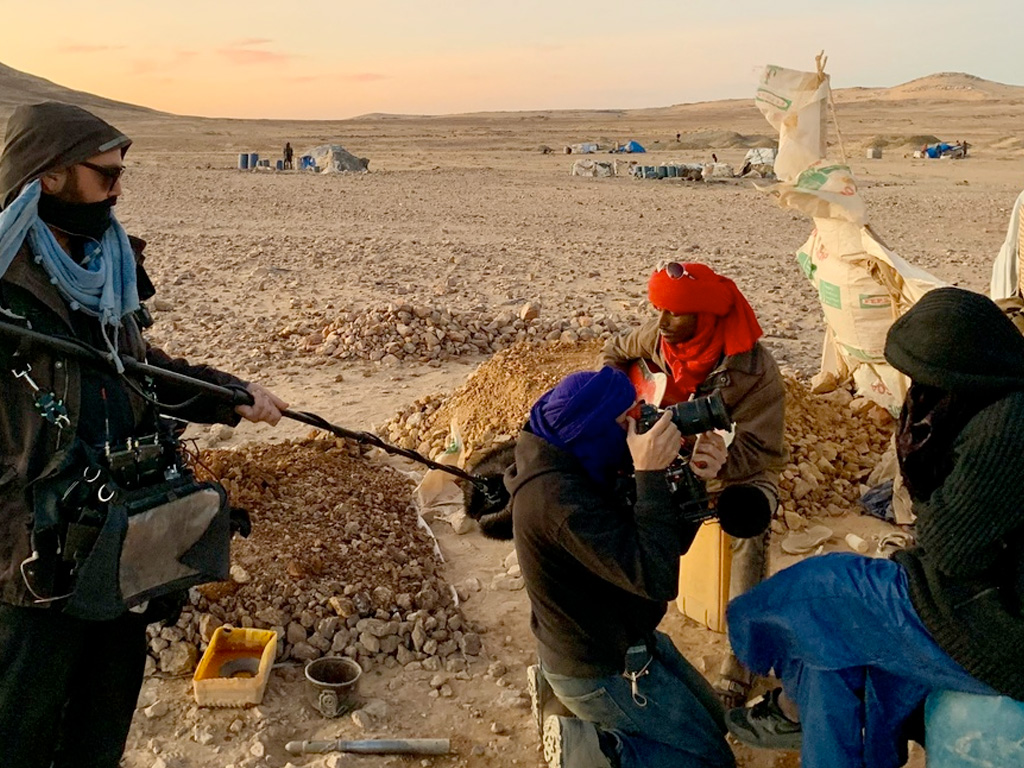 “I wanted to go into serious action and Lectrosonics was the way. No doubt!”

Igor began what he calls his “Sound 101” learning experience as a young teenager working punk rock concerts and the alternative scene in his native Switzerland. He learned how to use sound boards, patch lists, and how to get the most out of cheap and DIY gear. Then he went roving in Western Africa for a couple years and landed his first shoot wrangling cables for an African TV series, which he describes as “sort of a telenovela.”

Upon returning to Switzerland, he studied audio theory at Centre de Formation aux Métiers du Son (CFMS) in Lausanne and earned his diploma in audio engineering. He started accumulating a working kit as he worked on student projects and developed interests in immersive audio, virtual reality, and Ambisonics techniques.

“I read about Lectrosonics reliability online,” Igor explains. “I had been ‘nerding’ a lot, spending countless hours reading reviews, comparing specs and manuals of different products.” The more experienced colleagues were more than happy to share their knowledge. “I saw that everywhere in the world, serious setups used Lectrosonics stuff.” He saved his money and bought his first SRc receiver and two second-hand UM400 transmitters. Later he added another SRc and two SMQV transmitters to his sound arsenal. He adds, “I wanted to get into serious action. And Lectrosonics was the way. No doubt!”

Igor’s documentary work has taken him to the Arctic Circle, southern Asia, Scandinavia, the African bush, barrios in Guatemala, the Sahara Desert, and many other fascinating locations. Working sound in the wild so far afield presents challenges that seldom come up in studios — for example, there’s no way to get spare parts or replacement units, so everything just has to work and keep on working. Igor says his Lectrosonics gear has the qualities and performance to meet them, “Oh yes, range and solidity! It gives me peace of mind.” The transmitters, which he typically pairs up with DPA lavalier mics, can take some serious beating and will still work, providing outstanding results in some very stressful situations. Sometimes the talent may accidentally drop one of his transmitters on the floor, but it keeps on working, rock solid. He admits that such incidents make him worry needlessly, but he is always pleased that the Lectrosonics pieces keep on sounding perfect.

He rates the documentary project Cosmic Birds in the Amazonian jungles, shot in VR, as his most challenging. The conditions were very difficult, with humidity and insects. Still, his Lectrosonics equipment delivered without fail. He calls it an unforgettable experience, and that’s what he loves about his chosen line of work. “Oh, I’ve had lots of luck during my young career. I’ve traveled a lot,” he says. “I have seen lots of amazing places and met super interesting and various people — indigenous tribes, Masai people, Touareg people in the Sahara.”

He describes the Touareg as a tribe of welcoming, proud, and absolutely great people whom he got to know very closely during a late 2021 shoot in the Sahara for a yet-untitled documentary. He likened the adventure to “Mad Max, Touareg Style,” and described filming a gold rush out “in the middle of nowhere.” Just sand and rocks, he says, and very young people struggling, digging, surviving, and “looking for gold in this absolutely unforgiving and very hostile environment. No water or food or shade, just sand, dust, and the damn wind.” The Niger government granted permission to shoot there on the condition that the crew would be constantly escorted by heavily armed soldiers to prevent any possible kidnapping or even assassination. The guards accompanied them in four heavily armored vehicles, two of which were armed with a large machine gun mounted on the back. Wherever he and the other crew members went, even to relieve themselves in seclusion, they were followed by men carrying a Kalashnikov rifle. They travelled days beyond the city of Agadez into what many would consider a forbidding “no-man’s land,” even though it still is lightly populated.

But Igor remembers the sky at night — the stars! — and the people! They had some very deep and beautiful moments, like impromptu concerts of Touareg guitar. Comparing his world with the one he was visiting, he concludes, “These men have all been into serious action. My tools are mics, booms, poles, and wireless; theirs are rifles, knives, and surviving in one of the harshest regions in the world.”

New adventures await Igor Marlot and his Lectrosonics kit. An upcoming documentary project particularly excites him because it will bring him to Turkey. He also contemplates some ENG gigs and documentaries in the works closer to home, in Switzerland.