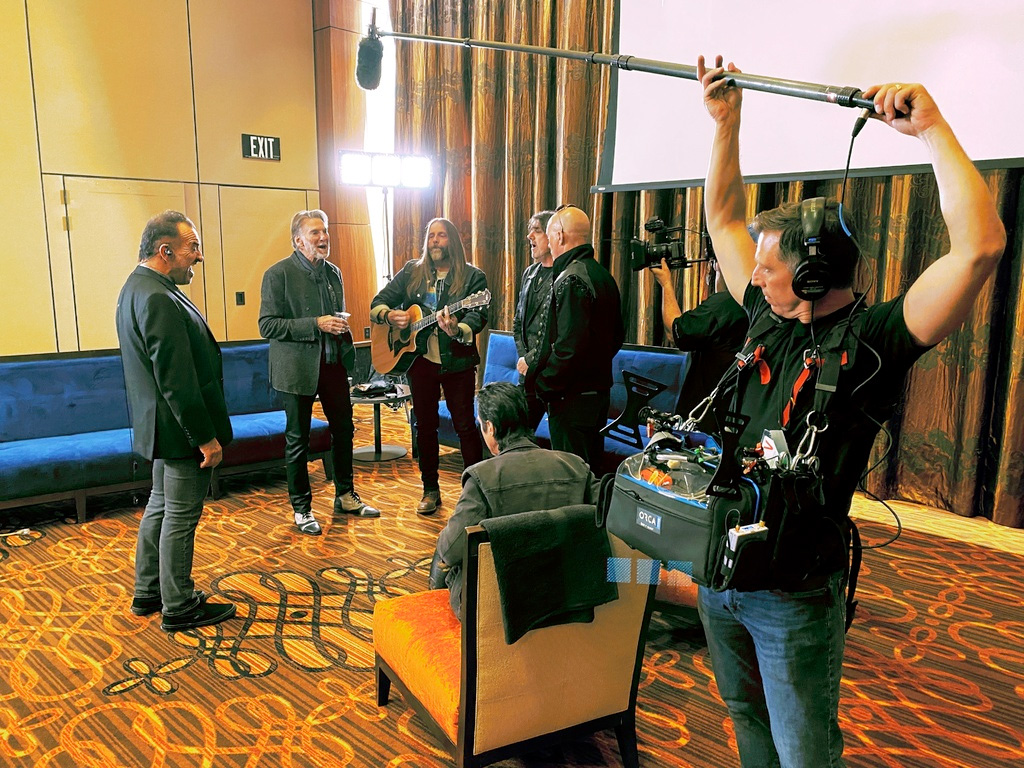 “I just feel I’ve had much better results when I’ve used Lectrosonics over the years, through multiple generations of their products.”

Columbus, OH (July 19, 2022) — Since 1996, Eric Vucelich has been at the forefront of field production mixing in the greater Columbus, Ohio metropolitan area. He’s done it all: national news, pro and college sports, commercials, presidential campaign ads, corporate video, documentaries, and more. For this ever-changing slate of projects, he relies on Lectrosonics wireless, including two dual-channel SRc and three SRb Digital Hybrid Wireless receivers. His transmitters comprise four SMWB wideband packs supplemented by six SMQVs. As he explains, these get him through any conceivable job—even if the next one is a departure from the last, as it usually is.

“Here in Ohio, you can’t just focus on one avenue of production. It’s a mixed bag, so every couple of days there’s a very different job,” says Vucelich. “I’ve recently done spots for CBS Sunday Morning, CBS Sports, and the Ohio liquor control commission. I’m doing one for Safelite Auto Glass next week. Every single bit of it, everybody was wireless or will be wireless. It’s not like the times where everyone is fine with a boom. So, it’s important to have equipment that’s reliable.”

With Vucelich frequently covering sporting events at Ohio State University as well as other high-impact sporting events, this reliability is regularly tested. “I’ve had athletes sweat all over their packs with no issues,” he recalls. “One time, I had the goalie of the Columbus Blue Jackets [hockey team] pouring water from a bottle all over his face during practice. Lots of water. It was running down inside his uniform and soaking the transmitter. I don’t recommend trying this intentionally, but the pack didn’t give up and we kept recording. You do your best to protect the gear, but there are always surprises.”

The division of labor between Vucelich’s SMWB and SMQV transmitters roughly tracks what the application of the day requires more: RF flexibility or extended runtime, respectively. On the first count, Vucelich says, “In Ohio, blocks 22 and 23 are pretty good, but 21 has very few frequencies left. Block A1 is also crowded though you can still find some decent nooks within it. My going wideband was driven by one experience I had at Ohio State. I got to the stadium and was told the crew covering Penn State [the visiting team] had taken everything available in block 22. There wasn’t much of 21 clear, either. That’s when I decided I needed more options. I use the SMWBs almost exclusively now.”

However, the SMQVs still have their role. “I also grab radio feeds from the home and away teams,” Vucelich continues. “The SMQVs have two batteries instead of one, so I’ll stick one on the radio feed for the home team and one on the away team. We use this to transmit down to the camera operators on the field, who listen to the play-by-play chatter and make decisions on the fly about where to track the action next. These feeds are also used in the final cut of the show. From initial setup before the game to wrap, you’re looking at about eight hours, and with the SMQVs I’m not worried about changing batteries.”

A secondary benefit of the SMQVs is range, as Vucelich notes: “Although I don’t usually have to get too far from the camera and the talent because I do a lot of ‘one man band’ type work, there might be a commercial or something where there’s car-to-car stuff going on. I like knowing that I can push the SMQVs up to a quarter-watt output power in conjunction with a good antenna and get the range required.”

However, Vucelich is quick to point out that his newer SMWBs are no slouches when it comes to range. “For the Ohio liquor control spot, we were on a farm,” he says. “The miked talent was driving a tractor. The tractor cab was all windows surrounded by metal. I was standing by the field with just my bag, little bowtie antennas on it, and he got at least a hundred feet away with no degradation in sound quality.”

Asked how and when he discovered Lectrosonics, Vucelich offers a compelling anecdote: “I have two degrees in music and playing in bands led me to working in a recording studio in Atlanta. When I moved back to Ohio in 1996, I jumped right into production. We didn’t have the ability we do now to research gear online, so I would hunt and peck and talk to colleagues. I would get hired to do jobs using other people’s wireless gear, and at the time they had either Sony or Lectrosonics. I noticed that whenever I used Lectro, I preferred the sound quality and always got great range. So, I bought some of my own.”

Sadly, that gear was stolen. “That’s the only nightmare story I have about Lectro,” laughs Vucelich. “I used a competitor for a while after that, but I found that in a crowded environment with obstructions or high body density, if I lost audio, I completely lost it. So, I sold it off and went over to the Lectro Digital Hybrid stuff. I miked up my kids and we did walk tests in my yard, and even when they’d start to get out of range, I would still receive some audio, so there was more advance warning.”

The ensuing peace of mind has become a professional must for Vucelich. “When you’re doing sports and news, there turnaround times are very fast and there’s no opportunity to re-engage with the subjects — when they’re gone, they’re gone,” he explains. “That’s a huge part of why I went back to Lectro. They seem to put in more research than other companies before they release products. Recently, I just ordered the new digital receiver, the DSR4. I’m not moving away from Lectro again. I just feel I’ve had much better results over the years when I’ve used Lectrosonics, through multiple generations of their products.”