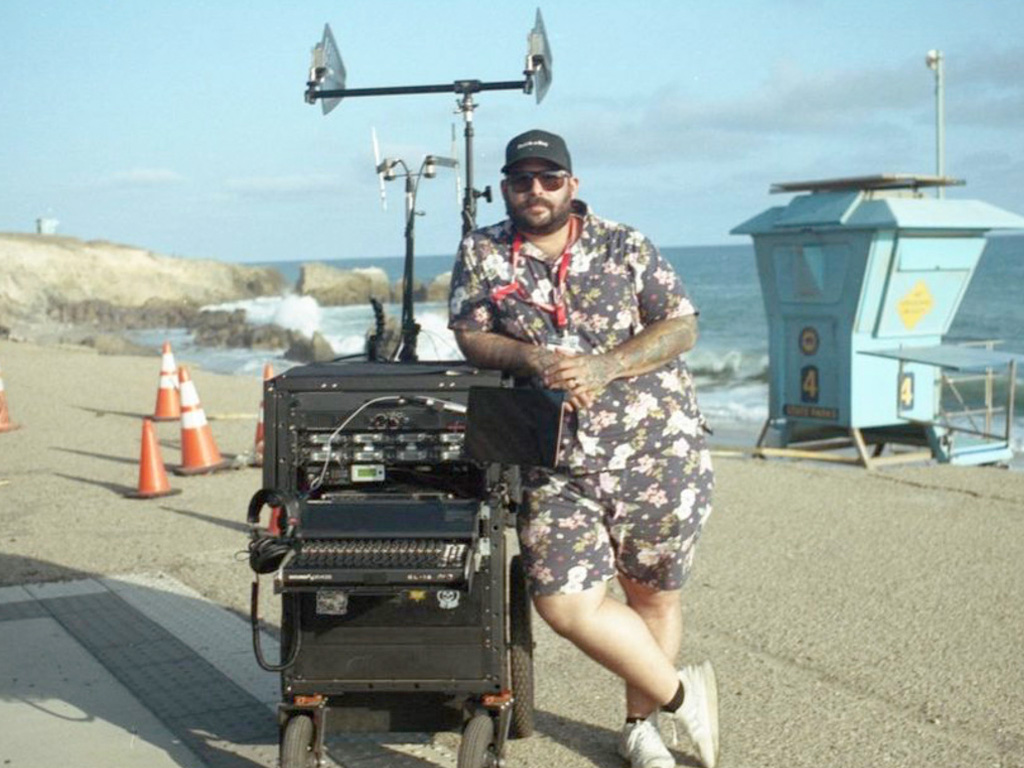 “The show demands a lot. The wireless must be reliable every time. Lectrosonics is up to the task — no dropouts or interference even over big, open spaces.”

“Selling Sunset is one of the most popular shows on Netflix,” Contreras explains. “The show demands a lot. The wireless must be reliable every time.  Lectrosonics is up to the task — no dropouts or interference even over big, open spaces.”

A native of San Lorenzo, Puerto Rico, Contreras has been doing production audio for 15 years, ever since he moved directly to LA right after graduation. He gained familiarity with Lectrosonics products, like the venerable UM400, while pursuing a BFA in Film and Television at the Savannah College of Art and Design (SCAD). So, there was no question that he would buy Lectrosonics when he set up shop in LA. “Gotta buy stuff that’s reliable,” he says.

Reliable indeed, because over the years he’s had to deal with what he terms “rowdy cast members” in various productions. One person even tried to light some pieces of his gear on fire.

Selling Sunset has a cast of ten, while the upcoming OC show’s cast numbers total eleven. The West Hollywood and Newport Beach offices of the Oppenheim Group, the realty agency at the heart of the show, serve as live sets for the shows, and the lavish homes on location are featured prominently as well. So far, nothing out of the ordinary, right? Well, Contreras also faces the unusual challenge of occasional runaway cast members. Yes, runaway, as in wandering from the production scene. It’s all part of the drama of cutthroat Hollywood luxury home sales. Still, he can often pick up a signal from the SMWB or SMDWB transmitters and by listening, get a sense of where the talent has gotten off to, all the better to regather the group and continue the shoot. Being able to get a signal and PFL a channel has “saved his butt” on numerous occasions.

An identifying characteristic of the two shows is that the cast members are mostly leggy female real estate agents who tend to wear body-conscious minidresses. Hiding the wireless transmitters on such wardrobe can be a challenge, but the miniature size of the Lectrosonics pieces seriously helps as they can be belted to a leg, hidden in the small of the back, or any other bodily location they might improvise. His main go-to units are the SMDWB, which are basically a double-battery version of the SMWB. He typically mates them with a Sanken COS-11D omni lavalier mic, but sometimes with a DPA 6060 or 6061. In the LA/OC area he uses the Block 22 frequencies.

A perhaps underappreciated feature of the SMWB and SMDWB transmitters is their high-quality built-in digital recorder, which produces a .wav file — compatible with practically any editing software — stored on an internal microSDHC card. Contreras recalled one last-minute call to work on a job that involved a shot with an actor at a difficult long range. Recording the actor right on his SMDWB transmitter saved both setup time and the shot itself.

Contreras has 18 SRc portable ENG receivers, and in a typical Selling Sunset or Selling the OC shoot he uses six of them in a bag feeding a Sound Devices Scorpio portable mixer-recorder. He describes the setup as “really quick” on the transmitters and receivers. In fact, such ease of use is a highly desirable feature when he hires an assistant, or when he rents out his equipment to other productions. “Everybody knows how to use Lectrosonics,” he points out, and the company is easy to work with, especially its customer service that Contreras says is “crazy good.”

The Selling shows’ seasons are shot back-to-back, so they get two out of a single production season. Contreras looks forward to resuming work on Selling Sunset later this summer, which will run to the end of the year, with the new show, Selling the OC, set to premiere on Netflix this summer.

About Lectrosonics
Well respected within the film, broadcast, and theatre technical communities since 1971, Lectrosonics wireless microphone systems and audio processing products are used daily in mission-critical applications by audio engineers familiar with the company’s dedication to quality, customer service, and innovation. Lectrosonics received an Academy Scientific and Technical Award for its Digital Hybrid Wireless® technology and is a US manufacturer based in Rio Rancho, New Mexico. Visit the company online at www.lectrosonics.com.