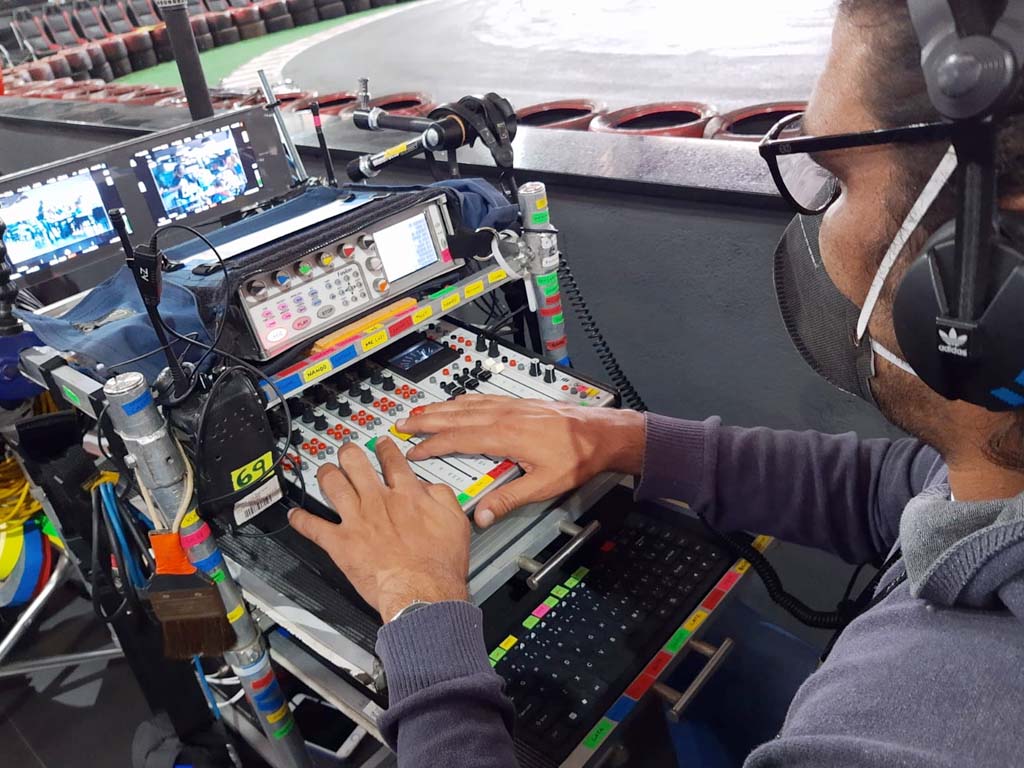 “The quality of the transmission and the audio from the lavalier mics are amazing!”

São Paulo, BRA (November 30, 2021) — Created by Brazilian filmmaker KondZilla, Sintonia is a young adult drama following three friends they navigate living in the favelas (shantytowns) of São Paulo. Narrated from the perspectives of the three main characters who grew up together, Doni, Nando, and Rita, the series follows the interconnectedness of music, drug trafficking and religion. After only one season, the series entered Netflix’s top 10 in Brazil and top 30 worldwide. Veteran sound mixer Leandro Lima, who started apprenticing in production sound at age 17, handles all the dialogue using Lectrosonics SMQV Digital Hybrid Wireless transmitters and UCR411a receivers.

“The Sintonia project was a big challenge for the audio team,” says Lima. “We had a lot of scenes with live instruments such as guitars, keyboards, drums, and a live band playing while the actors were doing dialogue. Everything went perfectly! This was possible because we had a great team orchestrating these scenes — direction, photography, costume, makeup, electrical —all these departments were in sync with sound team.”

For the dialogue component, Lima credits the “transmission, power, and sound quality” of the SMQV transmitters, not to mention the tuning range of the UCR411a, for the smooth experience and stellar results — even under challenging RF conditions. “São Paulo is one of the worst places in the world to film in terms of sound, because we have a lot of problems with radio frequencies in the air,” he explains. “But I was able to use different blocks and quickly scan for new frequencies on the 411s if there was a problem. So, we were able to work with comfort and tranquility. Shooting a scene with fear that RF won’t work is not good for your health, and Lectrosonics gave us peace of mind about this issue.”

Lima is no stranger to Lectrosonics, having first heard about it during his assistant years. “As someone who is self-taught in film sound, every time I worked with some ‘big’ sound guy I always tried to get as much information from them as possible, and after some years of learning I started to build my own equipment pool. I’ve worked with many types of lavalier microphones and body packs, but after discovering Lectrosonics and the power of their transmitters, I fell in love. The final quality of the recordings was always incredible, so as soon as I could, I migrated to it.”

His own purchase came concurrently with the release of the first film on which he was lead sound recordist, Sergio Machado’s Ciudad Baixa (Lower City), which garnered 28 awards and 34 nominations at various international film festivals. “In 2006 I remember buying my first Lectro gear,” he says, “which was a 411 and a plug-on transmitter. Since using it, I’ve never changed back to another brand of wireless.”

Lima says he’s “super curious” to audition Lectrosonics’ next-generation family of all-digital D Squared equipment, which is known for its range and rock-solid retention of usable channels even in a very limited RF spectrum. Perhaps that will happen on upcoming projects. “At the moment I’m waiting for the third season of Sintonia on Netflix as well as the premiere of a movie I directed, which is called Odilon, His Own Prisoner. It tells the story of a real-life federal judge who’s a national hero for hunting down drug traffickers.

Whatever credits and accolades Lima adds to his CV of over 70 films and television series, one thing is for sure: If he’s on the production, so is Lectrosonics: “As I said before, I will never use anything else ever again. The quality of the transmission and the audio from the lavalier mics is amazing!”