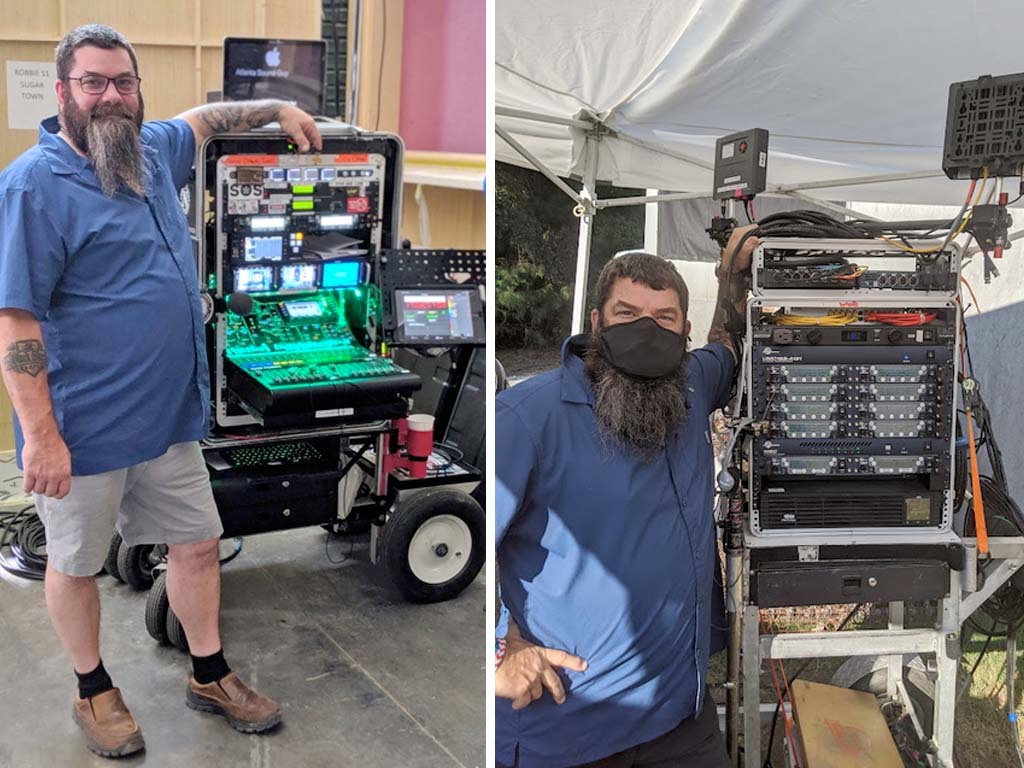 “I can use a digital hybrid SMV transmitter right next to a digital DBu transmitter in the same receiver and experience no crosstalk, no lack of service, no lack of RF, and no loss in performance. Lectro is on point making the digital products backwards compatible, realizing that their users have a budget and that they like their legacy gear. And the performance is just incredible.”

Atlanta, GA (September 09, 2021) — Location sound mixer Aaron "Cujo" Cooley, C.A.S. exemplifies the age-old adage that when the going gets tough, the tough get going. When the FCC’s TV channel repack shrank the available VHF spectrum, Cooley, a longtime user of Lectrosonics wireless equipment, responded with a remote setup that maximized RF performance on set and on location. And when COVID-19 hit, he kicked things up a notch, rolling out a mobile studio in a 16-ft box truck to create his own bubble. His extensive arsenal includes Lectrosonics D Squared equipment, M2 Duet Series IFB equipment, SR series receivers, and a wide variety of over 40 other Lectrosonics transmitters that he has purchased over the years.

Cooley, whose credits include work on The Falcon and the Winter Soldier, Lovecraft Country and Jimmy Carter: Rock & Roll President, was an early adopter of a Dante workflow, he says. In 2015 he added a Ferrofish converter to his setup to ensure pristine audio while minimizing the amount of cabling on his sound cart. Then, when Lectrosonics was developing its Dante-enabled D Squared digital products, the company selected him to beta-test one of the new devices.

“When I added in the Lectrosonics D-Squared digital transmitters to my work, so much of our location problems disappeared,” he says. “When you get into the digital realm you just eliminate all the noise floor, which helped me in my gain-staging. I was able to reduce my overall gain by several dB, which not only made the tracks quieter, it also gave me additional headroom, which gave me additional dynamics.”

As the years-long TV channel repack proceeded across the U.S., Cooley leveraged his expertise with Dante networking to develop a remote mixing solution. “We saw a few years ago that the RF spectrum was getting crushed; I knew I would need to adjust my RF strategies. I started experimenting with a remote rack and bringing everything back to me over Ethernet, because it was inexpensive and easy to do with Dante. Now I roll a remote rack onto the set and run a fiber optic network, so I can be away from the set. That gets the antennas close to set, which is what we always need for good clean RF.”

That first D Squared unit has since been joined by many others. “I have a rack of 10 D Squared receivers and M2 Duet series equipment. I have about 40 Lectrosonics transmitters of every iteration all the way back to the 400a, plus two SR receivers in my bag rig,” he says. “I have a lot of Lectrosonics gear.” His cart rig also includes a Midas M32 digital mixing console and a Sound Devices 970 recorder, while his bag rig features a Sound Devices 688 mixer/recorder.

The advantage of adding Lectrosonics digital hardware versus most other brands, Cooley says, is that there was no need to replace his entire setup, as the new digital products are backward compatible with all of the legacy products. “For me to replace everything that I have would cost me almost $100,000, and that’s unreasonable. But I can use a digital hybrid SMV transmitter right next to a digital DBu transmitter in the same receiver and experience no crosstalk, no lack of service, no lack of RF, and no loss in performance. So Lectro is on point making the digital products backwards compatible, realizing that their users have a budget and that they like their legacy gear. And the performance is just incredible.”

When COVID took hold, he says, “It accelerated my remote workflow program at light speed. In order for me to work I needed to be even further away from set and even more segregated from people so that I could stay healthy.” Cooley was already talking with renowned Athens, GA-based audio engineer Jim Hawkins, who was retiring, about buying his converted 16-foot box truck, which he had been using for location recording and broadcast production work. “So I bought the truck and retrofitted it,” he says.

Hawkins is well known for building and running the first Capricorn Records recording studio in Macon, GA, beginning in the late-1960s, and worked with the Allman Brothers Band, Tim Hardin and Livingstone Taylor. Cooley grew up around live music in upstate New York where his stepfather shared the stage with Sly Stone, Ronnie James Dio and members of the Doobie Brothers. Later, when he moved to Georgia, Cooley became a front-of-house mixer working with Christian rock bands. He cherishes the musical history behind the truck. “I have Jim’s business card hanging in the truck as an homage, and the set list from the last gig that the truck did, which was an Otis Redding celebration night in Macon,” he says. “And I have Jim’s old chair!”

Positioning his Lectrosonics gear and remote rack close to the action, “I have all of my audio and video feeds coming into the truck over a dedicated fiber optic network, converting to Dante and SDI,” Cooley says. “I mix on an Allen & Heath SQ-7 console and record into Sound Devices 970 recorders. I have a pair of Genelec speakers mounted up on the wall, so I’m listening in the same environment that the editors are working in. If it sounds good in my truck, I know that when it gets to the edit bay it’s going to sound fine. I basically have my own little broadcast truck that I live in,” he says, where he can maintain appropriate pandemic distancing requirements.

For much of 2020 Cooley worked as head of the audio department at Tyler Perry Studios, a 330-acre lot on the grounds of the former Fort McPherson army base in Atlanta. “I was using a minimum of 25 channels per day and at times up to 50. To put out 25 or more channels takes some really good coordination work. And Lectrosonics’ Wireless Designer software made all of that possible.”

The high channel count was due to the pandemic. “For COVID compliance we assigned one transmitter and one lav to each actor. Sometimes the script would change on the fly, so putting a wire on every single person was just mandatory. If they were on the call sheet, they got a wire,” says Cooley, who generally relies on DPA Microphones lavs. “We would generally see all of those actors throughout the day and at times as many as a dozen or more on set at any given time, so it was necessary to have a very deep level of gear.” He also has a variety of mic models available to cover any application.

For some eventualities there is no substitute for Lectrosonics, Cooley says. “I was on a show where there was a playback operator on my set and another mixer on another set about 100 yards from me. If I’d had any other system it would have been a train wreck, trying to coordinate everything. Lectrosonics absolutely wins the day on that. When you’re working with multiple mixers all on one location, where you need lots of channels across several bodies, in a hurry, Lectrosonics is the only way to get that done.”