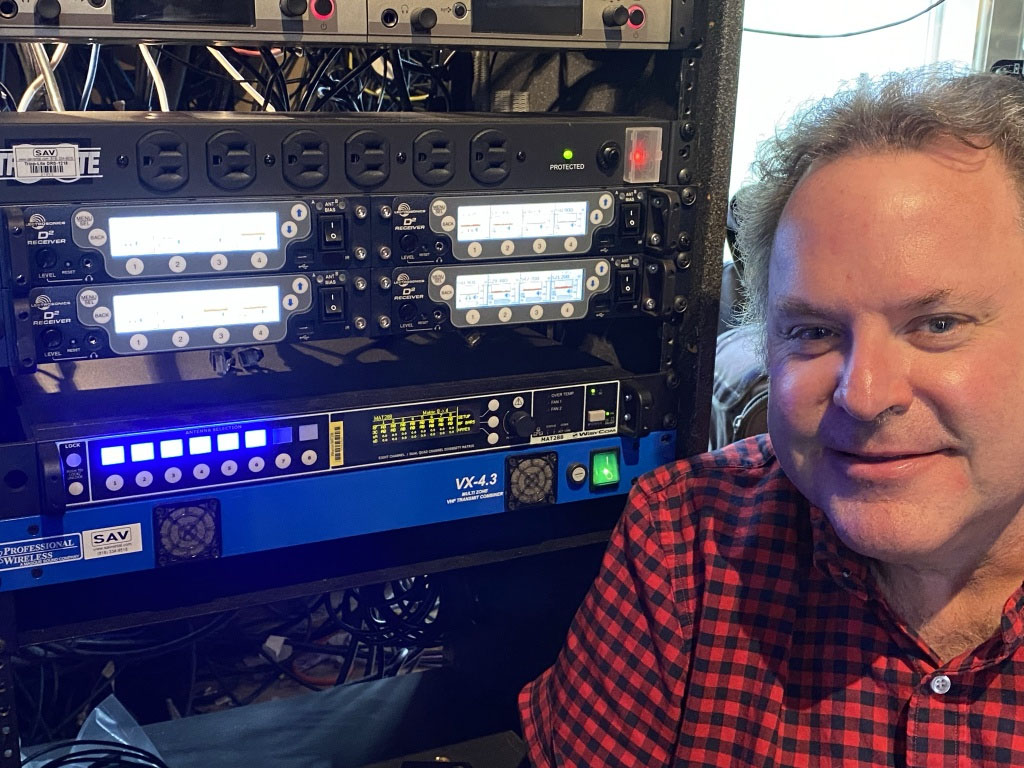 “We had been using three Lectrosonics Venue racks and SM-series transmitters since the show started in 2012,” says audio supervisor Mike Dooley, whose CV includes The Biggest Loser and beloved game show The Price Is Right. “I loved how well supported they were. But when we changed rental houses, to SAV Entertainment out of Glendale, we took the opportunity to go all digital. I have to say that while the range and sound quality of the Digital Hybrid stuff was fantastic, the fully digital gear is even more amazing.”

With the RF spectrum available for TV production ever tightening, one feature that attracted Dooley’s immediate attention was the D Squared system’s built-in encryption. “NBC Universal has a frequency coordinator who assigns all our frequencies and has mostly kept us safe,” explains Dooley. “But talent and guests wear their mics all day on this show, and of course talk privately off-set. Sometimes it’s possible that a mic is picked up somewhere it shouldn’t be. With the encryption, I no longer have to worry about that.”

“Working with a frequency coordinator also makes wideband important,” adds Joe Casanova, co-founder of SAV, along with Brady Belavek. “The DSQD receiver is tunable from 470 to 608 MHz, so there’s no need to switch out modules for different blocks if the coordinator gives you something unexpected. I’m also not aware of any other receiver that has four channels in a half-rack, which let them pack 16 channels into just two rack spaces. Between that; the Dante, Ethernet, and USB connectivity; the super low latency; and the built-in multi-coupler, the DSQD really checked all of our boxes.”

“Agreed,” Dooley replies. “With the way the DSQD uses the spectrum, Universal has been able to give us the best frequency coordination we’ve ever had.”

Dooley maintains a commanding view of the entire system’s status and performance via Lectrosonics Wireless Designer software. “I have an A2 [assistant mixer] but he’s running around and not always able to sit with the receiver rack,” he explains. “Right from the mix room, I can see the activity on all the frequencies and the transmitter battery levels in Wireless Designer. This comes in on a dedicated Ethernet port so there’s absolutely no latency in terms of the information being up-to-the-second.”

The nature of the Home & Family set can bring range and obstacle challenges, but as Dooley relates, the D Squared rig has not missed a beat. “The set is basically an entire house, inside and out, constructed on the backlot of Universal Studios in Hollywood,” he says. “There are front and back yards, a deck, a garage, a full kitchen, and lots of rooms — and we use them all! With the previous system, we managed just fine with an occasional rare dropout. With the D Squared, it’s just bulletproof. We’ve actually reduced the number of ALP antennas placed throughout the house to six instead of eight, and the reception is better. We’re a few weeks into season 9 as I’m talking to you, and I have not lost a signal once, even for a moment.”

“I can vouch for that, too,” Casanova chimes in. “I haven’t had a single phone call about an issue, and in the rental business it’s a rare thing to be able to say that. Anytime I hear the word Lectrosonics, I just think, top notch. It’s simply the best there is for television, film, and broadcast.”

“Absolutely,” Dooley concludes. “When I started as a field mixer, I was using another brand and was having some frustrations. A colleague said, ‘Come on over to Lectro where it’s nice and clean.’ That’s a quote. I did, and it was like stepping into another world.”