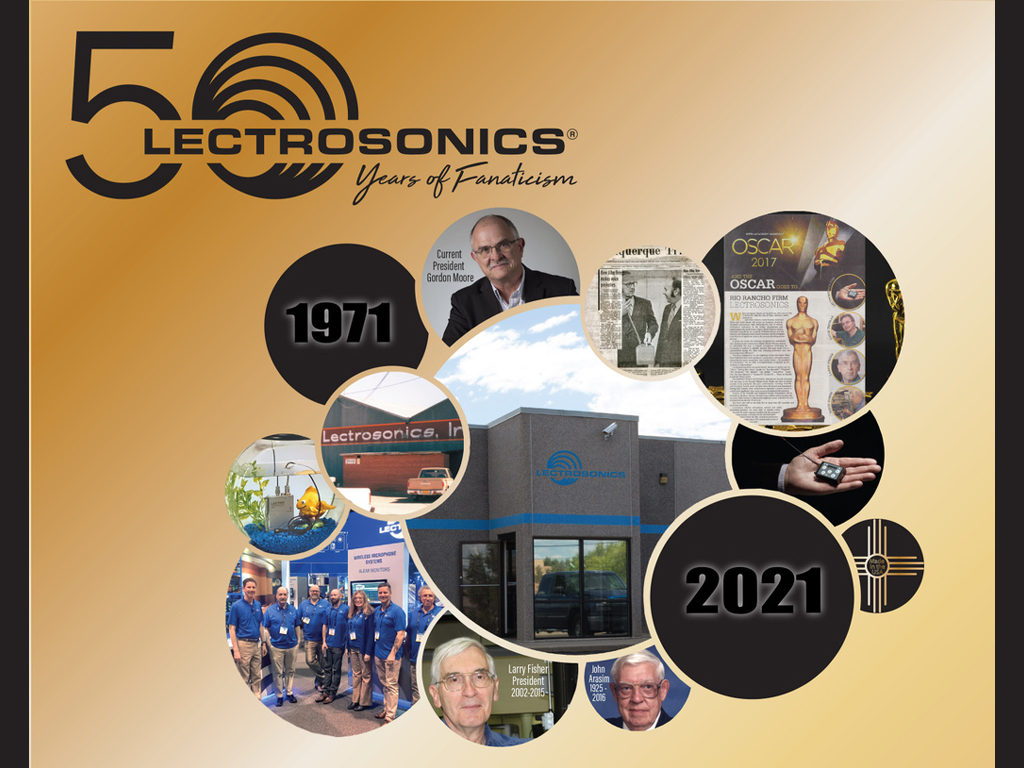 “Our employees have had free reign to imagine, challenge, and invent with the reward of their innovations becoming an integral part of television and movie sound recording, news gathering, broadcast, theatre, and installed sound.  Thank you to all our amazing partners and customers.  What a fun ride!”

Rio Rancho, NM (March 23, 2021) — Lectrosonics, recognized the world over as a leading manufacturer of wireless microphone systems and audio processing products, is very proud to announce that this month, the company is celebrating its 50th Anniversary. Founded in March of 1971 in Albuquerque, New Mexico, Lectrosonics products are used in countless broadcast, television, theatre, film, live performance and music productions worldwide.

At its founding, Lectrosonics’ first product was the Voice Projector series of portable PA systems and lecterns. In 1975, the company’s first wireless microphone was added to the product line. Shortly thereafter, these products were marketed under the Freedomike® trademark.

By the 80s, Lectrosonics found success in the broadcast market with its plug-on transmitter and compact receiver for electronic news gathering and documentary production. Around this same time, the company’s engineering team had begun working on audio processing equipment targeted at the installed sound market. The first product was the MAP or Modular Audio Processor system, consisting of a card cage design with a variety of automatic mixing, signal processing and logic control modules. The current ASPEN Series audio processors have been installed all over the world in courtrooms, boardrooms, and other A/V installations.

The wireless IFB (or interruptible foldback) system was introduced in the late 90s and became a workhorse product in broadcast and film production. In 2020, after 19 years on the market, the legacy IFBR1a was replaced with the smaller and more modern IFBR1b, offering dock charging, 10 presets and “talent friendly” size and weight.

By 2002, the company’s highly acclaimed Lectrosonics Digital Hybrid Wireless® technology was introduced and Lectrosonics grew dramatically. In 2017, the company received the Academy Award for Technical Achievement for this technology since it has been used in the majority of feature films for more than a decade.

In 2016, the company introduced the SSM micro-bodypack transmitter specifically for the professional theatrical market. This product has been used on numerous Broadway shows and tours, including The Lion King, Pretty Woman, Beetlejuice, King Kong and Frozen.

In 2017, the ground-breaking Duet digital IEM/IFB system was introduced – the first one with Dante connectivity and the option for AES256 encryption. 2016 marked the introduction of Lectrosonics PDR (Portable Digital Recorder), followed in 2018 by the SPDR (Stereo Portable Digital Recorder,) and in 2020 by the MTCR (Miniature Time Code Recorder) the acclaimed micro-sized unobtrusive digital recorders.

And the recently introduced digital wireless microphone products including the D Squared line, the DCR822, and the Digital Camera Hop units offer unprecedented performance, ease of use, and robust construction and have found rapid acceptance worldwide.

Today, all Lectrosonics products are still 100% made in the US factory in Rio Rancho, New Mexico, are essential tools for the broadcast and film production communities, and are regularly found throughout the music industry as well as live sound reinforcement for the pro touring, installed sound, theater and church markets.

“From wooden lecterns in 1971 to Academy Award-winning wireless microphones today, the past 50 years at Lectrosonics have brought amazing technological changes both in the products we make and in the markets we serve,” says Gordon Moore, Lectrosonics President and a 33-year company employee.  “We advanced from through-hole components with hand assembly to surface mount technology and CNC machining.  Our employees have had free reign to imagine, challenge, and invent with the reward of their innovations becoming an integral part of television and movie sound recording, news gathering, broadcast, theatre, and installed sound.  Thank you to all our amazing partners and customers.  What a fun ride!”