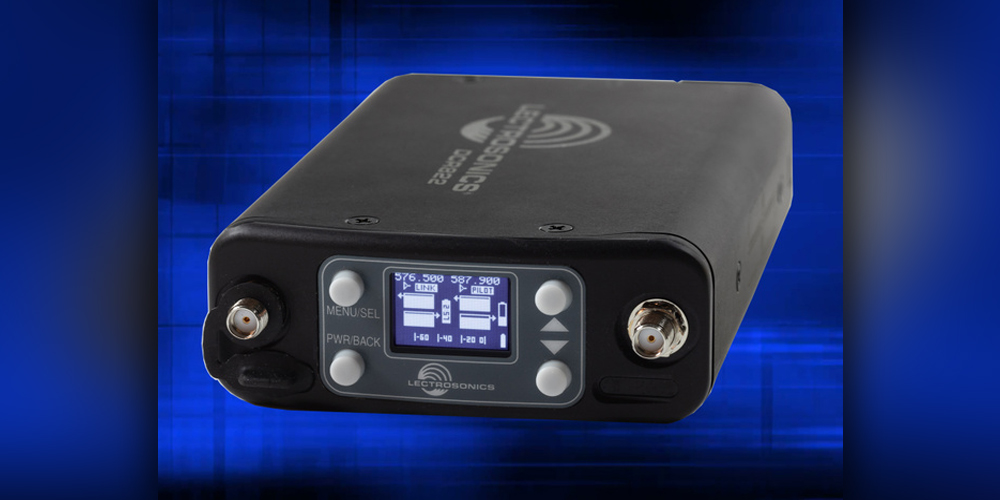 Rio Rancho, NM (October 6, 2020) – Lectrosonics is pleased to announce the introduction of the DCR822 digital, dual-channel portable receiver. The new receiver is compatible with all the current Lectrosonics mono and stereo digital transmitters and is backward compatible with any of the Digital Hybrid Wireless® transmitters made in the past 18 years. The DCR822 provides two independent receiver channels at the highest level of RF and audio performance available with a versatile feature set in a compact design for field and location production. The DCR822 offers next generation capabilities that surpass even the company’s UCR411a, the acknowledged gold standard for RF performance in the industry.

The DCR822 tunes across 144 MHz (A1B1 version) or 155 MHz (B1C1 version) and offers over 6000 frequency choices. Settings can be made from the front panel with tactile buttons and high-resolution LCD interface, making the unit ideal for use in portable bag systems and on sound carts. An RF spectrum analyzer and SmartTune are built into the receiver to alleviate interference problems in an increasingly congested RF spectrum. 2-way IR sync makes quick work of setting up matching transmitters. The new receiver includes a USB jack on the back panel for connectivity with the Lectrosonics Wireless Designer software for frequency coordination and RF system monitoring.

The RF gain stages in the front end use a newly developed design to provide low noise RF amplification, excellent sensitivity and extremely low susceptibility to intermodulation and de-sensitization with an IP3 (3rd Order Intercept point) of +15 dBm. The DCR822’s Vector Diversity subsystem smoothly and continuously combines RF signals from two receiver front ends per channel, with differing phase angles to obtain maximum energy. This method delivers clean, artifact-free performance in all modes and can take transmissions compromised by multipath interference and reassemble them into rock-solid signals. Along with Vector Diversity on each receiver channel, the two channels (four receiver front ends) can be used together for a single Frequency Diversity channel operating on two different frequencies for full redundancy.

The mechanical design of the receiver fits into the same dimensions as the legacy UCR411A so that existing mounts can be used. The DCR822 combines field-proven features developed over many years of experience in motion picture and television production. To decrease weight, the new receiver provides two independent channel receivers in one unit powered by 4 AA Lithium batteries or external DC. The receiver is also equipped with a microSD card slot for data transfer such as firmware updates and frequency group information. The machined aluminum housing and panels are surfaced with a hard-anodized finish with laser etched markings to withstand the rigors of field production. Audio outputs are via two locking TA3M connectors, with either analog mic/line level or AES3 digital outputs selectable in the menu.

In addition to the data transfer capability via the microSD card slot, The DCR822 can record audio channels directly from the receivers onto the card in the industry standard .wav (BWF) file format at 24 bits/48 kHz for compatibility with any audio or video editing software. The receiver also incorporates Powerful AES 256-CTR mode encryption, with four different encryption key policies available including Universal (common to all Lectrosonics D2, M2X and DCHX units), Shared (great for sports coverage), Standard, and Volatile (one-time use key).

“The DCR822 represents the state of the art in portable receiver performance,” says Karl Winkler, vice president of sales & marketing at Lectrosonics. “The UCR411a has long been revered as the top choice of receiver for tough jobs in difficult RF environments. We knew we had to make something that was able to top this performance, yet bring in a host of modern features and design. That’s what the DCR822 is all about. I’m very proud of the design team’s accomplishments with this product.”

The DCR822 will be available worldwide from Lectrosonics Authorized UHF dealers starting in Q4, 2020. MSRP: $4,740