An automatic mixer is a hardware/software solution to two fundamental issues that arise when multiple microphones are used in a sound reinforcement system:

Acoustic feedback occurs when the sound from a loudspeaker system re-enters the microphones and is then returned to the loudspeakers. This recirculating loop (oscillation) will produce either sustained “ringing,” or if the gain is high enough, loud howling or squealing when the system goes into runaway feedback.

Intelligibility in a sound system is a measure of how well listeners will understand what is being said. Distortion of the sound, accompanying noise and a mix of several different voices all have a destructive effect on intelligibility.
Automatic mixing attenuates inactive or lesser used microphone channels to address the issues listed above. There are several different approaches to auto mixing ranging from simple gating (turning channels on or off) to more sophisticated and natural sounding techniques using continuous gain modulation.

Correctly implemented, an auto mixer will maintain individual channel gains so the final mix of all channels is equal to one microphone at full gain. This design goal and its result is normally expressed as the Number of Open Microphones = 1, or NOM = 1. When this goal is achieved, a sound system will be just as stable against acoustic feedback with many microphones as it is with just one microphone.

The ASPEN auto mixing algorithm operates in the same manner as a human operator mixing a conference manually on a console. Unused and less active mics are turned down and those in use are turned up.

Auto mixing is also very beneficial in teleconferencing even when there is no sound reinforcement system in place. Background noise gathered by inactive microphones and echo that returns from the far end of a conference are both suppressed, which improves the intelligibility of the system significantly.

All active input channels are summed, and then the level of each channel is compared to the total sum. A gain value is applied to all channels so that the sum is equal to one channel at full level (NOM=1). Channels are never turned off, but instead, the gain is adjusted continuously to eliminate abrupt level changes that are audible.

The patented algorithm includes a unique adaptive skewing process that applies a subtle priority to the channel that has been the loudest for the longest period of time. The skewing further reduces the gain on inactive and lesser active channels and prevents comb filtering by never allowing two channels to be mixed at the same level. 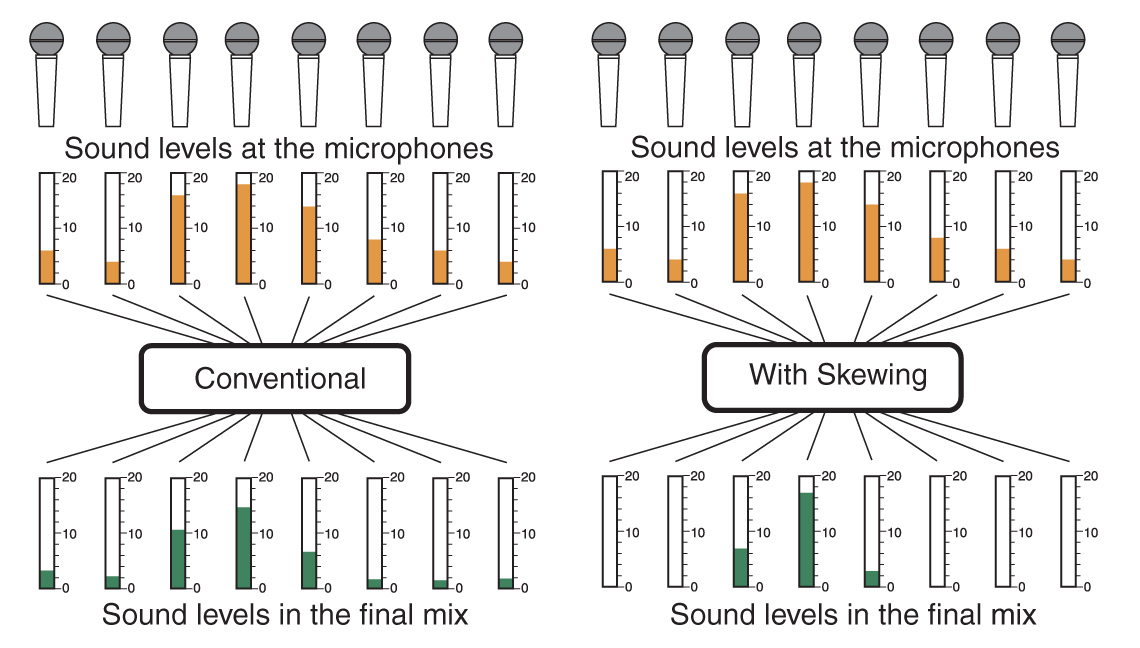 Auto Mixing at the Matrix Crosspoints

Conventional auto mixing applies gain control or attenuation at the inputs to the mixer. This is useful in a basic installation, but it imposes additional complexity when a microphone signal is to be used for multiple purposes, such as sound reinforcement, recording and teleconferencing at the same time.

ASPEN auto mixing takes place at the matrix crosspoints, which allows a single input signal to exhibit a different behavior at different outputs. For example, input channel 4 could be configured for Auto behavior (normal auto mixing) in the mix feeding at output 6 for local sound reinforcement, Direct behavior (no attenuation) in the mix feeding output 10 for recording, in the Override mode as the dominant (chairman mic) at another output, and in the unique Phantom mode at another output for mix-minus zoning in sound reinforcement. The input is routed to multiple crosspoints, each with a different mixing mode.

The auto mixing mode is set in the matrix display in the control panel software. There are five different behaviors available:

The desired mode is selected from a dialog box that opens with either a right or left click of the mouse. 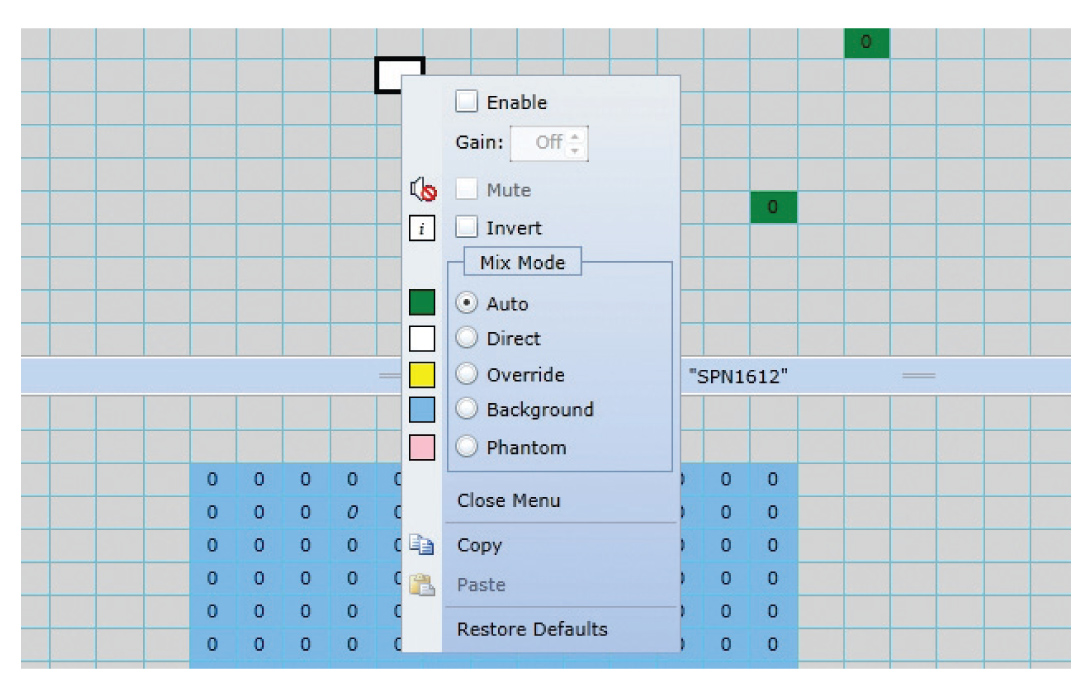 The Phantom mode is used to combine the auto mixing signal contribution in multiple zones without delivering the actual audio signal into the zone. This is used in mix-minus reinforcement systems to let every microphone in the overall room participate in the auto mixing gain allocation, yet preserve the audio signal routing defined in the mix-minus setup.

Auto Mixing in a Teleconference

This auto mixing algorithm, working in conjunction with the AEC in the ASPEN Conference processor, provides impressive echo cancellation.

Auto mixing in the local reinforcement system suppresses echo returned to the far side by lowering the level of inactive and less active microphones. This reduces the echo return path for far side signals delivered by the local loudspeakers.

The ASPEN AEC is uniquely able to maintain convergence during the auto mixing activity. It will not diverge during double talk, and it will continue to deepen the convergence at every opportunity when the far side signal is louder than the near side signal.

NOTE:  Refer to the white paper entitled Acoustic Echo Cancellation for details on the background and performance of the ASPEN AEC.