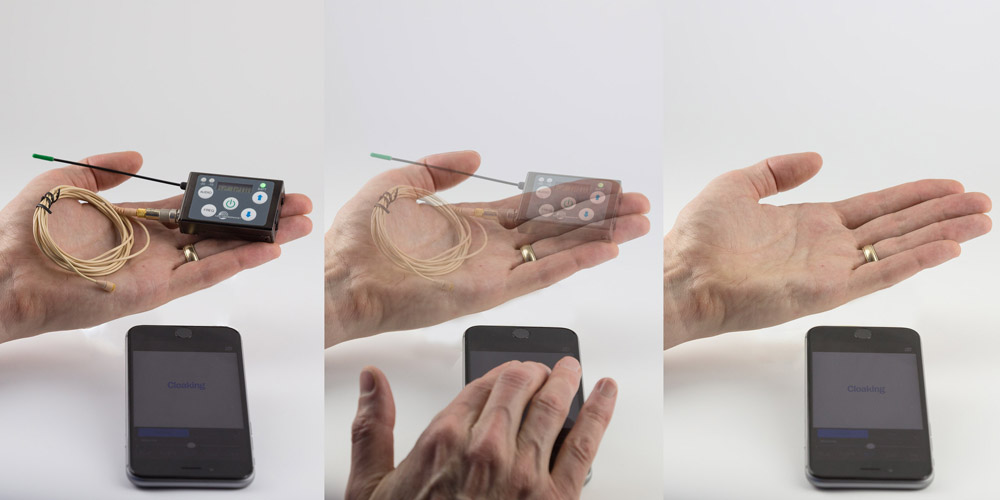 “For applications where even the SSM isn’t small enough”

Rio Rancho, NM (April 1, 2018) – Lectrosonics is pleased to introduce “Cloaking Mode,” a new feature for the SSM micro bodypack transmitter that renders the unit invisible. Firmware version 4.1.18 includes a mode where the DSP (Digital Signal Processor) cycles are cranked up so fast that the electrons traveling through the unit start to interact with the materials in the rest of the unit in a novel way only recently discovered by physicists.

“Normally, these kinds of interactions are something only seen by scientists working with large-scale particle accelerators,” stated Karl Winkler, VP of Sales & Service at Lectrosonics. “But, after reading one of those fascinating articles in Scientific American magazine, our engineers thought we should give it a try. I’m glad we did – the results are nothing short of spectacular!”

Since the attached electret lavaliere or head-worn microphones receive a bias voltage from the transmitter, the microphone is also rendered invisible when the cloaking feature is engaged. The only downside is that the battery life is drastically shortened, due to the extreme increase in current demand from the DSP running as such a fast rate. The SSM normally runs for 6+ hours on a freshly charged LB-50 lithium ion battery. But with the Invisibility Mode engaged, the battery life is shortened to 30 minutes. And, when the battery dies, the unit becomes visible again.

And since the SSM running in Cloaking Mode gets hot from the increased DSP cycles and resulting battery current drain, it may be possible to see the unit if viewing it with an infrared camera like those used for “night vision” and some security cameras.

The new firmware version 4.1.18 is free can be downloaded from the Lectrosonics web site. The cloaking feature is then engaged by using the popular Lectro RM app, available for smartphones from a 3rd party developer.

Watch this video for more on Cloaking Mode: https://youtu.be/Q2f0wPDjGzY.