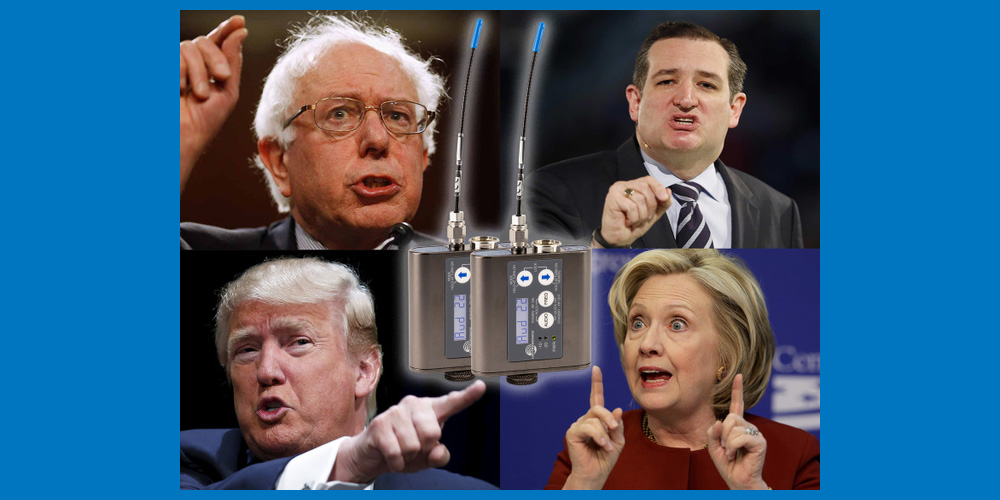 Rio Rancho, NM (April 1, 2016) - A new battery technology and firmware development from Lectrosonics will allow all their current model transmitters (SM Series, LT, LMb, SSM, WM, HMa and HHa) and some previous models to be powered completely by political discourse during debates, campaign speeches, by news pundits and any other political speech-related verbal blather.

Using newly developed algorithms, speech patterns are analyzed by the on-board DSP (Digital Signal Processor) and compared to a database using the party neutral Content Comparator™. When any speech patterns are recognized as politically related, the Rhetoric Rectifier™ then coverts the target speech into Argument Amperage™, which then charges the Blather Battery™*, an ultra-efficient, patent pending battery cell technology that must also be installed for the process to work. The more heated the debate, the more power generated and stored. In addition, the Content Comparator also evaluates the speech patterns using another related algorithm, the Fact Frequency Finder™, which develops more power the fewer facts per minute are present in the verbiage.

"We feel we are really onto something this time" states Karl Winkler, Vice President of Sales at Lectrosonics. "Just about everyone is annoyed by the majority of political speeches, campaigning and the like. Most people wonder if there's a way to develop something positive out of it. We think we have found that way via this new hardware and software development. And, it's just in time for the real meat of the 2016 election process!"

The new firmware and battery technology will already be installed on any new transmitter shipped from the factory, and can be installed on any previous model transmitter from the Digital Hybrid Wireless® Series for a small service charge. For each minute of a standard political speech or campaign debate, a typical transmitter will be charged enough to run for an additional minute and a half, making practical transmitter run time nearly infinite in these circumstances. Any discussion of "Hot-button" issues further increases run time as well.

*Caution: Blather Batteries must be stored properly in sound-proof containers when transported in any campaign aircraft or bus due to potential over-charge situations and possible fire hazard.