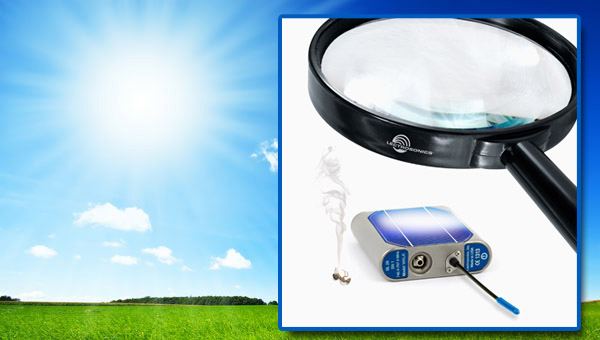 Rio Rancho, NM – April 1, 2013… Lectrosonics is introducing the world's first solar-powered wireless microphone transmitter, the WXLR. The new transmitter is based on the idea that today's solar cell technology is sufficiently advanced for use on portable electronic devices. The new WXLR was based initially on the previously introduced WM water-tight transmitter.

Being fanatics, Lectrosonics engineers aimed to simplify the design even further and make the housing even more bullet proof by eliminating the battery compartments and associated doors altogether. While discussing solar power as a potential option, one engineer realized that solar insolation is almost exactly 1 kW per square meter or 0.65 Watts per square inch in full sunlight. Solar insolation is the available power from the sun that strikes the earth's surface after atmospheric losses.

The WXLR case is 2.98" by 2.55" equating to 7.6 square inches. With new multiple-junction, single crystal gallium arsenide solar cells approaching 39% efficiency, a custom cell sized for the WXLR case could produce 1.92 Watts in direct sunlight. Since the unit only uses half a Watt to operate at the two lower power settings of 50 and 100 mW, there is more than enough power to run the transmitter and charge permanently installed internal Li-Ion batteries, even after overcoming small conversion losses.

What really makes the concept workable is the 30% Federal Tax Credit for solar installations combined with the 10% State Tax Credits. The 10% tax credit is allowed by progressive states such as New Mexico and fortunately, New Mexico is where Lectrosonics is located.

Lectrosonics has always been a leader when it comes to providing accessories for our customers to enhance utility and user experience. The first accessory, the WXLRMAG "supercharger", is a 10" magnifying glass that is used to concentrate the sun's rays onto the WXLR case, reducing charging time (vs. plain sunlight) from two hours down to 30 minutes. The user is cautioned that the WXLR will become extremely hot when charged in this manner. A special set of insulating gloves is included with the WXLRMAG.

The second accessory, the WXLRNIGHT, is used when the WXLR must be charged at night or in rainy weather. It uses a 300 Watt OSRAM Ultra Vitalux sun lamp tanning bulb. This bulb with its stand and reflector can be plugged into any AC outlet such as those commonly found in hotel rooms and on sound mixer carts. This accessory charges the WXLR in approximately 2 hours and can charge 4 WXLR transmitters at once. Other accessories will be released in the near future.

Lectrosonics intended to release the WXLR in time to coincide with the Vernal Equinox on March 20 (first day of spring) when the sun is directly above the equator. However, unforeseen supply issues caused a delay of 12 days for the introduction. MSRP: $2,395 for the WXLR, $79.95 for the WXLRMAG and $295 for the WXLRNIGHT. Spare bulbs are $90.

Sorry, Charlie T., this product is not for use or sale in Seattle.