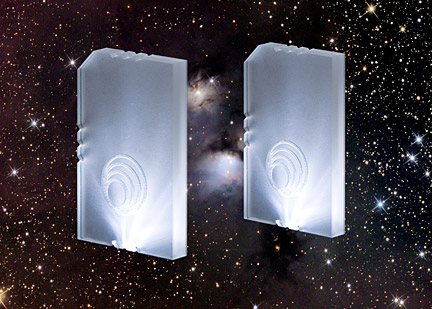 Rio Rancho, NM – April 1, 2009… Lectrosonics, recognized the world over as a leading manufacturer of wireless microphone systems and audio processing products, has announced the introduction of an entirely new, two-way wireless microphone system based on quantum physics. The new QP1 System operates on the principal of “entanglement” between atoms. “This new system has been in development for several years,” states Larry Fisher, President of Lectrosonics, Inc., “and it has cost us millions of dollars, thus necessitating an extremely high price.”

By manipulating photons emitted from each of two atoms of the rare-earth element ytterbium, and guiding them to interact—thus becoming “entangled”, a permanent communication link can be established. Then, by carefully housing each of these entangled atoms at either end of the link, the two halves can be separated by great distances and yet instantly (not the sludge-like speed of light), two-way communications can be maintained.

Due to the extremely high bandwidth available with this arrangement, excellent audio quality can be preserved, without the use of a compandor, DSP, or even any RF spectrum at all, thus making the QP1 System perfect for the post-DTV, post-White Space world in which we now live. Signals transmitted via this method can include full-program audio, uncompressed 1080P video, or any kind of data, as well as a talk-back channel for interruptible fold-back (IFB) or a confidence channel for monitoring. Not only can the QP1 System cover great distances instantly, it can allow users to communicate between different dimensions. “Say you’re in production for a popular television drama,” describes Fisher, “and your island disappears. No problem – you can still get a flawless dialog track.”

The frequency response of the QP1 System is 0 to ∞Hz. The enormous power requirement for the system has been solved with a tiny, on-board dark energy battery, housed in unobtanium alloy. By combining dark energy with the white noise from typical lavalier microphones, the QP1 will operate for many decades before battery replacement is required. “The only strange aspect to this product that our guys noticed in the lab,” states Fisher, “is the problem of superposition. This means that the ‘data bit’ represented by the photon can be either on or off, or both at the same time. You can't directly observe superposition, because the act of measuring the bit affects it and forces it to become either on or off. So it’s sort of like the Schrodinger's Cat of audio, if you know what I mean.”

The QP1 System is set to first be seen by the public at the 2009, 2109 and 2209 NAB conventions, simultaneously, at the Las Vegas Convention Center, or whatever it is called 200 years from now. Price is “extremely high” and availability is TBA.