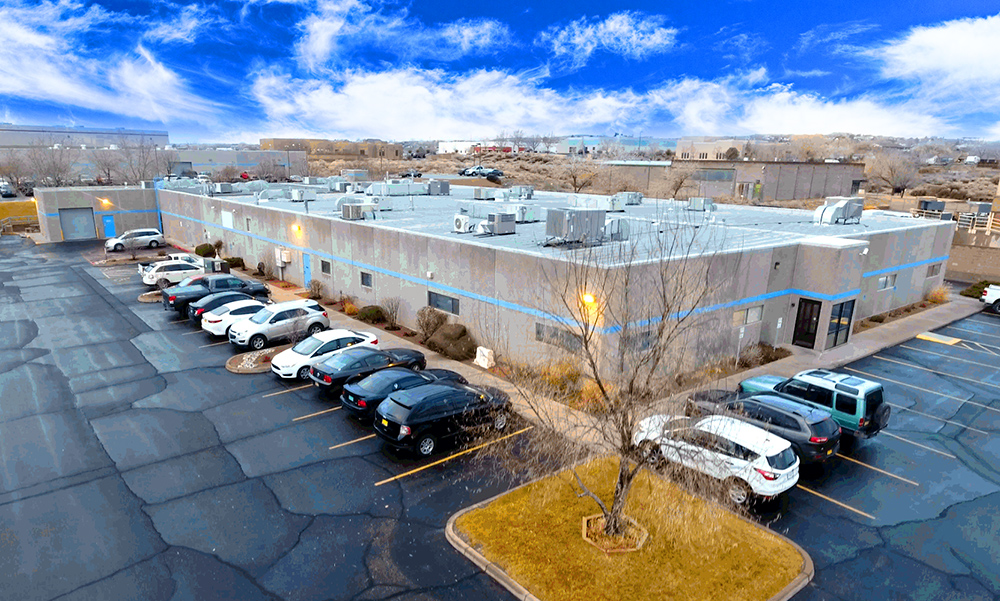 Lectrosonics is a U.S. company located in the city of Rio Rancho in the heart of New Mexico. With a continued focus on quality and innovation since 1971, Lectrosonics is well respected within the film, broadcast, music, and theater technical communities. We have a strong history of delivering products that satisfy your needs for quality wireless technology with excellent customer support and service.

Lectrosonics provides consulting to its customers as part of its customer service for product sales. Lectrosonics will also assist you with sound system component selection and design.

Lectrosonics offers products that are built to last. You can see just how our reputation for "built to last" products. You can also see what other industry professionals are saying about our products in magazines and YouTube, keep up with our latest news and announcements by signing up with us on our social media account Facebook, Twitter, Pinterest & Instagram.

A History in Audio

An energetic attitude and the spirit of innovation continue at Lectrosonics. The philosophy and business plan is simply:  “Build the best product we know how to make, and support it with the best service we can possibly provide.”

The Articles of Incorporation were filed with the State of New Mexico on March 22, 1971 to found a new manufacturing company in Albuquerque, New Mexico. The doors opened on May 26, 1971. The Voice Projector product line was unveiled and the first production unit was donated to the Albuquerque Police Department in September. A bit of local fanfare included a newspaper article.

The Voice Projector product line consisted of several over-shoulder portable PA systems and lectern PA systems. The cabinets were made of wood, so the larger manufacturing space was a wood working operation. Circuit boards were built with through-hole components, hand soldered on workbenches in a different area in the building.

In 1975, the first wireless microphone was added to the product line, using a design commissioned from another manufacturer. Soon after, the company invested in its own engineering resources to improve the performance. The final design was completed and marketed under the Freedomike® trademark. Wireless microphones were readily accepted in existing markets and the product group became key to the growth of the company.

The “Mouse Years” lasted a little over two decades, beginning in the late 1970’s. Three battery powered instrument amplifiers were designed and the trademark The Mouse® was registered along with the attendant logo. The products c 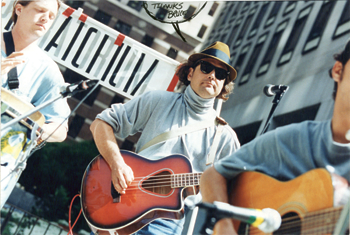 aught on in New York City and San Francisco where street musicians needed the portability and economy of rechargeable battery power. In New York, every music store along 48th street stocked the products and within a few years thousands of them could be found all over Manhattan. It was not uncommon to find a gathering of street musicians in a coffee shop each morning getting ready for the day’s work with a bank of various Mouse amplifiers connected to charging stations along the wall.

The first three products were named Mini Mouse, Mouse and Moose. Mini Mouse was a small AA battery powered practice amp with a 6-inch speaker. Mouse was the most popular of the three, operating on a pair of rechargeable gel-cell batteries with an 8-inch speaker and enough power to be heard above the street noise in Manhattan. Moose was a Mouse amplifier in a larger cabinet with an 8-inch speaker tuned to lower octaves for bass instruments.

The last two models were introduced in 1984:  Maxi Mouse for guitar, microphone and keyboards, and Moose II for bass instruments. Dual inputs allowed the musician to mix an instrument with a microphone, accompany pre-recorded tracks, or mix two separate instruments. The last production run of Maxi Mouse took place on September 25, 2000.

The spirit of the Lectrosonics family during the 1980’s continued to grow along with the product line and sales in general. With new management in August of 1981 under the leadership of John Arasim, an emphasis on mechanical engineering and manufacturing capabilities ushered in the beginning of a new era in wireless microphone development. Machining capability opened up new possibilities and new machined aluminum housings were designed to improve the ruggedness and appeal of the product line.

Outdoor portable PA systems with built in wireless microphones began with the VP300 in the early 1980’s, followed by the Long Ranger a few years later. Being unique products, markets and dealer networks were quickly developed to serve auctioneers and marching band directors. The efficient re-entrant horn and the high power output of the amplifier worked together to produce impressive sound pressure levels. The directional coverage pattern of the horn and the mobility of the wireless microphone allowed ideal placement for broad audience overage and minimal feedback. The Long Ranger has become standard equipment in the targeted markets.

As other electronics manufacturers were moving off-shore, Lectrosonics stayed here at home as the importance of being made in the USA began to grow. Customers appreciated the fact that they could call the factory directly to discuss  any issues they had with the products. This direct feedback was invaluable to the company, and the responsive attitude led to changes in the product designs accordingly.

By the summer of 1988, several new products had proven successful and new markets had been entered. Enough blood, sweat and tears had been shed, and it was time to move on. Move on, that is, to a brand new facility in Rio Rancho, about 15 miles north of the old plant. So the staff of about 30 people gathered the wagons and made the trek north. It was time to expand the machine shop and add newer, faster equipment. A plant wide computer network was installed and software was updated in all departments. The engineering staff was increased to develop products for the newly discovered markets. The television broadcast market had eagerly adopted the plug-on transmitter and compact receiver for ENG and documentary production, and sales were growing quickly. Engineering had begun working on audio processing equipment targeted at the sound contracting and audio visual markets. It was an exciting time and enthusiasm ran high. 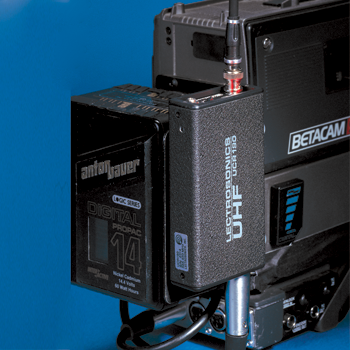 When Lectrosonics decided to enter the broadcast market in the late 1980’s, there were 480 VHF television stations in the USA whose primary activity was local news. At that time, professional camcorders were beginning to appear and VHF televisions stations were moving to “one man band” crews for news gathering, eliminating a dedicated audio person in the crew. The camera operator was responsible for picture and sound since the audio was recorded in the camera. 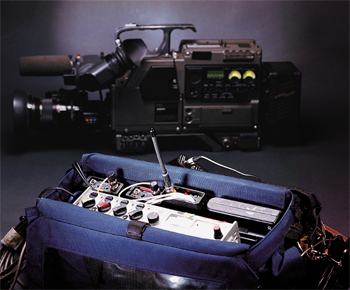 Time to air was faster using wireless and the station that aired the story first captured the largest audience. The plug-on transmitter let them use their familiar microphones, and the compact receiver could be mounted directly on the video camera. The announcer grabbed the preferred microphone, the camera operator followed and away they went. We imagined selling 10 wireless systems to every news producing VHF station in the country, and 4800 systems seemed like a lot at the time.

When CBS first began production of the program 48 Hours, the required equipment list specified what we now call a “bag system.” A typical crew consisted of two cameras and a portable audio rig in an over-shoulder bag that included a mixer, wireless receivers and transmitters to deliver the mixed audio to the cameras. In many cases, the audio recordist also handled a microphone mounted on a boom pole. Obviously, size and weight were key concerns and once again, the compact receiver answered the call and sales into the television broadcast and motion picture markets continued to grow.

The entry into the sound contracting market took place in 1990. A young engineer was added to the engineering group to develop the product line. The first product was the MAP (Modular Audio Processor) system. It was a card cage design with a variety of automatic mixing, signal processing and logic control modules that allowed the sound system designer to customize the hardware for each installation. The automatic mixing algorithm was an expansion attenuation type with four channels on each plug-in card. Over the course of four years, 22 different MAP modules were designed and put into production. A lot was learned about the contracting business, and our footprint in this market began to grow.

Another engineer was added to the audio products design team and production of the AM Series analog signal processors began. At this time, there was still a question about how well a computer controlled audio processor would be accepted in the contracting markets. That issue did not last long, however, as designers discovered effective new solutions to age old problems. The combination of automatic mixing and matrix signal routing significantly reduced acoustic feedback and background noise, and earlier objections to computer control vanished. Mix-minus signal routing has now become standard practice.

The years from 1995 through 2002 saw modest growth, but an expansion of production equipment in the factory and increased engineering efforts to develop new products. The wireless IFB system was introduced in 1998, and became a workhorse product in broadcast and film markets. Engineering of other new products was also underway at that time, but the products were complex and involved the coordinated efforts of several engineers. The designs took considerably longer than those for earlier products due to the application of new technology, firmware and software. 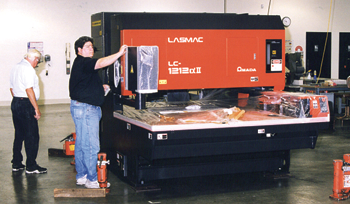 Laser sheet metal cutting was added to the machine shop in 1998, followed by newer and faster metal folding equipment. Productivity improved significantly to handle the increasing demand for folded aluminum housings and brass shields used in wireless equipment. The precision of the laser cutting process also eliminated secondary operations that were needed previously to deburr edges and prepare the parts for finishing. Three axis milling machines were kept busy making aluminum housings for wireless transmitters and receivers. It was a good time to update and expand production equipment to handle the increases in order input promised by the new models being developed. 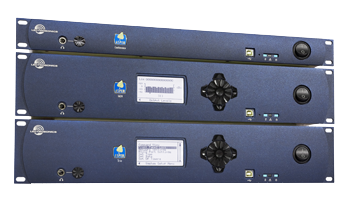 By 1999, SMT (Surface Mount Technology) circuit board production was well underway. ATE (Automatic Test Equipment) was initiated in conjunction with surface mount to improve consistency and reduce variations from one production lot to another. ATE is a pass/fail process where a unit must meet performance criteria within a defined window of tolerance. This was the end of variations due to different tuning and alignment techniques that were encountered previously when human technicians aligned the circuitry. ATE applied a specific tolerance, which in some cases required design changes or adjustments to the allowable target ranges. In brief, circuit board production during this time period moved to the next higher level of consistency and quality.

In 2002 the fruits of several years of engineering effort began to appear. The Digital Hybrid Wireless® system and DM Series processors were introduced. Other new products in development for a number of years were steadily released into production. Growth took an upswing. One by one, the new products appeared, some opening up new market niches and others enlarging our footprint in existing markets. With continued growth and success the staff grew to 120 in 2004. 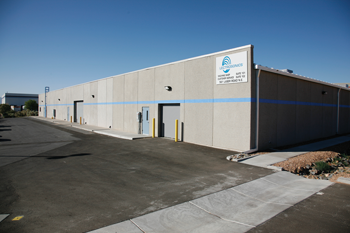 As of mid-year 2010 Lectrosonics added another addition measuring 5000 square feet and the fanatical staff has grown to just over 150.

Where Lectrosonics Is Used